Good weather and few freeze and frost events during this spring are creating the conditions for a large blueberry crop.

The 2013 spring is coming to an end very soon and with that, the risk for spring frost and other undesirable, weather-related events will be gone. So far, the weather has remained within the “normal’ conditions with moderated temperatures and abundant rains that favored a good growth in all berry crops, including blueberries.

Weather conditions during the past seven days have been characterized by an average minimum and maximum temperature of 57 and 77 degrees Fahrenheit, respectively. So far, the growing degree day (GDD) accumulation above 50 F in the region fluctuates between 650 and 690 GDD with an average daily accumulation of 17 GDD. On the other hand, soil conditions are good with plenty of moisture provided by spring rains. Currently, the amount of rain accumulated for the past seven days amounted to 2 to 2.5 inches for a total of 23 inches accumulated since January.

Regarding the different berry crops, strawberries have started the first harvest with very good quality and a very good crop size. Temperate conditions are conducive for a long harvest period that will benefit U-pick berry farms in the region.

On the other hand, blueberries are developing very well. Few blueberry fields were affected for spring frost and growers are reporting problems with pollination in those fields that were affected. Low pollination occurred because flower’s internal organs were damaged by short freeze or frost periods that were localized. However, despite these problems, the berry size is compensating for the lost fruits.

Other problems associated with spring frosts are related to plants with plenty of fruit, but few or sparse foliage (see pictures below). These symptoms are more frequent in fields with varieties where the flower bud opened later than the leaf buds. This season, we are seeing this effect in some fields planted with the Elliott variety and in some other fields where the leaf buds developed earlier than flowers buds. Growers need to prune those frost-damaged shoots to allow new grow to replace the affected canes. No fruit on those canes will mature and by the middle of the summer, the canes will dry up and die. 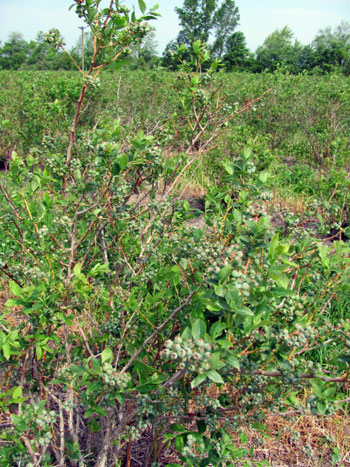 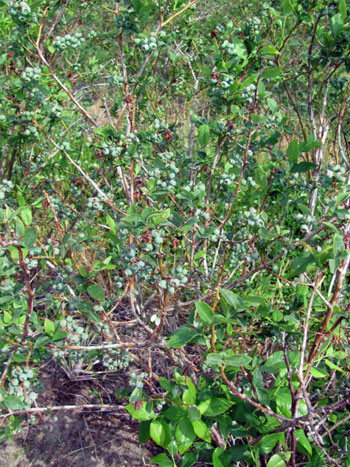 In relation to insect problems in blueberries, during the past few days there has been a strong flight of cranberry fruitworm adults. In those fields where the flight has been reported, growers need to monitor for egglying activity to program the final insecticide application against frutiworms. For cranberry fruitworm control, growers may use Imidan, Asana or other broad-spectrum insecticide that provide excellent fruitworm control. The application of these insecticides has an extra benefit due to their effectiveness against other insect pests occurring at this time that may include blueberry aphids and leafrollers.