From a tiger’s point of view, yesterday’s thoughtful conservation plans might be today’s reason to branch out. An international team of researchers has found a useful way to better understand the tiger’s take on policy.

Twelve years ago, a team led by Jianguo “Jack” Liu at Michigan State University (MSU) showed that China needed to revisit how it was protecting its pandas. Now research on tiger habitat in Nepal, published in today’s Ecosphere journal of the Ecological Society of America, again shows that conservation demands not only good policy, but monitoring even years down the road.

“Understanding long-term outcomes of conservation programs is crucial and requires innovative methods,” Liu said. “Now we’re learning that Nepal’s outstanding efforts to protect tigers are best supported with close monitoring because conservation situations are so dynamic. In both cases, the key is to understand how the people who live near the valued wildlife are faring as well.”

Neil Carter, who recently received a doctoral degree from MSUâ€˜s Center for Systems Integration and Sustainability, follows up on trailblazing research of Liu, his adviser.

Carter has spent years studying endangered tigers in Chitwan National Park in Nepal’s Himalayan lowlands. The park, established in 1973 to protect both the tigers and the area’s biodiversity, was not without cost to the people who live around the area. Those residents depend on the same forests for wood for fuel and building and grasses to thatch roofs and feed their livestock, and the policies that govern it are top-down, with little input from residents. 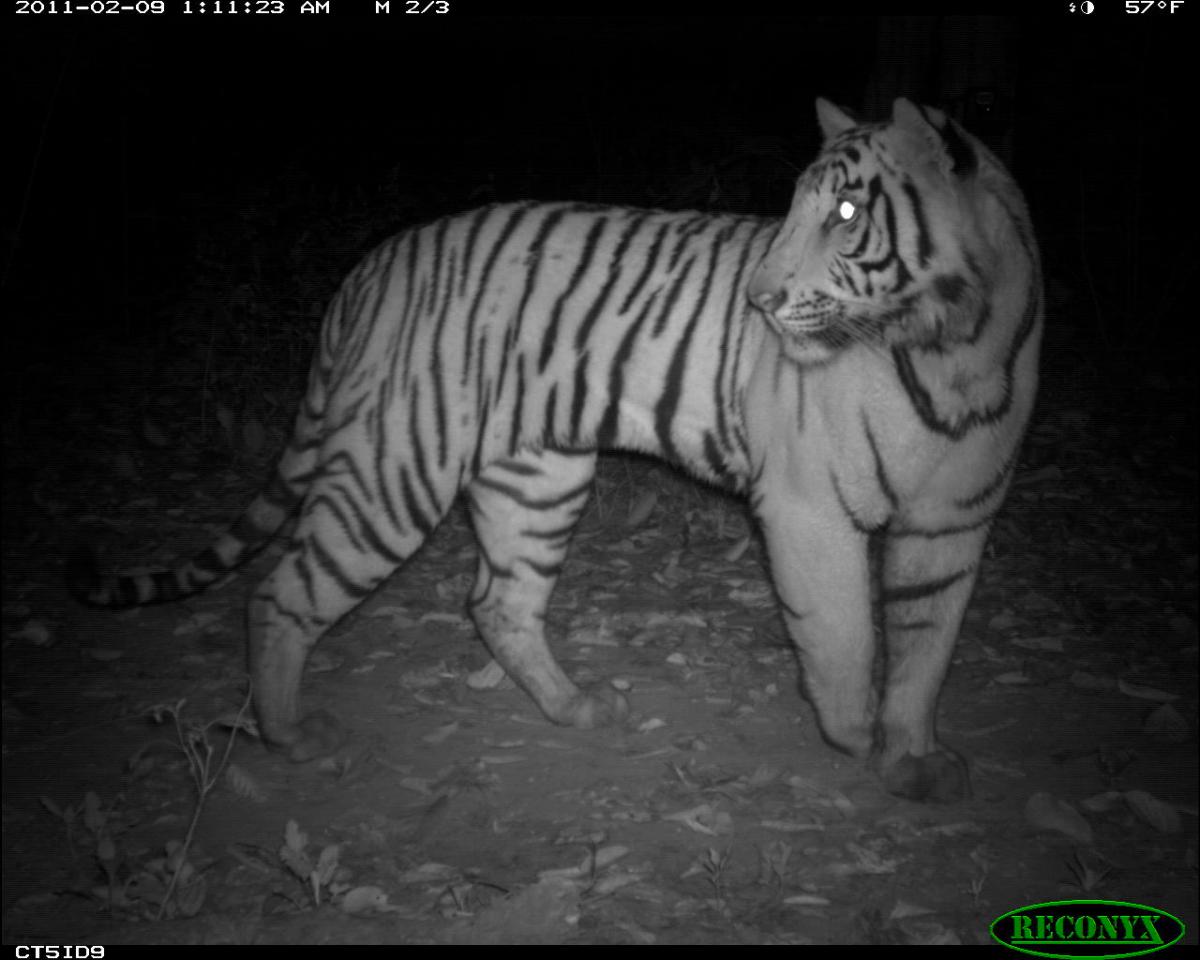 In 1996, Nepal added a buffer zone next to the park to both improve the area’s ecosystem and help improve the livelihoods of the people who live there. In the buffer zone, people are allowed both more access to the forest’s resources and more say in its management.

In Ecosphere, Carter reports a unique approach to monitoring the condition of the tiger’s habitat by combining satellite images and camera trap data on where the tigers were hanging out.

Tigers like grasslands, which support high prey numbers and likely give tigers cover to hunt their prey. Because tigers require large areas, they prefer their cover not be too broken up.

Turns out that growing human populations around Nepal are growing, and with that increasing unauthorized human use of local natural resources, is reducing the quality of tiger habitat inside Chitwan National Park. The tigers are finding friendly neighborhoods outside the park – which is important input, both for the buffer’s policies and the park’s policies.

“Many animals have their ranges extending outside of protected areas,” Carter said. “They don’t know and they don’t care where the border signs are. So areas outside protected areas are important as well.

“In Nepal, we’re finding that there is this middle ground where you can have people using the land and still not only keep land from degrading, but can improve habitat quality. Policies in Chitwan’s buffer zone, such as prohibiting livestock from freely grazing in the forests and community-based forest management, improved habitat quality.” 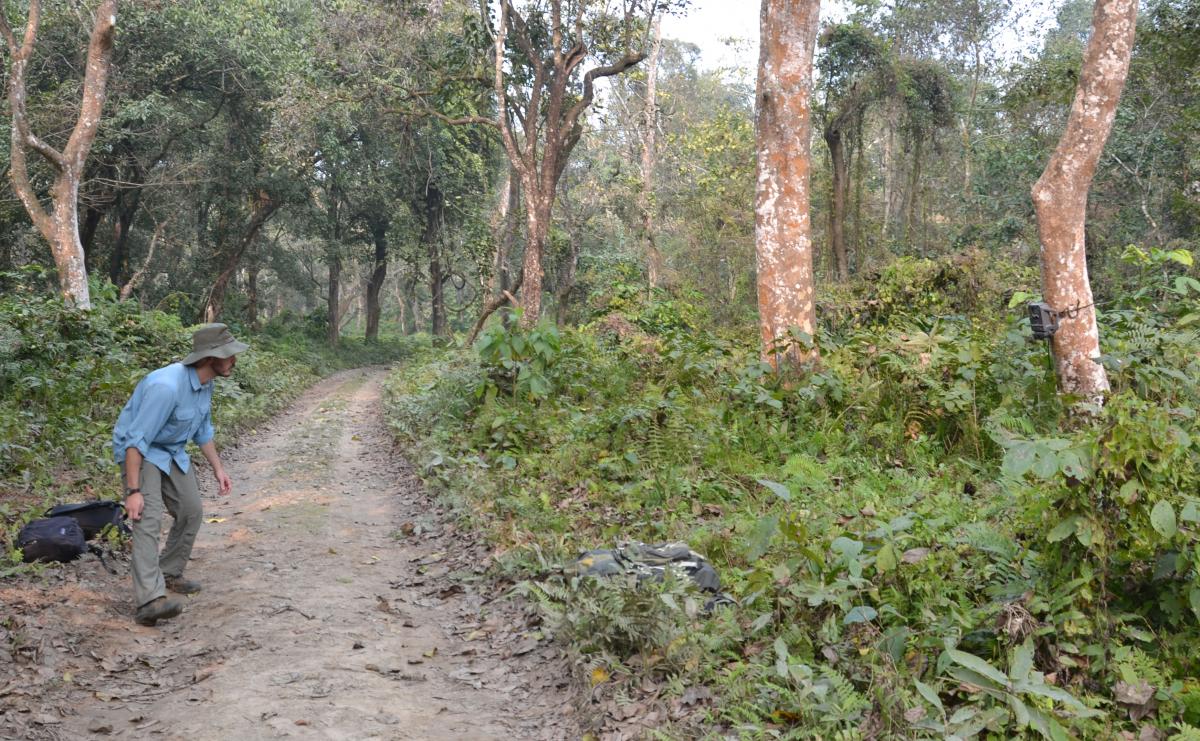 Carter and his colleagues placed infrared motion-activated cameras at 76 locations spanning areas inside the park and the buffer zone. While GPS collars can tell a lot about an individual animal’s behavior, camera traps give a fuller picture of traffic in an area. When combined with information about the condition of forests and grasslands, it allowed Carter to see where tigers were hanging out, and insight into why.

It turns out that over a 20-year span, Chitwan National Park still is a desirable place for tigers. But it is the buffer’s tiger habitat that has gradually improved while the park’s habitat has gradually degraded. That’s information conservation managers can use to fine tune policy as they work to balance their efforts to protect biodiversity with ways to also allow the people that depend on the forest for survival to thrive.

It echoes a trail blazed by Liu in 2001. Then he published a paper in Science magazine showing that panda habitat was being destroyed quicker inside the world's most high-profile protected nature reserve than in adjacent areas of China that are not protected, enabling the Chinese to realign their policies. The paper also was the beginning of a powerful research focus that pulls from several disciplines to fully understand the outcomes of conservation policies from the perspective of coupled human and natural systems.

The methods Carter and his colleagues have created are ones that could be powerful tools for conservation managers across the globe.

“This is a pretty easy way to take advantage of tools and methods being used all over the world – camera traps and satellite images-- to measure how habitat has changed and to visualize how that has changed across space and time,” Carter said. “It’s a simple way to assess how different policies and practices affect habitat and figure out which ones are working and which ones aren’t to promote effective policy now and in the future.”

Carter is now a research associate at the National Socio-Environmental Synthesis Center in Annapolis, Md, and Princeton University in New Jersey. In addition to Carter and Liu, who is CSIS director, "Assessing spatiotemporal changes in tiger habitat across different land management regimes" also was written by Bhim Gurung of the Nepal Tiger Trust in Chitwan; Andrés Viña, an assistant professor in CSIS; Henry Campa, professor of wildlife ecology; and Jhamak Karki of Nepal’s Department of National Parks and Wildlife Conservation.

The research was funded by the National Science Foundation, the U.S. Fish and Wildlife Service Rhinoceros and Tiger Conservation Fund, NASA’s Earth and Space Science program and MSU AgBioResearch.

Science via comic = so cool