In 1914 the Smith-Lever Act was signed into federal law by President Woodrow Wilson. That created a national Extension system.

In these web-based articles we do not normally toot our own horn. But this year, Michigan State University Extension has a 100th birthday. On July 2, 1862, President Abraham Lincoln signed the Morrill Act into law, creating a national network of colleges and universities that were meant to serve the higher education needs of farmers and laborers across the nation.

Then 100 years ago May 8, 1914 President Woodrow Wilson signed legislation that extended the land-grant university concept beyond university campuses to reach into communities across the United States. That legislation created the Cooperative Extension System (CES) as a partnership between the federal, state and county governments. That legislation continues today as the key authorization legislation for the work of MSU Extension.

The Smith-Lever Act of 1914, carries the names of its two primary sponsors, Senator Hoke Smith of Georgia and Representative A.F. Lever of South Carolina. The act's stated purpose was

“. . . to aid in diffusing among the people of the United States useful and practical information on subjects relating to agriculture, [uses of solar energy with respect to agriculture,] home economics, and rural energy, and to encourage the application of the same, there may be continued or inaugurated in connection with the college or colleges in each State, Territory, or possession . . .” (Brackets added to reflect later amendment to the act.)

For 1862 and 1914, this radical investment by the Morrill and Smith-Lever Acts was also meant to foster economic development by stimulating the transfer of knowledge from research into practice on farms, in factories, and in families (agriculture, 4-H and youth, family, food & health, business, community, lawn & garden, natural resources, coastal issues and many other related subjects). The uniquely American aspect of the Morrill Act was the direct investment of resources into the creation of these institutions by grants from the U.S. government. And those grants came in the form of publicly owned land that was turned over to the state government, which in turn could use that land grant to house the university, to sell for capital to use in building the university or both. From that unique concept came the common name for this act and the institutions it helped to support: the Land Grant Act and land-grant colleges and universities. Michigan State University is Michigan’s land grant university, and with the May 8, 1914 Smith-Lever Act, why Extension in Michigan is part of MSU, and why this service is provided to you. (There are two other land grant institutions in Michigan as a result of a 1994 amendment to the Smith-Lever Act: Saginaw-Chippewa tribal College and Bay Mills Community College.) MSU Extension administration and supporting services are now housed in the Morrill Hall of Agriculture in the older, National Historic Register, part of the MSU campus. 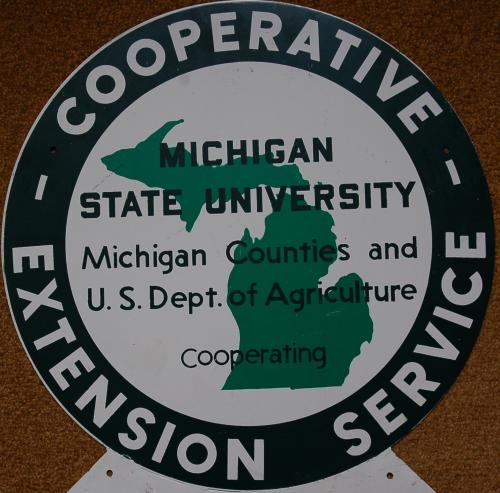 With the passage of the Smith-Lever Act, the first statewide home economics and 4-H youth Extension workers were appointed. County home economics agents were appointed beginning in 1915. In the early years of Extension, “demonstration agents” showed or demonstrated new farming or homemaking techniques. Today, Extension agents use a wide variety of information systems to deliver educational information.

The land grant and Extension idea worked, became popular, and now is copied in many other countries with India now supporting the largest Extension-like system in the world.

It is inspiring to be part of a vision that was created 100 years ago and that is still alive, transforming and improving to meet today’s needs. Join us at facebook for celebrating 100 years.