How should fruit growers respond to hail and severe storms?

Quick action by growers can reduce losses in fruit plantings damaged by storms.

Strong storms are not uncommon in Michigan. These storms often have high winds, heavy rains and in some cases hail. Severe storms, especially accompanied by hail, have the potential to promote and spread serious diseases in many fruit crops. There is a very short window for protecting plants after a hail storm. Freshly injured tissue is often very susceptible to disease, especially pathogens that need wounds to infect plants. Sprays to stop diseases need to be applied immediately after the storm. After a day or two, injured tissues have died and dried out and are no longer susceptible to infection.

There is a walling off as the injured tissue dies. A dry, corky layer forms, which is relatively impervious to infection. The initial period after the injury is when diseases become established on injured tissue and then spread to healthy tissue. Effectiveness of protectant sprays drops off rapidly as time passes after the injury. Close to harvest, damage to ripening fruit is the primary concern. Damage to the woody parts of the plant may be severe after hard hailstorms and in these cases, the focus is on preventing long-term damage to the woody stems.

My general recommendation is to apply a broad-spectrum systemic fungicide as quickly as possible after a damaging storm. If the shoots and leaves are damaged, measures to protect the plants themselves may be needed. Here are some specific recommendations by Michigan State University Extension for different fruits damaged by hail.

On cherry fruit, brown rot and wind whip are the main concern. Sweet cherries are always susceptible to brown rot, but they become more vulnerable close to harvest. Rain often cracks sweet cherry fruit, making them especially vulnerable to brown rot. In sweet cherries, sprays to reduce the spread of brown rot should be applied if the trees were not recently treated for this disease. Many growers will include sulfur products to dry out wounds in the fruit quickly.

Tart cherries are not as susceptible to brown rot, but become susceptible as the fruit colors, and controls would be helpful. Wind whip is damage to the skin of the cherry caused by abrasion during the storm. Nothing can be done with wind whip except trying to dry out the damage and limit disease infection to the damaged part of the fruit. 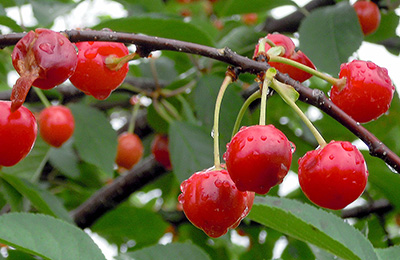 Damage to tart cherries before harvest. Photo was taken the morning after a storm. Note the torn skin on the fruit in the upper left. Bruises to red fruit are just noticeable as discolored spots on the fruit. Photo: Mark Longstroth, MSU Extension. 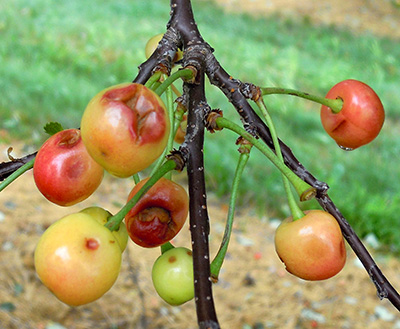 Later in the day, bruises and cuts are much easier to see. Note that tissues around cuts are sunken and brown and easily infected by brown rot, which can then spread throughout the orchard. Photo: Mark Longstroth, MSU Extension.

Apricots, peaches and plums that are close to harvest need to be protected from brown rot as well. Sulfur products are used on peaches and plums to dry out fruit wounds quickly. Do not use sulfur on apricots, which are sensitive to sulfur. Peaches may also need to be protected against bacterial spot. Antibiotics should be used against bacterial spot in peaches after the trees have leafed out and especially when damaged fruit is present.

Copper is often used to protect against bacterial diseases of tree fruit, such as bacterial canker in cherries, bacterial spot in peaches and plums and fire blight in apples and pears. Early-season hailstorms that damage the tree should be treated quickly with copper materials. During the growing season, only tart cherries should be treated with copper. Do not use copper on stone fruits other than tart cherries when there are leaves and fruit present.

In apple and pears, fire blight is a major concern. Orchards where there is a history of fire blight or fire blight symptoms should be sprayed to prevent the further spread of the disease after severe storms. The trauma from high winds, hard rain or hail creates openings in the plants that the fire blight bacteria can enter. Widespread severe storms can spread fire blight widely.

When there is significant fire blight in the area, highly susceptible varieties should be protected after a storm. The general recommendation is to use streptomycin, which is an effective material with back action of one to two days. Streptomycin resistance is documented in many parts of Michigan. Streptomycin should never be used where there is resistance as it will often make thing worse by removing all bacterial competition.

Other antibiotics are less useful. Kasumin is only used during bloom. Oxytetracycline is a protectant and not as useful after a trauma event. Some growers use copper or hydrogen peroxide to protect apple wounds after a hail event. After a hail storm, part or all of the crop is damaged and will be unsaleable as fresh fruit. Hail-damaged apples are often sold for juice. So, fungicides to control fruit rots are important. 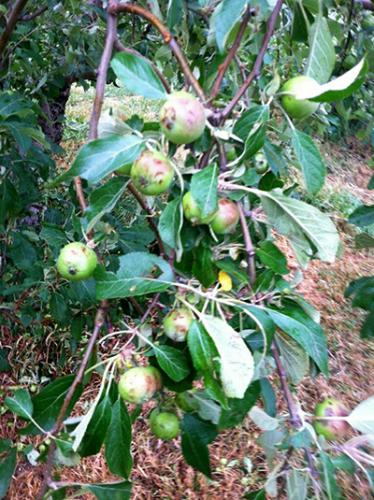 Severe damage to apple fruit leaves and stem from a hard hailstorm. All of these wounds are susceptible to fire blight infection and need to be protected immediately. Photo: Matt Miller.

In grapes, unless the vineyard was directly impacted by hail, no special measures should be needed. Where there was hail, a fungicide will reduce fruit rots and help damaged stem tissues heal. On varieties susceptible to Botrytis bunch rot, sprays to prevent this disease should be applied whenever the fruit is damaged. If the shoots and vines are damaged, crown gall may appear. There are no sprays to control crown gall, but growers should scout for it and remove it in the dormant season.

In blueberries, unless the field was damaged by hail, no special measures are needed. Where there is hail damage to the shoots and canes, fungicide sprays targeting Phomopsis canker and twig blight should be applied to prevent fresh wounds from infection.

In brambles, where there was hail, growers should spray to control cane diseases with a broad-spectrum systemic fungicide.