Invasive Phragmites australis: What is it and why is it a problem?

Invasive Phragmites australis is changing many Michigan wetlands—and not for the better.

Invasive non-native Phragmites australis is a perennial wetland plant that has quickly spread through Michigan marshes and wetland areas, robbing the fish, plants and wildlife of nutrients and space; blocking access to the water for swimming, fishing and other recreation endeavors; spoiling shoreline views; and posing a fire hazard. It can grow to be over 15 feet tall and crowds out other plants, creating monotypic dense stands of these invasive plants (often with over 20 stalks per square foot). It can spread through windblown seeds, soil transfer, animals or extensive over/under ground stems and rhizomes that will often re-sprout when broken. It is able to adjust its growing based on environmental conditions and can even survive stagnant, oxygen poor or salty conditions. 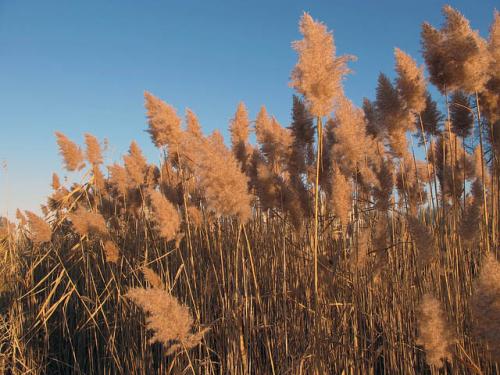 According to the Michigan Natural Features Inventory (MNFI), there are two subspecies of Phragmites australis present in Michigan. The native, subspecies americanus, and the invasive non-native introduced form, subspecies australis (sometimes referred to as haplotype M). The non-native subspecies was introduced to the east coast of the North America sometime between the late 1700s and the early 1800s, and has gradually expanded its range westward.

While it may appear that the plume-topped Phragmites australis is just another pretty face in Michigan’s wetland landscape, this member of the grass family can be bad news for our local marshes. MNFI says that early recognition is critical because the plant stores energy underground in its extensive network of rhizomes; the older it is, the harder it is to control. Recognizing the non-native form of Phragmites early in its invasion increases the opportunity for successful eradication dramatically. Once it has become established, removal by hand is nearly impossible.

According to the Midwest Invasive Plant Network, invasive plants can affect your ability to enjoy natural areas, parks, and campgrounds. Hikers, cyclists, and horseback riders all enjoy well-maintained trails, and invasive plants can grow over trails to the point that the path cannot be followed or can be difficult to navigate. Invasive plants can also increase the risk of flooding and soil erosion leading to cloudy water, lower water quality, and silted spawning beds. Invasive species can also turn an enjoyable stroll through the fields, woods, or wetlands while hunting into an uncomfortable trip through dense tangles of invasive species that are difficult or nearly impossible to push through and limit hunting opportunities. These ecotourism activities, support local economies across the Great Lakes basin, providing jobs for local citizens and tax base to support important government services on which many people rely. The presence of Phragmites, therefore, cannot only impact the quality of our environment but also the quality of our life style, which in these cases are inextricably linked.

The Michigan Department of Environmental Quality recommends controlling the invasive Phragmites by using an integrated pest management approach which includes an initial herbicide treatment followed by mechanical removal (e.g., cutting, mowing) and annual maintenance. For large areas with dense stands of invasive Phragmites, prescribed burning used after herbicide treatment can provide additional control and ecological benefits over mechanical removal. Where possible, flooding for extensive periods during the growing season can also be an effective method of control.