Keep your eyes open for the viburnum leaf beetles

The invasive viburnum leaf beetle is actively feeding now on viburnums in natural and landscape settings.

The viburnum leaf beetle, a European native, has been found in many locations in Southern and Central Michigan, although Michigan infestations are still localized and uncommon. According to Michigan State University Extension, if you have viburnum, the chances are very good that you will find viburnum leaf beetles on them sometime in the next five years. Some lucky people have already had shrubs defoliated by the beetles. Both the immature and adult stages are serious defoliators of many viburnums.

The greenish yellow larvae are now gregariously feeding on the underside of tender, newly expanding viburnum leaves, skeletonizing the foliage. Damage usually starts on lower leaves with only the midribs and major veins left intact.

As the larvae mature, they grow to about one-third of an inch long, darken and develop a series of dark spots. These larger larvae are more likely to be found feeding on the tops of leaves. Adults will start feeding on the leaves in July and are active until frost. 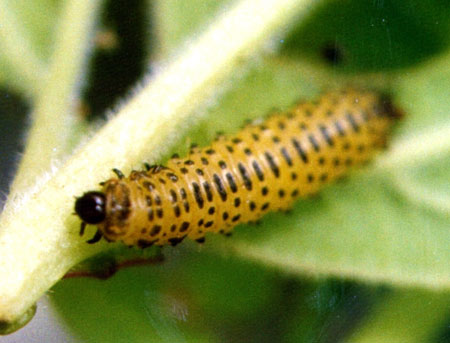 What do viburnum leaf beetles feed on?

This leaf beetle is restricted to feeding on viburnum species with a preference for some species and cultivars over others. Cornell University entomologists are developing a host preference list.

Preferred hosts most susceptible to infestations:

Viburnum leaf beetles feed in both adult and larval states. Infested plants do not have time to re-vegetate between these two stages. Two or three consecutive years of defoliation can cause significant dieback and eventually kill plants.

Remove egg-infested twigs. This is probably the single most effective action you can take against viburnum leaf beetles. Search for infested twigs between early October and mid-April and prune them out. Read more information and pictures of egglaying sites.

Pesticide options. When necessary, a number of pesticides are effective in controlling viburnum leaf beetles. Products containing carbaryl (Sevin) as the active ingredient or one of the pyrethroid insecticides (cyfluthrin, permethrin, resmethrin) are highly effective as foliar sprays. Honey bees and other pollinators can be protected by waiting until the petals fall before spraying, or by removing the flowers before spraying. Soil-applied systemic products that contain imidacloprid are also effective, but should also be applied after the flowers are gone to protect bees.

Also, we have a research project underway to see if a basal soil drench of imidacloprid applied after the flowers are gone will harm bees in the following year. Only spray infested viburnum plants and try to avoid drift onto other plants to preserve beneficial insects in the yard and garden.