Nearly twenty species of fish, including Lake Sturgeon, are utilizing three constructed fish spawning reefs in the waterways in the Detroit and St. Clair Rivers.

Many fish seek out rocky areas in fast-flowing currents in order to deposit their eggs during spawning season. Unfortunately, many of the natural limestone reefs and rocky areas in the Detroit and St. Clair Rivers were destroyed to construct shipping channels in the late 1800’s through early 1900’s. Similar spawning areas in nearby rivers were also made inaccessible as dams were built in many of the tributaries. Scientists often cite this lack of suitable spawning habitat as a limiting factor in Lake Sturgeon and other fish populations.

The American Fisheries Society lists Lake Sturgeon as a species of special concern by the U.S. Fish and Wildlife Service, and a threatened species in North America. It is considered a globally rare species by The Nature Conservancy, a species of special concern under the Canadian Species at Risk Act, and a threatened species in the State of Michigan.

Since 2003, Michigan Sea Grant and a team of public-private partners have planned and constructed a series of fish spawning reefs in an effort to increase populations of Lake Sturgeon and other native fishes. With each reef construction and subsequent monitoring, the team has learned and refined their projects to meet, better, the needs of native fishes.

The first reefs off the northern tip of Belle Isle have not seen any Lake Sturgeon spawning. However, more than a dozen other species regularly spawn on the reefs including the Northern Madtom and Lake Whitefish. The Northern Madtom is a small species of catfish that is a globally rare, critically imperiled fish that is listed as endangered in Michigan and endangered (unregulated) in Ontario, and Canada. Lake Whitefish were once abundant in the Detroit River, but after overfishing and widespread pollution, they had not been documented in the river for 70 years.

In 2008, spawning reefs were constructed off the north end of Fighting Island in the Detroit River. This was the first known fish habitat restoration project to use both Canadian and U.S. 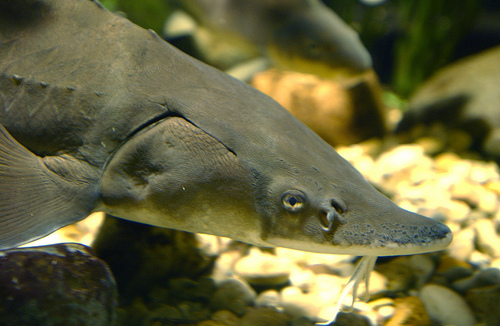 funding sources. This was also the first constructed reef where scientists were able to document Lake Sturgeon spawning. Shortly after construction, scientists monitoring the reef collected eggs and determined that they were deposited, in fact, by Lake Sturgeon. Since then, Lake Sturgeon and many other native fishes have consistently spawned on the reefs.

In 2010, Michigan Sea Grant and partners secured a Great Lakes Restoration Initiative grant from the NOAA Great Lakes Habitat Restoration Program for a third project to create fish spawning habitat in the Middle Channel of the St. Clair River. Construction of a series of nine spawning reefs took place from May through June 2012. A visit to the first six reefs by researchers equipped with underwater cameras in May 2012 (during construction) showed adult Lake Sturgeon already spawning on the reefs!

Recently, Michigan Sea Grant was awarded $799,226 to oversee the construction of an additional fish spawning reef in the Detroit River. The funding is through the Great Lakes Restoration Initiative, administered by the National Fish and Wildlife Foundation’s Sustain Our Great Lakes Grant Program. Matching funds bring the total dollar amount of the award close to $1.6 million. The project will increase habitat for fish at all life stages, but especially spawning, for a variety of important sport and commercial species including Lake Sturgeon, Lake Whitefish, Walleye and Perch.

The reef is slated to be installed in the Detroit River near historic Fort Wayne to increase habitat for native fish. The Detroit River is classified as an international Area of Concern, due to contamination and the presence of Beneficial Use Impairments (BUI), including loss of fish and wildlife habitat. As a result, the Huron Erie Corridor (HEC) steering committee, consisting of more than 27 organizations that manage and protect the ecologically and economically valuable river, has placed increased emphasis on the construction of artificial spawning reefs. Fish habitat restorations helps rebuild the Michigan fishery, which in turn helps boost the economy.

“Michigan Sea Grant has a proven track record of creating successful spawning habitats. This grant will further expand their work on the Detroit River and revitalize our indispensable local eco-systems,” Rep. Hansen Clarke (D-13th District) said in a press release supporting the project.

This reef project will build upon previous and ongoing restoration efforts lead by Michigan Sea Grant and partner organizations. Data collected from other successful reef projects in the Detroit and St. Clair rivers will be applied to this project in order to maximize the benefit to fish species.

For more information about this restoration project, contact Mary Bohling at 313-410-9431.