Several soft scales such as spruce bud, pine tortoise and striped pine scale can damage conifers. Soft scale refers to a family (Coccidae) of scale insects that secrete an attached, thin, waxy layer over themselves. This covering cannot be separated from the scale's body. When feeding on the shoots or branches, they excrete a sugary substance called “honeydew.” Sooty mold can grow on this honeydew, causing trees to appear black. If you have pine or spruce trees with moderate or high populations of scale in the past, Michigan State University Extension recommends to start scouting now.

Spruce bud scale (Physokermes piceae) is usually found on Norway spruce, but it will attack other spruces. Spruce bud scale may often go unnoticed since their size, shape and color can cause them to be mistaken for buds. They are round, reddish-brown and often clustered in groups of three to eight at the base of new shoots. Often, populations become noticeable because trees become coated with “glistening” honeydew. Spruce bud scale is typically found on lower branches more often than higher branches.

On trees already weak or stressed, severe infestations may cause lower branches to die. There is only one generation per growing season. Young females overwinter on the underside of needles. In the spring, females move onto twigs to complete their development. Usually, eggs hatch and tiny crawlers move around twigs and branches in June or early July (700-1,150 growing degree days, or GDD, base 5). 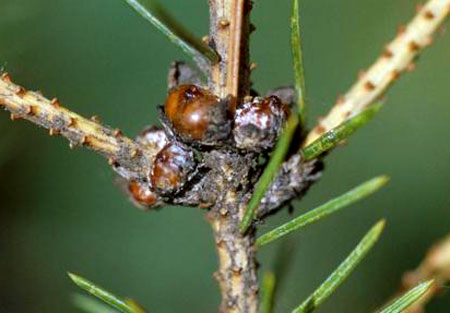 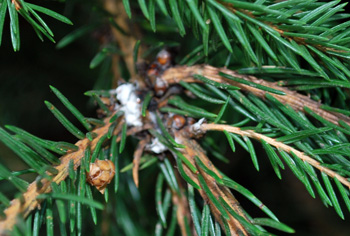 We suspect you will find both active in many Scots pine fields that are heavily infested. What does this mean? Probably nothing to a grower since the biology and control of the two species are quite similar with a single generation each year. Pine tortoise scale eggs usually begin to hatch around 400-500 GDD50 and stripe pine scale at 750-800 GDD50.

Both of these scales that feed on the woody part of pine shoots and small branches excrete amazing amounts of sugary honeydew. The crawlers are pinkish-red and can easily be seen moving about on shoots and needles. What has made it difficult for growers to try and control these scales is that the eggs hatch over a relatively long period of time, continuing through 1,000-1,200 GDD50 (end of egg hatch and the last of the crawlers). Also, coverage is usually an issue. Often, we find populations in the “shadow” areas where the pesticide doesn’t reach or penetrate the foliage. 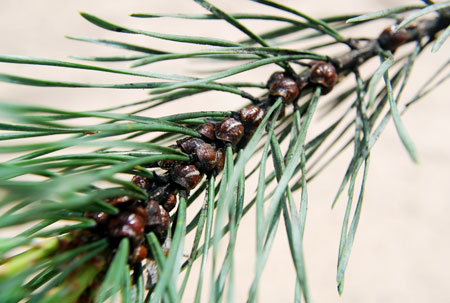 Horticultural oil might be something to consider, especially if you can apply the oil after crawlers settle and begin to feed. The oil will suffocate and kill crawlers. If you choose to use a conventional insecticide, choose a product with some systemic activity or a longer residual. Whether you use horticultural oil or a conventional insecticide, be sure to get good coverage!

While you are scouting, keep an eye out for white, fuzzy insects that look like little mealy bugs. These little, white insects are actually larvae of a lady beetle in the genus Hyperaspis. This species of ladybird beetles specializes on pine tortoise scale. The adults and larval ladybugs will eat the scale eggs and crawlers. At this time of the year, lady beetle larvae will be very small. They may even crawl up and hide under female scales on needles. Once eggs are laid, the Hyperaspis larvae will feed aggressively on eggs and then on crawlers. They will get larger over the next few weeks and you will probably see them on infested shoots and branches. These lady beetles can be pretty amazing. We have seen a number of fields where this lady beetle controlled even heavy tortoise scale infestations in a single summer.