Michigan ranks as a leader for acreage in chestnut production. Liven up your meal this holiday season with chestnuts.

If you ask the average person today to identify a chestnut tree, most would be lost to describe one. One of the reasons the average person wouldn’t recognize this once majestic and versatile American native is that it all but disappeared from the landscape in the early 20th century, according to Michigan State University Extension specialist Dennis Fulbright. 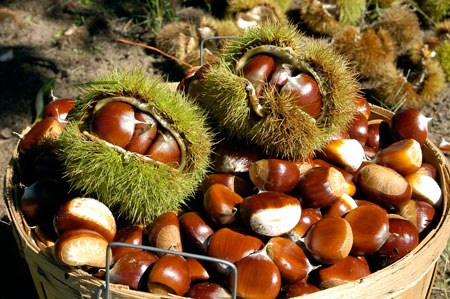 Chestnuts have to be removed from their thorny husk and seed
coat before eating. Photo credit: Dennis Fulbright, MSU

A devastating Asian fungal disease entered our country known now to us as “chestnut blight,” which created cankers in mature trees effectively cutting off the vascular system. Chestnut trees, which could be found abundantly in eastern and Appalachian forests and, to a lesser extent, here in Michigan, may have grown to 12 feet in girth. The beautiful, decay-resistant wood was used for building homes, barns and furniture and the stump had the potential to sprout back once cut, effectively reforesting hillsides that had been timbered.

The fruit of the chestnut tree was an abundant source of food for wildlife and domestic animals. Early European settlers also ate them, but they craved the larger chestnuts of their homeland. According to Fulbright, when Mel Torme wrote the “The Christmas Song,” – “Chestnuts roasting over an open fire…Jack Frost nipping at your nose” – he was not remembering the American chestnut, but rather it’s much larger cousin, the Italian chestnut. Street vendors would set up roasters on every corner in cities such as New York, Chicago and Philadelphia and toast the tantalizingly sweet fruits until they tasted like candy.

Chestnuts are known to be a “fancy food,” Fulbright said, but they can be exotic tasting all by themselves. Fulbright says that for those who haven’t tried chestnuts, the biggest surprise is the sweetness. I would agree. What honey does for ham, chestnuts do for food. I really can’t think of a nut that has a more unique flavor. (Dozens of recipes can be found at Chestnut Growers, Inc., from starts to soups to main courses and desserts.) 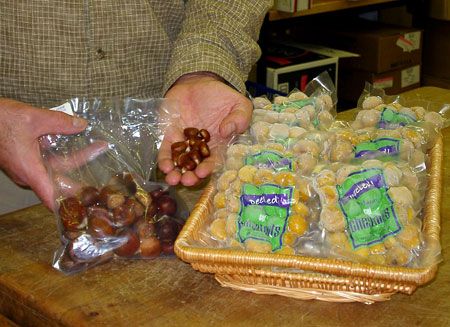 Michigan-produced chestnuts have become the first choice of Italian grocery stores and are being sold all over the world, used for gourmet foods and even breweries. Fulbright says, “One of my favorite products is chestnut hummus. Can't stop eating that one!” This product is really in its infancy for how it can be used, or as Fulbright says, “a food that is waiting to be explored.”

When asked why a whole generation doesn’t know about these wonderful nuts, Fulbright responded, “If you don’t have ties to the city or perhaps an aunt or relative who used chestnuts in cooking, you probably don’t know about them. Besides that, roasting chestnuts is very labor-intensive.” When on the tree, the fruit is covered with a spiny bur that is likened to a cactus. The sweet, yellow nut meats are encased in a flexible shell called a pellicle. Once out of the bur, the nuts are an attractive, shiny brown. The pellicle should be slit open before roasting to allow the person to remove the nut meat inside once it is cooked, but has to be done while the nut is still hot or it will re-adhere to the pellicle. Hmm…doesn’t sound too good to me.

Thanks to much research and an active tree planting effort, Michigan is annually producing well over 10 tons of the sweet nuts. According to Fulbright, Michigan-grown chestnuts are being received with open arms around America. In an objective sensory panel test performed by Kansas State University and University of Missouri researchers, Michigan-grown chestnuts beat out the same cultivars from California and Missouri for sweetness and they even beat Chinese chestnuts that were tested.

One of the reasons for their success is that the Michigan nuts are already peeled. The product is raw and vacuum sealed, then frozen. No flavor is lost through canning and the nuts are as moist as they were when harvested. Compared to other nuts, the chestnut is low in fat and high in fiber and protein. For instance, a walnut may be 40-50 percent fat while the chestnut is only 2 percent.

For more information on a wide variety of garden topics, go to www.migarden.msu.edu or contact MSU’s toll-free garden hotline at 1-888-678-3464 with any of your questions.

What’s the difference between horse chestnuts and sweet chestnuts?

Heroes to Hives: A new program to support veterans in beekeeping