Trap catches are sharply up in southwest, southeast, Fruit Ridge and west central Michigan. Ripe and ripening fruit in susceptible crops should be protected.

The number of SWD flies caught in traps over the past week across southern Michigan, including the Fruit Ridge and west central regions, are sharply up in traps checked by MSU staff and private consultants. This is an unusually early increase in SWD activity. As mentioned last week, some traps are catching mostly female SWD, so be aware that scouts looking only for males will be missing some important information. See our Spotted Wing Drosophila Identification Guide.

We are also starting to find more SWD larvae in salt tests of some fruit this week, especially in wild honeysuckle and from fruit at some abandoned sites. Most of these SWD larvae are the tiny first instars, but some have more mature (larger) larvae. Commercial farms using an effective spray program for this pest generally have it under control, with either zero or very low infestation.

Locations with a lot of woods nearby and especially those with honeysuckle and other wild plants ripening in the nearby woods are providing very high SWD pressure this season, so management programs should be enhanced in these locations.

Counties included in the 2017 trapping network are Allegan, Antrim, Benzie, Berrien, Grand Traverse, Ingham, Ionia, Kent, Leelanau, Lenawee, Livingston, Macomb, Manistee, Mason, Monroe, Montcalm, Muskegon, Oceana, Ottawa and Van Buren. All traps in the network are baited with commercially available lures and placed in susceptible crop fields or orchards, or in a location adjacent to susceptible crops. The majority of the traps this season are standard deli cup style traps baited with the commercial Scentry brand lure. Most of the traps are placed in areas where SWD infestation has been recorded in the past. 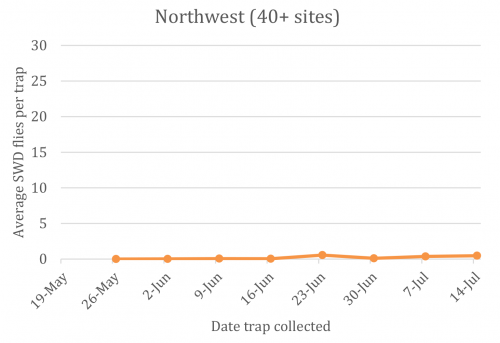 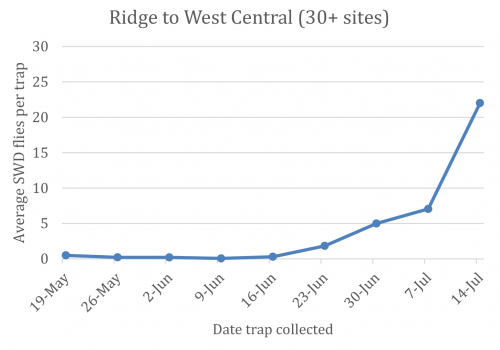 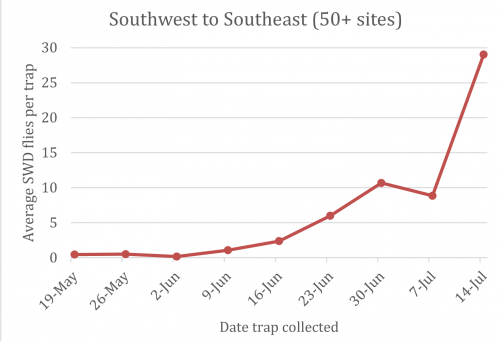