This is the second weekly report of the Michigan State University Extension spotted wing Drosophila (SWD) statewide monitoring effort for 2014. Our network of traps across more than 80 sites was checked during the week of June 22 and has revealed continued activity of this pest in Michigan. The catches are generally lower this past week, but with a detection in a new location. There was a total of one male and two females trapped, one fly in each of three southwest Michigan counties: Berrien, Ottawa and Kent. This is the first detection of SWD activity in Kent County at a raspberry farm. 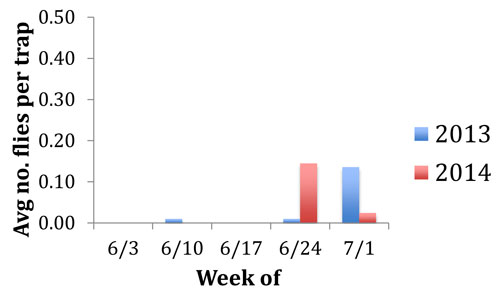 The number of flies caught in each trap was generally zero or one SWD. This indicates that SWD is slowly becoming active and growers should be on alert for this pest as their susceptible fruit crops start or continue to ripen. SWD can only infest berries when they are ripening or ripe, so currently the focus of SWD monitoring and management efforts should be on ripening strawberries and early summer raspberries. Blueberry fields that are just starting to be ripe should also be carefully monitored and managed if they have SWD captures and ripe fruit.

In addition to the use of monitoring traps to detect the adult flies, a simple salt solution of 1 cup of salt per gallon of water can be used to assess fruit for larval infestation. As blueberries, cherries, and other susceptible crops ripen, growers will need to make management decisions based on fly activity and crop ripeness stage.