More spotted wing Drosophila have been caught in monitoring traps, with higher catches at minimally-managed sites in southwest Michigan. Monitor for this pest when crops become susceptible.

Earlier than usual activity of SWD continues this season. This likely reflects our mild winter and the high population last fall, combined with our spring conditions that provided an early start to the fly activity.

In the past week, about 20 percent of all the traps are catching adult SWD flies, with an average of just over one SWD fly per trap. So far there have been only seven SWD flies trapped in the many traps across the northwest region, but there is much greater activity building in the southwest region.

In some of the minimally-managed sites we scout in southwest Michigan, where the fields are mowed and pruned but don’t receive pest control programs for SWD, we have detected much higher catches and a greater proportion of traps are catching SWD.

Two southwest Michigan sites that receive minimal or no insecticide applications had over 25 SWD in the trap and a majority of these were female SWD. The current pattern of population development is similar to what we typically observe in late July and August, again highlighting how early this season seems to be for SWD.

Indications are that SWD pressure will be strong in 2017. Growers of susceptible fruit should be prepared to manage this insect through their harvest season. 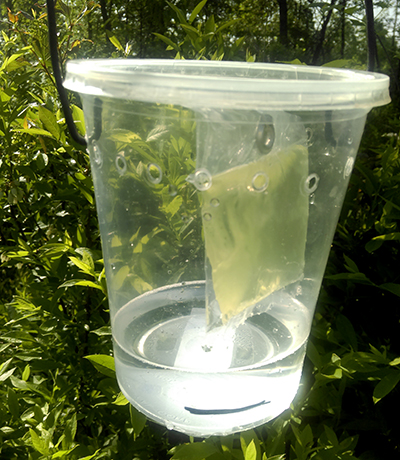 Example of a trap used to attract and capture spotted wing drosophila adults. A commercially available pouch-style lure is suspended over a soap, borax and water drowning solution. Photo by Rufus Isaacs, MSU.

Growers of June bearing strawberries, early ripening blueberries and sweet cherries should be monitoring for this pest in traps and in their fruit.

All traps in the network are baited with commercially available lures and placed in susceptible crop fields or orchards, or in a location adjacent to susceptible crops. The majority of the traps this season are standard deli cup style traps baited with the commercial Scentry brand lure. Most of the traps are placed in areas where SWD infestation has been recorded in the past.