National Invasive Species Week 2017 is Feb. 27 to March 3. Invasive species are plants, animals, and other organisms that are not traditionally found in a given location (in this case the Great Lakes) AND are having a negative impact of some kind, whether ecological, economic, social, and/or a public health threat.

To help bring awareness to these threats, Michigan State University Extension and Michigan Sea Grant are featuring articles on invasive species that have invaded or have the potential to invade Michigan’s environment. This article features the invasive New Zealand mudsnail.

Description: According to the Midwest Invasive Species Information Network this aquatic invasive mollusk is very small with an average of 1/8 of an inch long with 7-8 whorls with a right-handed coiling and deep grooves. The shell color varies from gray and dark brown to light brown.

Similar species: The New Zealand mudsnail is difficult to distinguish from native snails, but the shell is more elongate.

Origin: As the name indicates, this invasive species is native to New Zealand.

How long it has been here: New Zealand mudsnails were first discovered in 1987 in the Snake River in Idaho. By 1991 it was in Lake Ontario and 2005 in Lake Erie.

Extent of range: There are two genetic types of New Zealand mudsnails: Clone 1 (found in Idaho in the 1980s and more recently in a Wisconsin stream) and Clone 2 (found in the three Great Lakes; Erie, Michigan and Superior). First spotted in the western United States, New Zealand mudsnails have now been found in several locations in the Great Lakes. (See USGS map below.)

Why it is a problem: When found in large numbers, New Zealand mudsnails can clog water intake pipes at facilities drawing from infested waters. They may also compete for food and space occupied by native snails and there is some evidence in their native range that trout may avoid these snails as a prey.

How it is spread: New Zealand mudsnails spread to uninfested areas by hitchhiking on watercraft and equipment, as well as on animals such as birds, horses, and in the guts of fish.

A cool/unusual fact: Females are self-reproducing, with a single female capable of reproducing 40 million mudsnails in a single year. Each new snail is a clone of its mother and females are born with developing embryos already in their reproductive systems.

Management actions/options: According to the Michigan Department of Natural Resources, because the New Zealand mudsnail has been highly successful in its dispersal, a combination of management strategies including preventive measures and physical, biological, and chemical methods should be implemented to prevent further range expansions. A more detailed description of management options is available through their report.

What you can do to help prevent the spread: You can prevent the spread of New Zealand mudsnails by 1) educating others about identifying and preventing their spread and 2) practicing the Clean, Drain and Dry method for watercraft prior to moving them between lakes. (See video.) and 3) removing mudsnails from boots, waders, and other equipment. (See video.) 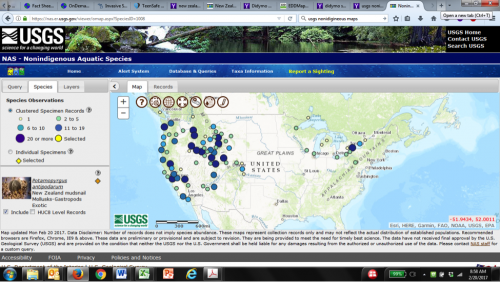