Part 7 in a series to learn about invasive species and what to do to help protect Michigan and the Great Lakes.

To help bring attention to this week, Michigan State University Extension (MSUE) and Michigan Sea Grant are featuring two different invasive species (one aquatic and one terrestrial species) that have invaded or have the potential to invade Michigan’s environment. Today’s featured aquatic invasive species is the quagga mussel.

Description: According to the U.S. Geological Survey this invasive mussel species is a small freshwater bivalve mollusk that exhibits many different morphs and can grow to up to 4cm. There are several diagnostic features that aid in identification of quagga mussels. They have a rounded angle between the ventral and dorsal surfaces and a convex ventral side with a small byssal groove on the ventral side near the hinge. Color patterns vary widely with black, cream, or white bands and usually have dark concentric rings on the shell and are paler in color near the hinge. If quaggas are viewed from the front or from the ventral side, the valves are clearly asymmetrical.

Origin: The quagga mussel is native to the Dneiper River drainage of Ukraine and Ponto-Caspian Sea as well as the Black, Caspian, and Azov seas (and their tributaries) in Eastern Europe and the Middle East.

How long it has been here: The quagga mussel was first sighted in the Great Lakes in September 1989, when one was found near Port Colborne, Lake Erie, though the recognition of the quagga type as a distinct species was not until 1991. The first sighting of quagga mussels outside the Great Lakes basin was made in the Mississippi River between St. Louis, Missouri and Alton, Illinois in 1995.

Extent of range: Quagga mussel populations are well established in the southern Great Lakes and have now spread in pockets into the Mississippi River and as far west as California.

Why it is a problem: The quagga mussel is a pest that rapidly colonizes waters they inhabit, adhering to hard surfaces or clustering in sandy or mucky areas. They clog water pipes and intakes and pose substantial maintenance hurdles. They also compete with native mollusks for food as they are efficient filter feeders. Quagga mussels may also increase the presence of algal blooms. 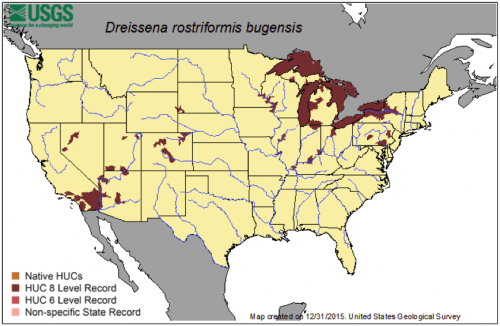 How it is spread: Quagga mussels spread primarily through recreational and commercial boating. Adults can attach themselves to boat hulls and trailers and then be transferred to new waterbodies when boats are moved. Larvae can also be captured in bait buckets or sucked into live wells and transported to new areas.

A cool/unusual fact: Quagga mussels can survive outside of water for 3-5 days.

Management actions/options: Once an invasive species becomes as widespread and abundant as the quagga mussels have become in the Great Lakes, no possibility of complete eradication exists. Chlorine and copper sulfate can be used in certain situations to clear quagga mussels from intake pipes, power plants and other industrial facilities. When possible, extended water drawdowns can be used to dry out quagga mussels.