This invasive can be a host for parasites and diseases and can carry crayfish fungus plague.

To help bring awareness to these threats, Michigan State University Extension and Michigan Sea Grant are featuring articles on invasive species that have invaded or have the potential to invade Michigan’s environment. This article features the invasive red swamp crayfish.

Description: According to the Midwest Invasive Species Information Network (MISIN) this invasive crustacean can be up to 5 inches long including claws. They have a dark red body, claws with spiky, bright red bumps and a black wedge-shaped stripe on their underside.

Origin: The red swamp crayfish is native to the Mississippi River drainage and the Gulf Coast.

How it came to the Great Lakes: Red swamp crayfish probably came to the Great Lakes by anglers who purchased live crayfish intended for food and used it as bait or through the aquaculture industry. The Lake Erie introduction may have been intentionally released in an effort to establish populations that could then be harvested for consumption.

How long it has been here: They’ve been found in the Great Lakes as early as 1967 in the Sandusky Bay area of Lake Erie. Although no live red swamp crayfish have been found in Michigan, carcasses were found in 2015 at a popular fishing site on Lake Macatawa.

Extent of range: In addition to its native range in the southern U.S., invasive populations of red swamp crayfish are now found scattered across over two dozen states.

Why it is a problem: According to MISIN, red swamp crayfish can be a host for parasites and diseases and can carry crayfish fungus plague. Once they become established, they can negatively impact an ecosystem due to its diverse diet, including plants, insects, snails, fish and amphibians. It also aggressively competes for food and habitat with native crayfish and other species.

How it is spread: Red swamp crayfish can be spread through a number of different ways including released fishing bait, transported in recreational watercraft, and classroom releases.

A cool/unusual fact: Red swamp crayfish are so hardy that they can survive in some wastewater treatment facilities after being flushed down the toilet.

What you can do to help prevent the spread: You can prevent the spread of red swamp crayfish by 1) helping to educate others about identifying and preventing their spread, 2) practicing the Clean, Drain and Dry method for watercraft prior to moving them between lakes. (See video) and 3) disposing of unwanted fishing bait and aquarium animals in the trash. 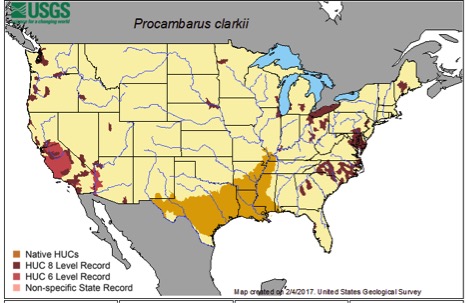