Part 5 in a series to learn about invasive species and what to do to help protect Michigan and the Great Lakes.

To help bring awareness to this week, Michigan State University Extension (MSUE) and Michigan Sea Grant are featuring invasive species that have invaded or have the potential to invade Michigan’s environment. Today’s featured aquatic invasive species is the round goby.

Description: According to the Midwest Invasive Species Information Network this invasive fish species is tan-gray with small dark blotches on its sides. The body is robust and tapered with a thick caudal peduncle. Round gobies also have a large blunt head with a subterminal mouth and partially protruding eyes and a small dark spot at the base of the upper pectoral rays. They are bottom-dwelling fish that can reach up to 10 inches in length.

Similar species: The round goby is similar to the mottled sculpin (native to Michigan) and the tubenose goby (another non-native species).

Origin: The round goby is native to the Black, Caspian, and Azov seas (and their tributaries) in Eastern Europe and the Middle East.

How long it has been here: Round gobies were first discovered in the 1990s in the Michigan waters of the St. Clair River (a Great Lakes tributary).

Extent of range: Round gobies are found throughout the Great Lakes and into southern Illinois near Jacksonville and southern New York near Binghampton. 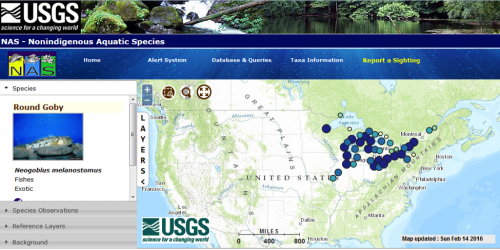 Why it is a problem: Round gobies are voracious eaters and thus competition for food is one of the main negative impacts on native species. However, the native sculpin also suffers from reproductive pressures as round gobies aggressively push the male sculpins off of the nests that they are attempting to guard from predators.

How it is spread: Round gobies spread to un-infested areas through commercial and recreational boating and discarded bait fish.

A cool/unusual fact: Although invasive, round gobies are now a staple food item of native bass species.