Part 6 in a series to learn about invasive species and what to do to help protect Michigan and the Great Lakes.

To help bring attention to this week, Michigan State University Extension (MSUE) and Michigan Sea Grant are featuring two different invasive species (one aquatic and one terrestrial species) that have invaded or have the potential to invade Michigan’s environment. Today’s featured aquatic invasive species is the spiny waterflea.

Description: According to the United States Geological Survey this invasive crustacean is a tiny freshwater species of zooplankton – small animals that rely on water flow and wind to move long distances. The spiny waterflea is distinguished by a single dark compound eye and a long straight tail spine that is twice as long as the rest of its body. The tail is straight or slightly angled with 1-3 barbs along its length. They sometimes have orange, blue or green coloration with a red stripe that runs half the length of the tail.

Similar species: The spiny waterflea is similar to the fishhook waterflea (another non-native species).

Origin: The spiny waterflea is native to Northern Europe and Asia.

How long it has been here: Spiny waterfleas were first detected in December 1984 in Lake Huron.

Extent of range: Since the first detection in 1984, spiny waterfleas have now been reported in all five Great Lakes and over 100 inland lakes.

Why it is a problem: Spiny waterfleas disrupt the native zooplankton community reducing food supplies for small fish and the young of sport fish such as bass, walleye and yellow perch. Small fish that prey on zooplankton may find the barbs of the spiny waterflea difficult to swallow and often spit it out, causing them to expend important energy resources without gaining nutritional value.

How it is spread: Spiny waterfleas are easily spread between waterbodies on angling equipment and bait buckets and in live wells and bilge waters. They can also spread naturally on water currents between hydrologically connected waterbodies.

A cool/unusual fact: Male and female spiny waterfleas can reproduce both sexually and asexually, often switching between methods depending on the availability of mates.

Management actions/options: As with many aquatic invasive species, once a reproducing population becomes established, management becomes difficult, lengthy, and expensive. Prevention through education, early detection and rapid response to newly forming populations is most effective. 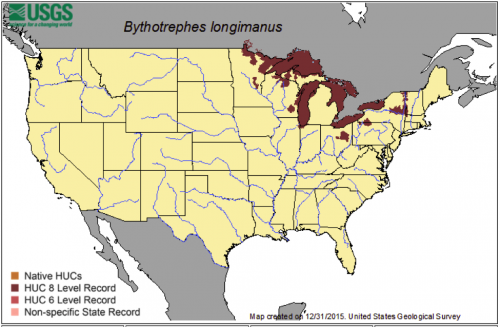