Part 3 in a series to learn about invasive species and what to do to help protect Michigan and the Great Lakes.

To help bring awareness to this week, Michigan State University Extension (MSUE) and Michigan Sea Grant are featuring different invasive species (one aquatic and one terrestrial species) that have invaded or have the potential to invade Michigan’s environment. Today’s featured aquatic invasive species is the water chestnut.

Description: According to the National Parks Service this aquatic invasive species has a rosette of floating leaves at the water’s surface; saw-tooth margins; triangular in shape and connect to an inflated petiole which provides added buoyancy for the leafy portion; additional, feather-like leaves can be found along the submerged stem. The stems can reach 12-15 ft. in length; very fine roots anchor the plant into the mud. Flowers are four-petaled and white; are insect-pollinated; fruit is a nut with four ½-inch, barbed spines. This video by Stony Brook-Millstone Watershed Association Education Director Jeff Hoagland shows how to identify water chestnut as well as what you can do to prevent its spread.

Similar species: The invasive water chestnut shares its name with a tuber from a different plant (Singhara chestnut) that can be found in cans in grocery stores and is popular in many Asian dishes.

Origin: The water chestnut is native to Europe, Asia and Africa.

How it came to the Great Lakes: Although water chestnut has not yet been reported in Michigan, populations have been reported in the Tonawanda Creek, a tributary to the Niagara River in New York. The Ontario Ministry of Natural Resources states that the introduction path was via a gardener at Cambridge Botanical Garden in Massachusetts.

How long it has been here: The National Parks Service says that the plant was first found in the United States near Concord, Massachusetts in 1859.

Extent of range: Water chestnut plants are found in the eastern United States from New Hampshire to Virginia and westward into Kentucky.

Why it is a problem: The National Parks Service says that water chestnut plants often form dense floating mats, severely limiting light. Once established, it can reduce oxygen levels, increasing the potential for fish kills. It competes with native vegetation and is of little value to waterfowl. Water chestnut infestations limit boating, fishing, swimming and other recreational activities. Further, its sharp fruits, if stepped on, can cause painful wounds.

How it is spread: The plant is spread via seeds and plant parts that are transported to unaffected areas.

A cool/unusual fact: Seed pods can remain viable for up to 12 years, although most will germinate within the first two years.

Management actions/options: Control of water chestnut can be difficult but most effective when detected early in the infestation period. Physical, chemical and biologic control methods have all been tried with various degrees of success. Physical control can entail either manual or mechanical removal but care must be taken to remove the entire plant to eliminate regeneration from plant fragments. Chemical control via herbicides can be effective although damage to native plants, fish and some animals can also occur. Biological control measures such as beetles, grass carp and fungus have been investigated all with limited success and risks to native species. 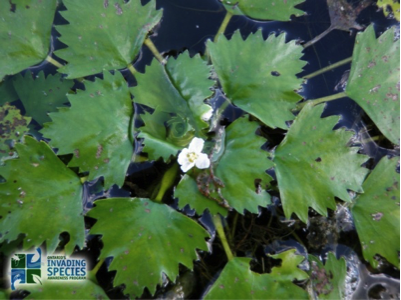 You can prevent the spread of water chestnuts by 1) not purchasing and using water chestnut plants in water gardens or aquariums and 2) practicing the Clean, Drain and Dry method for watercraft prior to moving them between lakes. View the video.

Report it: If you find this plant in Michigan, remove it if possible, do not put it back in the water and call the nearest DNR Operations Service Center.