Part 4 in a series to learn about invasive species and what to do to help protect Michigan and the Great Lakes.

To help bring awareness to this week, Michigan State University Extension (MSUE) and Michigan Sea Grant are featuring different invasive species that have invaded or have the potential to invade Michigan’s environment. Today’s featured aquatic invasive species is the yellow floating heart.

Description: According to the Midwest Invasive Species Information Network this invasive species is a rooted aquatic plant with floating leaves that typically grows in shallow waters less than 3.25 ft. The leaves are heart shaped to almost round. It has yellow flowers with 5 fringed petals that rise above the surface of the water.

Origin: The yellow floating heart is native to Eastern Asia and the Mediterranean.

How it came to the Great Lakes: Yellow floating heart likely arrived in the Great Lakes as an ornamental water garden plant, intentionally planted or released when no longer wanted. 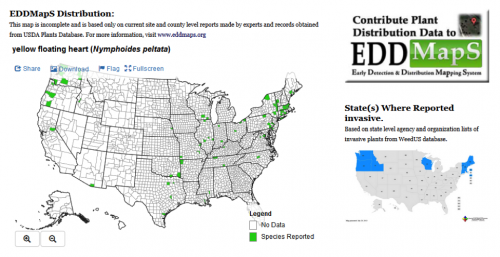 How long it has been here: According to the USGS, yellow floating heart was sold in the United States as ornamental pond plants as early as 1891.

Extent of range: Yellow floating heart plant reports are limited across the United States. In Michigan, it has only been found in one location on the campus of the University of Michigan-Dearborn in Wayne County. It was reported in 2015 although the plant is believed to have been present at the location for about 20 years. The infestation was subsequently eradicated through the removal of 1000 lbs of plants over a four-day period.

Why it is a problem: The plant can spread rapidly, forming dense mats on the water’s surface, displacing native species and limiting recreational activities such as fishing, boating and swimming. This plant threatens natural systems by changing community structure, excluding light availability to an ecosystem and reducing oxygen levels in the water.

How it is spread: Plants spread by runners, when floating seeds become established in new areas, through fragmentation or when dispersed by waterfowl.

A cool/unusual fact: Once the flower blooms it only lasts about one day.

Management actions/options: Control of yellow floating heart can be done through hand-pulling and mechanical removal.

What you can do to help prevent the spread: Although it is a popular water garden plant, this plant is listed on the Michigan prohibited aquatic plant list, making it illegal to possess, transport or release the plant within the state. You can prevent the spread of yellow floating hearts by 1) not purchasing this plant for water gardens and 2) practicing the Clean, Drain and Dry method for watercraft prior to moving them between lakes. See the video.

Report it: If you find this plant in Michigan, remove it if possible, do not put it back in the water and call the nearest DNR Operations Service Center.