Participants checked steelhead for fin clips and found that some rivers depend much more heavily on stocked fish than others.

The Great Lakes Angler Diary is an online reporting system that allows anglers to share data in a confidential manner. Last year, diary users began to focus their efforts on river steelhead. In all, 49 participants collected complete data sets that included information on 1,380 steelhead caught between October 1, 2020, and May 31, 2021. In addition to collecting data on catches, participants filled out a year-end survey to weigh in on management issues and let biologists know how fishing success compared to past years.

One key aspect of the program involves checking for fin clips and other marks. Since 2018, all yearling steelhead stocked in Michigan waters have been marked with an adipose fin clip. This means that nearly all returning steelhead of lake-age 1, 2, and 3 would have been marked last year but some older stocked fish would not have been marked. This means that we cannot estimate a true %Wild, but by looking at %Clipped we can get a sense for how stocked and wild fish contribution varies from one river to another.

Where the wild fish are

Not surprising, the Pere Marquette had the lowest contribution of clipped steelhead, with roughly 98% of steelhead unclipped. The PM has a longstanding reputation as a producer of wild-spawned steelhead thanks to groundwater inputs, clean water, a forested watershed, and a lack of dams. Volunteer effort was mostly concentrated in the mainstem upstream from the confluence of the Big South Branch, which is the only tributary that receives stocked steelhead. Based on our results, it seems like very few of these Big South stockers stray into upstream waters of the mainstem.

More surprisingly, the farmed and urbanized Grand River watershed also had a high prevalence of unclipped fish that was on par with the more forested Betsie River. As with the PM, program participants in the Grand tended to fish in upstream areas of the watershed (including coldwater tributaries like Prairie Creek). The few fish that were caught by volunteers in the Grand River below Grand Rapids showed a higher %Clipped, but more effort is needed in downstream areas.

In watersheds where participants reported more steelhead, the confidence interval is not as wide. For example, 164 steelhead were reported from the Pere Marquette, giving a confidence interval of 0.6% to 5.2%. This is a spread of only 4.6% versus the 20% spread on the Black River, which shows why it is important to get more participation from anglers in order to improve the precision of %Clipped estimates.

Other popular Lake Michigan watersheds like the St. Joseph, Kalamazoo, Manistee, and Muskegon contained a mix of clipped and unclipped fish. The White River showed a high prevalence of unclipped fish, but also had a wide confidence interval due to the low number of steelhead reported (17). For next year, we are adding the North Branch of the White River as a reporting option in Great Lakes Angler Diary since natural reproduction may be higher in the North Branch.

In the Lake Huron basin, our point estimate of 38% clipped in the AuSable River watershed only tells part of the story. In the mainstem of the AuSable, we estimated that 47-70% of steelhead were clipped. This is a wide range due to the relatively low sample size (66 steelhead) and even mix of clipped and unclipped fish. Even so, steelhead in Van Etten Creek (one of the principal tributaries of the lower AuSable) clearly showed a higher prevalence of wild fish with only 11-29% clipped.

The Clinton River is one of the most accessible and urbanized steelhead rivers in Michigan, flowing through portions of Oakland and Macomb County and into Lake St. Clair. Even so, the Clinton River watershed produces significant numbers of wild steelhead. Great Lakes Angler Diary users reported 215 steelhead caught from the Clinton, providing a point estimate of 66% clipped.

Last season’s data collection was very helpful, but we could really use anglers help to get even better estimates for the upcoming season – particularly if they fish lower river areas on the Manistee, Pere Marquette, Muskegon, or Grand River. We are also looking for more active volunteers on Lake Superior streams and the Huron River in southeast Michigan. Follow these steps to sign up today!

At the end of May you will be asked to take a short survey and verify that your information for the previous season is complete. Providing accurate measurements to the nearest quarter inch is very important, but if it is not possible to measure a steelhead that is caught and released it is also acceptable to estimate the length. 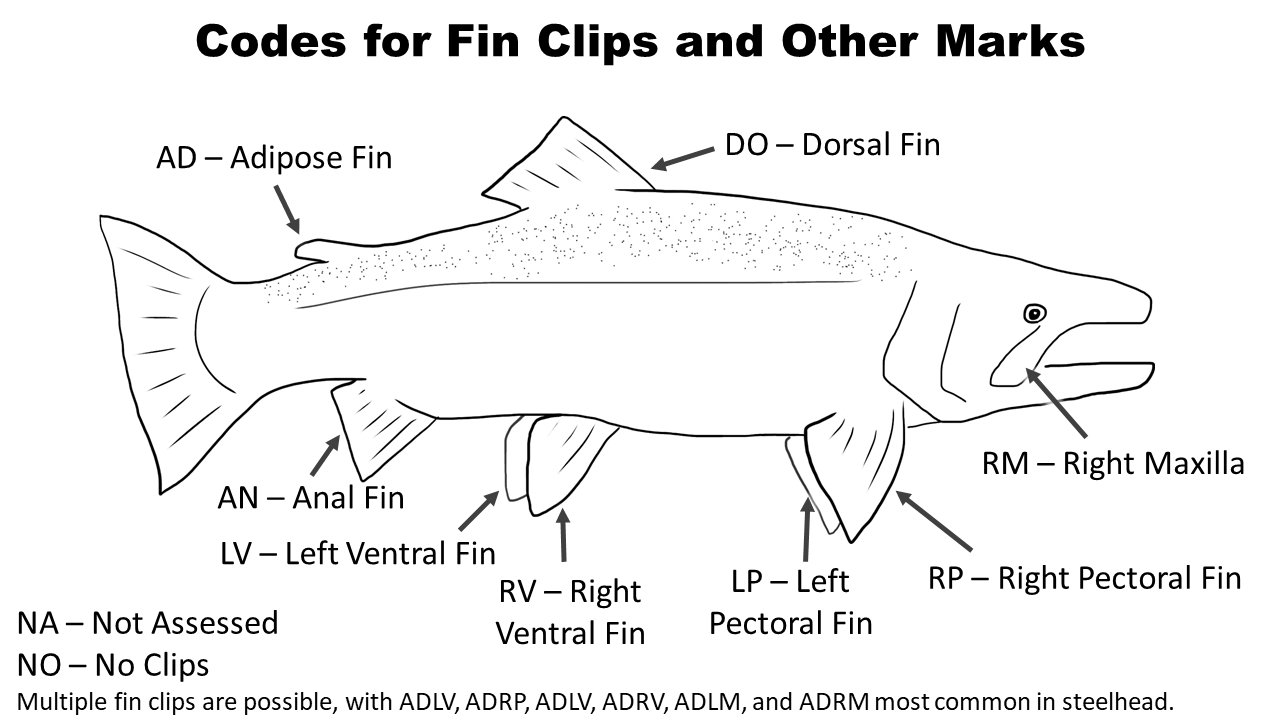