Maximize your economic returns from phosphorus and potassium fertilizer applications to soybeans.

The keys to maximizing the economic returns from phosphorus (P) and potassium (K) fertilizer applications are a comprehensive soil testing program and maintaining P and K soil test levels above their respective critical levels. The critical level for a given nutrient is the soil test level at which 95 to 97 percent of the crop’s yield potential will be reached with no additional inputs of the nutrient. 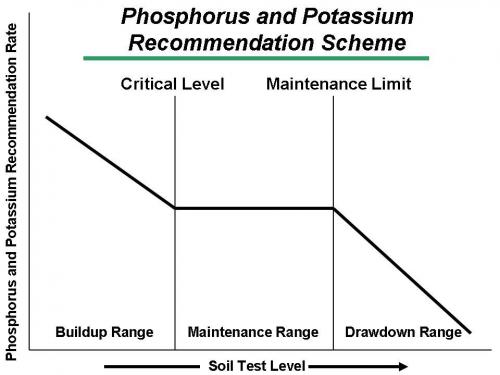 The critical level for phosphorus is 15 ppm and the maintenance range for soybeans is 15 ppm, so P soil test levels should be maintained between 15 and 30 ppm. Because soybeans remove 0.8 pounds per bushel of P2O5, maintenance levels of P fertilizer are required to keep P soil test levels in this range. For a 60-bushel per acre soybean crop, this is 48 pounds per acre of actual P2O5 or 90 pounds per acre of monoammonium phosphate (MAP) or 100 pounds per acre of diammonium phosphate (DAP). Spring application of P fertilizers is recommended over fall application when soil pH levels exceed 7.4. This practice increases P fertilizer availability by reducing the amount of P tied up in the soil.

The critical K level is calculated by multiplying the cation exchange capacity (CEC) by 2.5 and adding 75. For example, the critical K level for a soil having a CEC of 12 meq per 100 g is 105 ppm [(12 x 2.5) + 75]. The maintenance range for soybeans is 30 ppm, so the K soil test level for this soil should be maintained between 105 ppm and 135 ppm. Because soybeans remove 1.4 pounds of K2O per bushel, the maintenance application rate for a 60-bushel per acre soybean crop is 84 pounds of actual K2O or 140 pounds of Muriate of potash (0-0-60) per acre. When applying K fertilizer prior to planting soybeans, spring applications are recommended over fall applications on coarse-textured soils having CECs less than 6 meq per 100 g and organic soils to avoid leaching losses.

Maintenance P and K fertilizer applications can be applied biannually in corn-soybean rotations under the following conditions: