Every late spring and early summer when plants suddenly put on a great deal of growth because of extra rain, some people become worried. Could those big plants be the dreaded giant hogweed they have heard about? Many calls come into Michigan State University Extension with questions and concerns.

It is possible to go online and search for “giant hogweed look-alikes” and find a number of sites, but these are usually just rehashing the same plants, and not all big plants are covered. People are concerned because they have discovered big plants they cannot recognize. They sort of remember parts of the giant hogweed description, like purple stems and large leaves or hairs on stems. When their heart starts to race, the rest of the description is forgotten. Pokeweed and giant ragweed are two Michigan plants that have attracted attention by being similar in the viewer’s eyes.

Phytolacca americana is a perennial native plant. Pokeweed can grow 9-12 feet tall under good conditions. Stems are smooth and soft green when the plant is young. As the plant grows and stems age, they are uniformly reddish or soft purple and are relatively smooth. There may be a single stem or multiple stems. Leaves are green and smooth with a plain margin. Leaves are slightly egg-shaped with a pointed tip and have an alternate placement to each other on the stems.

Pokeweed is currently blooming with small white and green blossoms, often showing a soft pink color. The flowers will become dark purple berries that are reminiscent of a loose cluster of grapes. All parts of the plant are toxic for people to eat, but birds and other critters relish the berries. Young plants were boiled several times and eaten in some places in the south, and this was called “poke sallat or poke salad.” The berries have a crimson juice that in the past was used for dyes. The plant produces a massive taproot that is often branched as the plant matures. Native Americans used this plant for medicinal purposes as a purgative. 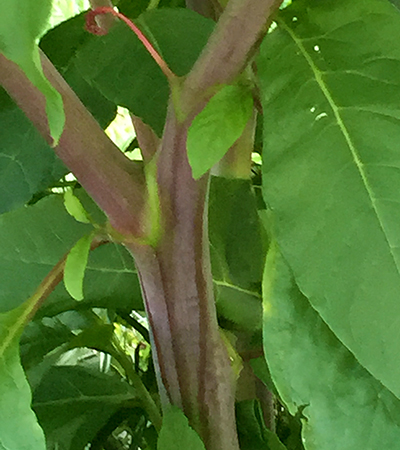 Pokeweed stems are uniformly reddish or soft purple as they age. Photo by Patrick Voyle

Ambrosia trifida is an annual plant with its origins in Europe. It reproduces by seeds. Stems are coarse, rough, hairy and slightly ridged. It can grow to 12-18 feet tall on rich, moist soils. Leaves are opposite of each other on the stem and have three pointed lobes, but occasionally five lobes. Leaves have a subtle, serrated edge. There are two kinds of flowers, male and female, on the plant. They grow in spikes at the end of branches and bend over slightly. 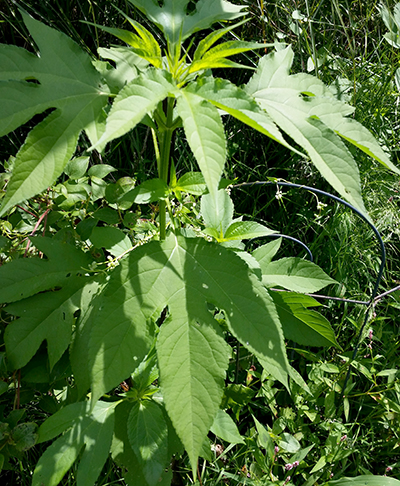 Smart gardeners have already checked out giant hogweed websites and the really smart ones have purchased books so they can identify plants on their property. For more help in identifying common giant hogweed look-alikes, see “Common plants are being mistaken for giant hogweed.” For photos and more information of giant hogweed, see “Giant hogweed: Not widely spread in Michigan.”