Prune out fire blight in the winter

Winter is the perfect time to remove fire blight cankers and reduce the disease in the spring.

I often wonder where fire blight comes from in the spring. Often, fire blight strikes are localized in several areas in an orchard. If I get to the orchard early enough when the symptoms are just starting, I usually find shoot blight symptoms on a limb that has an old canker from last year. The old canker was the source of the infection. Fire blight bacteria do not survive well outside the tree and do not overwinter outside of a host. That means the fireblight must come from trees that are already infected. Next year’s fire blight will come from trees that had active infections last year. Bacterial ooze from overwintering cankers is the cause of infections during bloom. 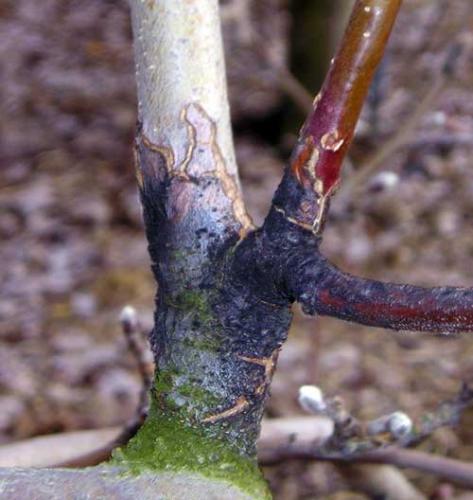 A fire blight canker is visible at the base of these shoots. Fire blight
ran down the branch at the lower right and into the base of these
shoots. The edges of the canker are easy to see. All the infected
tissue should be removed.

There are antibiotics that most growers use during bloom to reduce the spread of this disease, but relying on antibiotic sprays at bloom and ignoring other culture practices to reduce the disease only sets you up for an unpleasant surprise if the antibiotic sprays fail due to timing, conditions or resistance. Michigan State University Extension teaches that one of the keys to fire blight control is sanitation. I believe that growers need to reduce fire blight when they can.

Winter is the perfect time to remove fire blight. The disease is inactive because of the cold, so you won’t spread the disease with your pruning tools. Even if you do cut into wood that contains bacteria, their numbers are small and they can’t survive on the exposed surfaces of tools or pruning cuts. I suggest you prune out all the visible symptoms of fire blight. 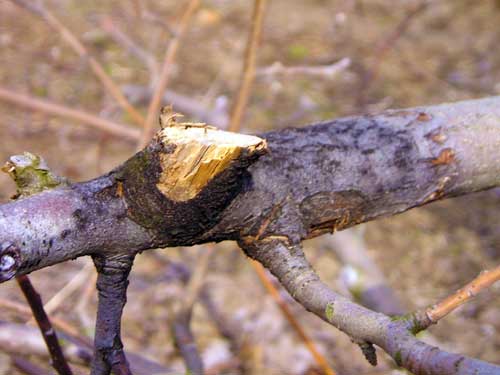 The pruner should have taken this canker, not just cut off the infected
branch leaving the canker behind to start the disease cycle again this spring.

Affected tissues are easy to recognize. They appear black and dry. Often the leaves are still on in the early winter and the leaf stems usually remain until spring. During the growing season, fire blight spreads rapidly in young tissue. In old tissue, fire blight forms cankers, sunken areas on the trunk and shoots. These cankers are always associated with shoots that were killed last year. The fire blight quickly kills young tissue and moves down the shoot to larger stems.

All cankers should be cut out. It is commonly accepted that if the canker has a well-defined margin, the tree has walled off the infection and further movement is unlikely. While this is generally true, I have seen enough movement from old cankers that I don’t recommend leaving a canker even if you think they are walled off. It is very hard to tell. 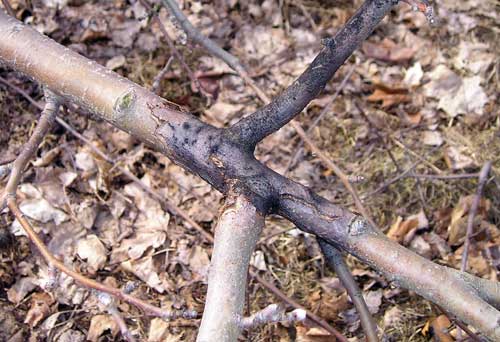 This entire mess should have been removed with a cut between the canker
and the trunk on the scaffold in the upper left.

Several years ago I visited an orchard in the spring that had widespread fire blight the year before. I was looking for cankers and wanted to document the beginning of oozing at bloom time. The grower had made an effort to remove all the cankers and I found very few cankers in the orchard that he and his pruning crew had missed. There was very little fire blight in that orchard in the spring. It would have been easy for the grower to remove the fire blight in the early season because that year there was very little blossom blight and cutting it out early would have been worthwhile.

Trees that show symptoms of fire blight for several years in a row should be removed. This continuous infection is an indication that the fire blight bacteria is systemic in the tree and will continue to express symptoms each year and serve as an infection source inoculating the orchard every year. Continuous pruning of the same infected trees year after year make no sense.