Learn how to scout and control the red headed flea beetle, a new pest for those growing nursery stock.

The red headed flea beetle (Systena frontalis) has been identified as an occasional pest in ornamental nurseries in Michigan and other states in recent years. The following information will assist nursery crop producers in identifying the pest, host range, life cycle, damage and control strategies.

Eggs are pale yellow, 0.7 to 0.9 mm and oval in shape. The larvae are creamy-white and have a brown head capsule and generally are 5 to 10 mm in length (Photo 1.) Fine hairs cover the body. A projection on the top of the last segment of the abdomen is diagnostic (Photo 1). The red headed flea beetle larva goes through three larval instars before pupation. 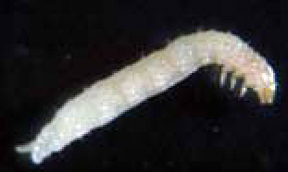 Adult beetles are shiny black with a reddish head (Photos 2 and 3) are about 3 to 6 mm long. Antennae are nearly half as long at the body. This insect has hind legs that are modified for jumping, thus the name flea beetle. 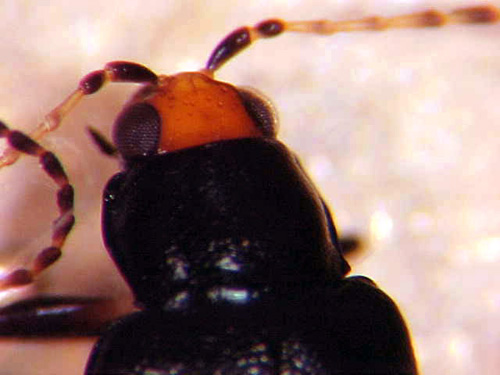 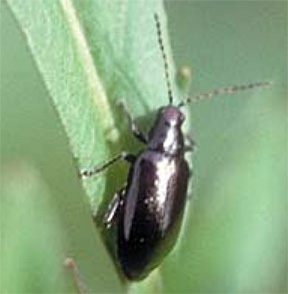 This insect has been reported to feed on many different crops and weeds across the United States. These include cabbage, beans, beets, corn, cranberries, blueberries and alfalfa. They also feed on many common weeds found in and around nursery crops. Nursery crops affected include Physocrapus, Weigelia, Cornus, Forsythia, Itea, Hydrangea panniculata types and Ilex.

Information on this insect’s life cycle is very limited. What we do know is that the immature beetles (larvae) develop in soil, perhaps also in potting media, and feed on organic matter and roots. We have not heard of or seen any significant damage to nursery plant root systems. Adult beetles emerge and are active from late June through mid-September in Michigan. This adult emergence would begin between 550-750 degree days base 50 degrees. This insect produces up to three generations per year, which makes it a significant pest to nursery stock.

Adult beetle feeding occurs on both the upper and lower surface, causing a skeletonizing effect on leaf tissue (Photos 4 and 5). Larval damage to non-nursery crops has been reported to be girdled roots and subsequent death of the plant. 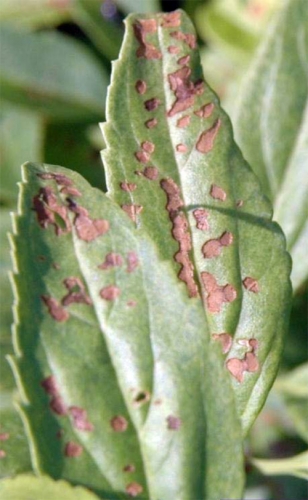 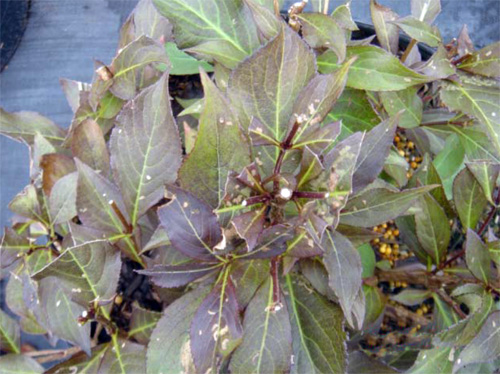 Adult beetles can be captured in a sweep net or by shaking the plants vigorously or brushing the foliage over a white cloth.

Any broad spectrum insecticide will control the adult beetles. Insecticides like bifenthrin, carbaryl, cyfluthrin, chlorpyrifos and dinotefuran will work. Repeat foliar sprays may be needed if adults are found during weekly scouting of your crops.

Evenings in the Garden: Christmas Tree Production in Michigan