Reviewing the origins of property rights tension in American society

The struggle between private property rights and the good of the community is nothing new; it is older than our nation.

Thomas Jefferson, along with other members of the Constitutional Convention, helped develop the American philosophy of property rights. Jefferson wrote “…there exists a right independent of force; that a right to property is founded in our natural wants, in the means with which we are endowed to satisfy these wants, and the right to what we acquire by those means without violating the similar rights of other sensible beings”. In other words, the desire for private property is innate because it confers certain rights, but those rights end where another’s begin. 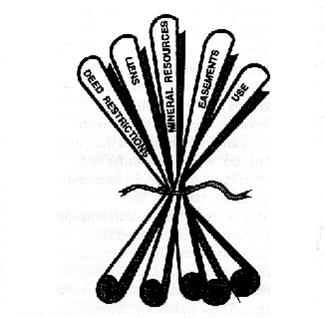 Today, we find ourselves on a property rights continuum and, with every new piece of legislation or court ruling, our society moves back or forth between slightly more individual rights to property or slightly more governmental powers to regulate property.

Another way to think about the property rights continuum is in terms of how many “sticks” we hold in a bundle of rights to land (see graphic). A strong notion of individual rights would mean one’s bundle is larger than would be under the opposing view.

There is no single, recognizable, exhaustive list of the rights contained in the bundle of rights. The rights are constantly changing, depending on the statutes that are passed, the court cases that interpret these laws and the constitution. For example, many times when a court decides a zoning case it is defining the contents of the bundle of sticks by saying, you do or do not have the right to do that with your land. Historical debate about the role of government in private property eventually ushered in statutory regulations over the individual use of property. Today in Michigan, two of those statutes are the Michigan Zoning Enabling Act (Public Act 110 of 2006, as amended) and the Natural Resources and Environmental Protection Act (Public Act 451 of 1994, as amended).

To learn more about the history of property rights in American society and the sources and limitations of governmental power in the U.S. and Michigan, register for the Michigan State University Extension Citizen Planner program or take Citizen Planner Online.

The evolution of the New Economy: The digital economy

What is a census and what kind of data is collected?