I recently noticed root aphids have been detected feeding on succulent plants like Sempervivium spp. in greenhouses. These whitish aphids, as with their name “root aphid,” can be noted in the root systems and cause leaf yellowing, plant wilting and stunting of plants. According to Ray Cloyd from Kansas State University Department of Entomology, “Root aphids (Pemphigus species) overwinter as eggs and may feed on plants such as sedum, veronica, aster and coreopsis. They will also feed on herbs such as oregano and basil, and on hosta. Root aphids have piercing-sucking mouthparts; however, they feed on root tissue as opposed to aboveground plant parts (e.g., leaves). Root aphids may be misidentified as mealybugs because they are covered with white wax; however, they are generally smaller than mealybugs.”

Root aphids do not move around as much as foliar feeding aphids like melon aphids or green peach aphids, but will cause serious damage if not detected. They can move from plant to plant via the drainage holes in pots, or through irrigation water that drains from one pot to another. Early detection is critical, so periodically check succulents and other potential host plants by knocking off the pot and examining the roots. If root aphids are detected, remove infested plants from the facility.

Avoid carrying-over stock plants or “pet plants,” which may harbor root aphids and be a potential source of infestation. In addition, use only new containers; avoid re-using old containers to reduce the risk of root aphid hitchhikers infesting new stock you brought in. 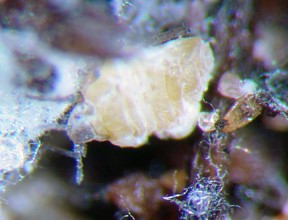 Managing root aphids with insecticides may be limited because the entire growing medium profile must be thoroughly soaked, and the growing medium, depending on the percentage of bark and peat moss, may inhibit activity by binding to the active ingredient. Controlling root aphids with either contact or systemic insecticides will be a challenge because of the protective waxy coating present on the later stages, which prevents direct contact with the insecticide.

According to Cloyd, “Root aphids may hide under the root ball thus allowing them to escape exposure to any insecticide residues. Systemic insecticides may not be effective against root aphids as insufficient (non-lethal) concentrations of the active ingredient may not accumulate in the roots where they are feeding.”

Michigan State University Extension ornamentals entomologist David Smitley recommends applying imidacloprid or dinotefuran as a soil drench. Because the insecticides are absorbed by the roots, they can work well on root aphids. However, both insecticides move upwards within the plant, so they may not remain in the root tissue very long. For that reason, a second application may be needed two weeks later. Check product labels to see if it can be used more than once per season. Also, both of these insecticides are neonicotinoids and could be toxic to pollinators visiting the hosta flowers. Of these two products, dinotefuran will move into the plant more quickly and will not last as long.