While China is building a gigantic modern-day upgrade of the famed ancient Silk Road resplendent in global cooperation in the name of economic expansion, a group of sustainability scholars point out that the Belt and Road Initiative (B&R) also could be a superhighway of environmental progress.

China’s initiative is essentially supersizing the ancient Silk Road – which connects China to the Mediterranean – and weaving it into the Maritime Silk Road’s ocean-based routes to connect China with Asia, Europe, and Africa, as well as along the Indian Ocean and Mediterranean Sea.

It’s an ambitious initiative, involving some 65 countries that are home to two thirds of the world’s population and cover one-third of the global economy.

Money drives it, as the project would shape world economies. But it also could create routes filled with opportunity. Taking advantage of that complex and vast expanse demands a different way of measuring and looking at the world, according to a Michigan State University professor in October edition of Ecosystem Health and Sustainability.

“The Belt and Road Initiative could be built to guide great progress in global cooperation,” said Jianguo “Jack” 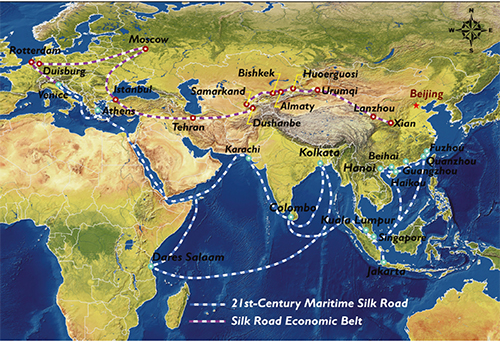 Liu, director of the Center for Systems Integration and Sustainability (CSIS), and his colleagues in China and the United States use the new integrated telecoupling framework, which allows scientists to understand and govern the interconnections of socioeconomic and environmental issues that span the globe. That would allow factoring the changes that ripple across the lands, accounting for what otherwise might be unforeseen and unintended consequences.

In other words, they stress that an enterprise as sweeping as this initiative demands new, more holistic ways to understand its effects. The stakes, Liu said, are particularly high with environmental concerns such as climate change, air and water pollution and food security demand immediate solutions.

The recommendations in the policy forum, whose first author is author Dewei Yang of the Chinese Academy of Sciences in Xiamen, China; are created under the guiding principle of telecoupling – never forgetting that effects flow back and forth, touching not only beginnings and ends but spilling over everywhere in between, sparking other impacts. Ignore all that action at a peril of cascading consequences never anticipated.

Among the group’s suggestions:

In addition to Liu, “New road for telecoupling global prosperity and ecological sustainability” was written by lead author Dewei Yang of the Chinese Academy of Sciences in Xiamen, China; Jingjing Cai, Vanessa Hull, Kaiyong Wang and Yin-Phan Tsang. Yang and Cai were visiting scholars at CSIS. Hull and Tsang were CSIS members.