Look for signs of winter damage to trees and shrubs as you start your spring yard clean-up.

With the arrival of spring, many homeowners are starting on their spring yard clean-up. This annual rite of passage provides an opportunity to inspect landscapes for evidence of damage to trees and shrubs that may have occurred during the winter. From a home landscape perspective the winter of 2010-11 was largely uneventful for most of the Lower Peninsula. February snowfall was heavier than normal in many locations, but most areas avoided temperature extremes – high or low – that can often lead to problems for landscape plants. In late February, a heavy ice storm caused considerable to damage to trees and other plants across a wide swath of southern Michigan from Kalamazoo to Monroe. For those outside the path of that storm, most of the winter injury that is now becoming evident is what we could consider “typical” winter injury – the kind of damage we would expect to see in a normal Michigan winter.

So, what types of winter injuries are “typical” in the Lower Peninsula?

Many conifers are subject to needle drying of winter burn during the winter. The most common symptom of winter burn is brown or red foliage on the exposed (often south) side of the tree. In some cases, trees will have a snowline below which no damage occurs since those needles were under snow when the rest of the tree was drying. Winter burn occurs frequently on dwarf Alberta spruce but can occur on other conifers as well. 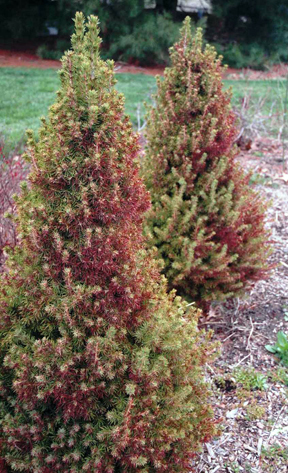 Action: Wait and see. In most cases winter burn affects needles but not buds. This means that the trees will be able to produce new growth that will cover damaged needles. In many cases, it is hard to find evidence of winter burn by late spring/early summer.

Road crews apply sodium chloride and other deicing materials to keep roads clear in the winter. Many plants, especially eastern white pine, are sensitive to salt spray from roadways. Acute damage caused by direct salt exposure is easy to spot since the damage is usually greatest on the side of the trees facing the road. Sensitive trees such as white pine can usually survive one-year’s damage but repeated acute damage can ultimately disfigure or kill trees. 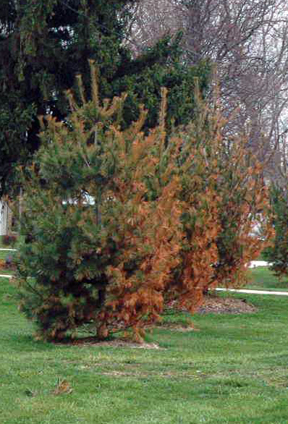 Deicing salt injury is a common occurrence on white pine near major roadways in Michigan.

Action: If possible, select trees and shrubs that are relatively salt tolerant. The Morton Arboretum has compiled a list of salt tolerant trees that includes plants that are hardy in Michigan. For existing trees, protect them from salt exposure using a barrier such as snow-fence covered with burlap.

Perhaps the most widespread winter damage on trees and shrubs in Michigan is animal damage. Several animals can damage landscape plants but the most common are small mammals and deer. Small mammals such as mice, rabbits, squirrels and voles cause damage mainly by gnawing on trunks and branches. Despite their small size, these animals can kill trees by removing bark and underlying tissue around the circumference of a tree trunk, a process referred to as “girdling.”

If a large portion of trunk circumference has been girdled, trees are unable to move energy reserves between roots and shoots, and will eventually die. Deer can cause extensive damage to trees and shrubs due to feeding and also through rubbing their antlers. Deer feeding is often indicated by a “browse line” based on how high deer can reach.  Deer rubbing can cause major deformation to trunks and can even kill trees by girdling. Deer rub damage can be quite severe on small trees.

Left, deer can damage trees by rubbing their antlers on trunks and branches. Right, a 'browse-line' on arborivitae is a tell-tale sign of deer feeding. 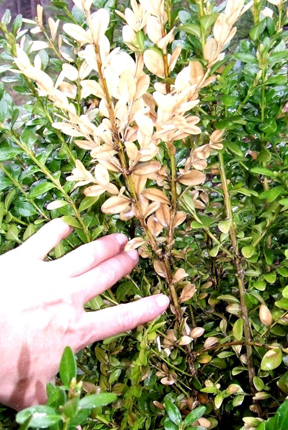 Action: Dealing with problem wildlife usually requires a multifaceted approach. Some of the most common methods to reduce damage include fencing, repellents, habitat reduction, and removal. The Internet Center for Wildlife Damage Management  provides a range tipsheets and other useful resources for identifying wildlife damage and strategies for reducing wildlife impacts on landscapes.