Crop conditions look good throughout much of the region, and recent rain has helped alleviate dry conditions (for most).

Most locations in the region have remained drier than usual this season (Fig. 1), ranging from near normal to 4.36 inches below the five-year average (note Allegan only has 2015 for comparison, so that is likely not useful). However, there is a pocket from Lawrence to Cassopolis that has received above-normal rainfall this season.

The storm front that moved through the area on June 22-23 helped to alleviate this regional deficit (Fig. 2), dropping 0.87 inches on average; however, as usual, the rain was not uniform (Fig. 3). Areas that received the most precipitation – southern Kalamazoo and northeastern St. Joseph counties – may have seen some nitrogen loss due to leaching. We have not heard of significant hail damage from these storms so far. Southern Berrien County may also have some issues with ponded water on the heavier soils where drainage can be a significant issue along US-12.

Temperatures remain warmer than normal and, according to the National Weather Service extended forecasts, this is not likely to change during the next month. The 6-12 day outlook forecasts cooler than normal temperatures, and much drier than normal conditions. The 8-14 day outlook shows temperatures heating up and the drought conditions deepening for much of Michigan, including the southwest portion of the state. Growing degree-days (86-50) accumulated since May 15, when many producers were able to get into fields to plant, ranges from 600 to 730 with an additional 140 to 150 expected in the coming week (Fig. 4).

Early planted corn is at V8-V9, some fields taller. Stands planted in late April look better than early May. The majority of corn was planted in mid-May. This corn is mostly V5-V6. The best stands are located in fields worked when moisture levels were appropriate for the soil type. If the soil was worked wet, there was less stand uniformity.

Nitrogen continues to go on in the later planted fields. Given the highly variable precipitation totals, growers should evaluate the potential for nitrogen losses on their individual fields. Nitrogen losses from UAN applied to warm soils where rainfall was high can be significant in sandy soil profiles. Once the soil approaches saturation, the nitrate component can move with the wetting front. Our heavier prairie soils (Kalamazoo/Oshtemo complex) have enough storage capacity that they should be able to hold onto their nitrogen and most of the water received from recent rainfall events quite well. If the weather turns as dry as expected, we may have the opportunity to put on additional nitrogen through injection with the pivot.

Be on the lookout for weed escapes. Fields tend to be reasonably clean, with a few escapes of the usual suspects (lambsquarters and velvetleaf). If you have glyphosate-resistant corn, remember that the cutoff for application of this herbicide in corn is 30 inches or V8, whichever comes first. Watch weed sizes and maximum corn application timing if cleaning up weed escapes with other products.

We will be looking at emergence of white grub species, including Japanese beetles and Asiatic garden beetles, in earnest within the next couple of weeks. Drier conditions have helped to keep corn leaf diseases in check so far.

Early planted soybeans are growing quickly. Later planted soybeans are V1-V2. Weed control on early beans looks pretty good so far. Some of the later planted fields are pretty weedy, as growers are splitting time between nitrogen application and spraying soybeans. Again, with drier weather in the mix, spraying earlier rather than later can help preserve soil moisture in drier areas. If using glyphosate, be sure to use AMS at 17 pounds per 100 gallons of spray, and keep the rate of glyphosate towards the higher end of the labeled rate for the product if conditions are hot and dry when spraying, or the weeds are larger.

Be sure to review the label of the product you are using for the proper application rate. You can review surfactant loadings and the acid equivalents for many glyphosate products labeled for glyphosate resistant crops in Table 10 of the Weed Control Guide for Field and Forage Crops, by Michigan State University Extension.

Wheat is approaching maturity quickly across the region. Most advanced fields are turning in earnest now. Lack of soil moisture during late grain fill on dryland fields will reduce yield potential substantially. In areas that caught significant rainfall over the last couple of weeks, the yield potential should still be quite good.

Fig. 1. Rainfall (inches) in south central and southwest Michigan from April 1 through June 23, 2016. Allegan, Dowagiac and Oshtemo five-year averages are based on only one, two and three years of data, respectively. 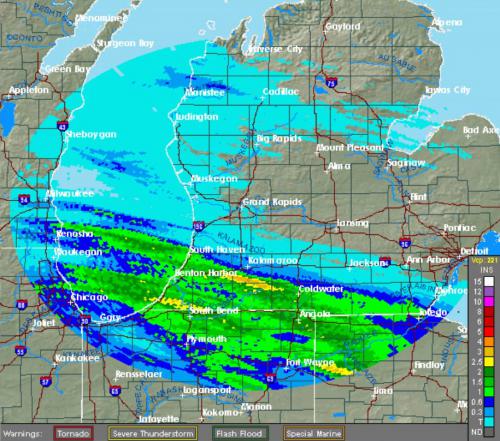 Fig. 2. Precipitation amounts received with the June 22-23, 2016 storm system, as recorded by the National Weather Service. 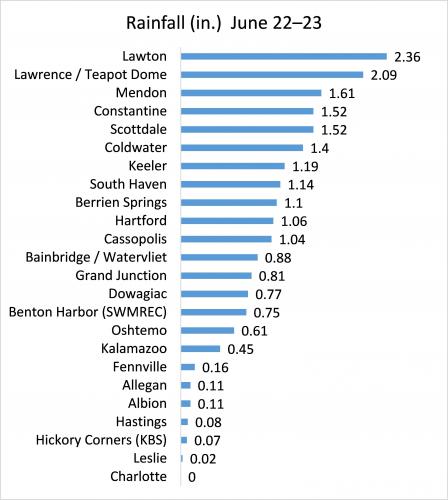 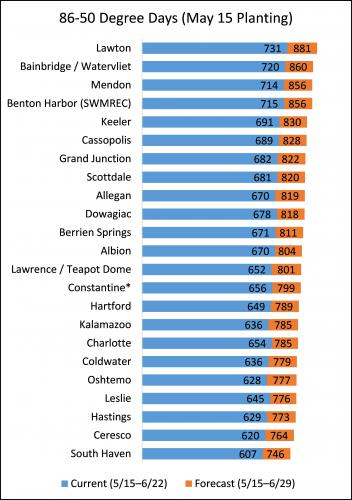