Heavy rains have relieved drought symptoms, but can cause late-season diseases. Late-season pests are flying.

Last week was hot and humid. High temperatures rose into the 90s and then fell into the mid-80s for the weekend. The overnight lows were in the 60s and 70s. Strong thunderstorms moved through the area late Friday and early Saturday, Aug. 12-13. There were reports of 1 to 5 inches of rain from these storms in a short period. This heavy rain overwhelmed many Michigan State University Enviro-weather stations, which recorded only about 2 inches of rain. Heavy rains Monday, Aug. 15, relieved drought conditions for most of the region.

Our daily heat accumulations last week were high due to the hot weather. Daily growing degree-day (GDD) accumulations were 34 GDD base 42, 31 GDD base 45 and 28 GDD base 50. We are still about a week ahead of normal for heat accumulation. The upcoming week will be cooler with high temperature near 80. There is a chance of rain Thursday night, Aug. 18, through the weekend.

Western flower thrip is causing significant fruit blemishes on nectarine in some orchards. Constriction canker (Phomopsis) is causing gumming of branches and terminal decline. Peach scab, a fungal disease, can build up on fruit with a minimum spray program. Brown rot control programs should rotate among the different classes of fungicides to stave off resistance problems. Save the most effective fungicides for when ripening fruit are coloring and most susceptible to infection. Bird pecks in the fruit serve as easy infection points for brown rot. 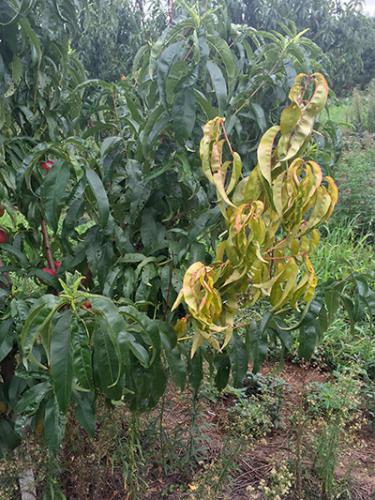 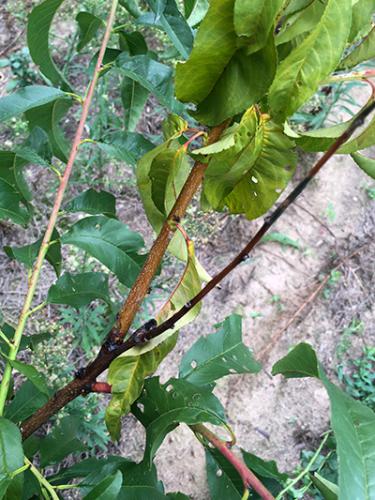 Close up of constriction canker infection showing gumming on branch.

Cherry leaves need to be protected from cherry leaf spot all season, ideally to keep the foliage in good shape through September. Cherry leaf spot disease pressure has been relatively light in most tart cherry orchards due to relatively dry conditions up to now. Growers can do modest pruning in cherries after harvest through August.

Plum harvest of Vanier, Ozark Premier, Castleton and Redheart is underway in central Berrien County orchards. Bacterial spot and brown rot are the primary fruit problems now. Step up brown rot spray programs as fruit start to color and ripen and knock off infected fruit. Fruit left on the tree until soft are more susceptible to SWD infestation.

Apple harvest date estimates are available from MSU Enviro-weather for weather stations across Michigan. Retain applications for fruit drop and harvest delay management are targeted for 30 days before expected harvest. Zestar and Ruby Mac are testing 15.2 and 18.6 pounds of firmness, respectively, with the standard 7/16-inch diameter probe and peel removed in central Berrien County.

Necrotic leaf blotch symptoms have appeared in susceptible varieties such as Golden Delicious and related varieties. This disorder appears when hot, dry weather follows wet, humid conditions. Light colored varieties such as Honeycrisp on dwarf rootstock can be exposed to direct sunlight and are prone to sunburn damage. Growers can reduce sunburn by applying materials such as Surround or Raynox.

Fruit entry holes from the larvae of codling moth or oriental fruit moth are easy to be found in unprotected fruit. Peak egglaying of second generation codling moth is underway now. Obliquebanded leafroller trap catch for the summer generation numbers are up for the third week and young larvae from this generation are feeding on fruit. Apple maggot trap catch numbers were higher this past week. Apple maggot flies emerge after summer rains (see “Managing apple maggots with insecticides”). Sooty blotch and flyspeck disease symptoms should be up in unsprayed apples. A general rule of thumb is reapply fungicides for these diseases after an additional 220 hours of leaf wetness, or 2 inches of rain has occurred following application.

Pear fruit are generally 2.25 inches or more in diameter. Growers are putting out boxes in orchards in anticipation of Bartlett harvest for processing.

Grape veraison is continuing in early and larger ripening varieties, including Concords. Pressure from grape leafhoppers, potato leafhoppers and Japanese beetles remains low in most vineyards. Third generation flight of grape berry moth continues and fruit damage is increasing. There will very likely be a fourth generation of grape berry moth this year. Where pressure is heavy from the third generation, a spray at 2,430 GDD from wild grape bloom may be needed. For this application, short pre-harvest interval materials should be used.

Blueberry maggot is another harvest pest. Anthracnose is the most common fruit rot found in harvested fruit. Systemic fungicides applied before irrigations can effectively prevent fruit rot. Fungicides applied after an infection are not as effective controlling this disease in ripe and ripening fruit.

Strawberry fields should respond to all this moisture. Growers should protect leaves from potato leafhoppers, leaf diseases and leaf feeding insect pests. Day-neutral strawberry growers need to protect their fruit against SWD.

Join us for the Peach and Plum Variety Showcase on Aug. 23 at 4 p.m. at the Southwest Michigan Research and Extension Center, 1791 Hillandale Rd, Benton Harbor, MI 49022. Growers can see, discuss and sample stone fruit from the MSU variety trials, commercial growers, nurseries and university breeding programs across Michigan and elsewhere. Fruit include yellow and white fleshed peaches, nectarines, donut, aprium and plumcot types. There is no charge for this meeting. Supper will be provided courtesy of International Plant Management and Summit Sales of Lawrence, Michigan.