Last week was a taste of fall. Highs were generally in the 70s with highs in the 60s over the weekend. Lows fell to the lower 50s during the weekend. The weekend was also marked by scattered lake effect showers. Rainfall totals for the month of July for the region vary from 1.5 to 4.25 inches with an average of 2.5 inches. The rainfall totals for the past week varied from 0.25 to 1 inch with an average of half an inch. Evapotranspiration rates fell from 0.2 inches per day to 0.15 inches during the mid-week and less than 0.1 inches over the weekend. Most areas have adequate soil moisture and other sites, especially those with sandy soils, are short.

This week will be slightly warmer with highs in the upper 70s and lows near 60. These cooler temperatures are ideal for spotted winged Drosophila (SWD) and growers should expect increasing pressure from this pest. Growing degree day (GDD) accumulations last week were about half of the previous week. We are about a week behind the five-year average in growing degree days. Check your local weather station and conditions at Enviro-weather.

Southern Berrien County is generally short on moisture on sandy sites, causing some fruit sizing problems for peaches in their final swell. Japanese beetle trap catches are in the fourth week of relatively high numbers. The highest trap catches of SWD from locations Michigan State University Extension monitors were 209 (34 males and 175 females) and 62 (17 males and 45 females). This is nearly a tenfold increase in female SWD trapped at the same locations the previous week.

Peach harvest of PF-7A, Rising Star and GaLa is finishing up the pre-Redhaven varieties, with the Redhaven window group of PF9A-007, Vivid, PF11 Peach, Redstar and Starfire lagging later than usual. The yellow-fleshed peento (flat) peach NJF18 is nearly ready with the white flesh peento types Galaxy and Saturn a few days later.

Bacterial spot, brown rot and some Rhizopus rot are the major issues now. Brown rot control programs and possibly insect control of SWD will need to be ramped up as we approach harvest. Oriental fruit moth trap catches have been steady at a relatively low level.

Sweet cherry harvest is done for most farms. Post-harvest pruning from now to early September can reduce bacterial canker problems, but should be done primarily on mature trees that have filled their space.

Tart cherry harvest in the area is done. Growers should continue to protect against cherry leaf spot, perhaps with additional spray coverage at the tree tops where the disease is usually most severe. Post-harvest pruning from now to early September will reduce bacterial canker infections that are favored by spring pruning under cool, wet conditions. Pruning should be done on mature trees and should not be severe as the practice is devigorating to the trees.

In plums, harvest of Japanese plum variety Shiro will start this week in some sites, with Vanette next week on sandy sites. We have some reports of sunburn of Japanese plum fruit, perhaps enhanced by bacterial spot damage to the exposed side. Fungicide sprays for brown rot should increase as fruit begin to color. Information on plums, including where to buy Michigan plums, can be found at the Michigan Plum Advisory Board website. 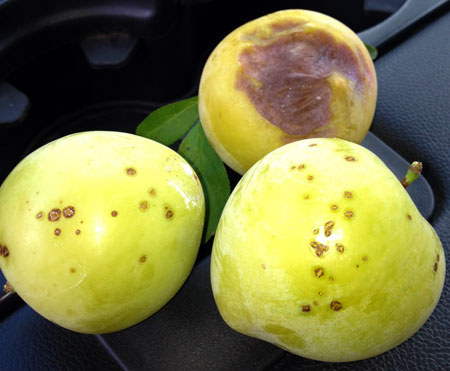 Apple harvest of Pristine will start soon in some sites. Growers should check the dates for applying Retain for stop drop control for the various apple varieties they grow to make sure they do not miss the application window. Sooty blotch and fly speck symptoms are now being reported on apple fruit. Trap catches for oriental fruit moth and codling moth male adults are generally low, however a few sites are in their second week of codling moth trap increase.

Apple maggot fly catch has been reported for two weeks in some area orchards. Growers who are participating in the Brazilian apple export program are reminded that the insecticides approved by this program as effective against maggot do not include many of the newer compounds. White apple leafhopper, European red mites, green apple aphids and wooly apple aphids have built to noticeable levels in a few orchards.

Pear fruit (Harrow Sweet) are approximately 1.75 inches in diameter. Growers should monitor for pear scab, Fabraea leaf and fruit spot and pear psylla activity. Pear psylla numbers are starting to increase in some sites. Pear fruit should be protected against codling moth.

In grapes, insect and disease wise, very little has changed since last week. Grapes have reached cluster tightening which makes them difficult to check for signs of grape berry moth. Trap catches for grape berry moth were 0 to 2 percent last week in the vineyards we monitor. Second generation grape berry moth egglaying is well underway, and growers should be checking bunches for feeding by larvae in addition to checking traps for flight of adult male moths.

The grape berry moth model on Enviro-weather is predicting that 1,620 GDD base 47, the start of third generation grape berry moth egglaying, will occur sometime next week, on or around Aug. 6-7 for Berrien County and much of Van Buren County.

Japanese beetle feeding is still taking place, although there seems to be less of it recently. Watch for damage to young vines and wine grapes. We are still catching SWD in traps along vineyard borders, but there is no risk to grapes at this time because the berries are too hard for the flies to penetrate. Grape leafhopper and potato leafhopper numbers in the vineyards we monitor have been low.

Black rot-infected berries are quite noticeable now. Certain vinifera cultivars remain susceptible to black rot through veraison. According to the grape black rot model on Enviro-weather, the most recent black rot infection periods were July 27-28 for Lawton, Mich., and July 28-29 for Fennville, Mich. and Southwest Michigan Research and Extension Center (SWMREC).

We have seen little in the way of powdery mildew so far. Downy mildew can easily become more serious in August when there can be many mornings with heavy dew on the vine. There is considerable downy mildew in the unsprayed sentinel plots we monitor.

In blueberries, mechanical harvest of Bluecrop and Jersey continues. Growers with ripening fruit need to scout for blueberry maggots and spotted winged Drosophila. Blueberry maggots are being trapped across the region. SWD trap catch rose dramatically last week across southwest Michigan. Most SWD traps are catching flies and numbers really took off last week. Growers who are not monitoring for this pest should be applying controls. Growers should also apply controls to suppress anthracnose and Alternaria fruit rots.

In strawberries, renovated fields are putting out new leaves and irrigation is needed where soils are dry to maintain good plant growth. Watch for potato leafhoppers as new leaves emerge and treat if needed to prevent this insect from stunting the new growth. Everbearing strawberries are starting to produce berries. Watch berries for signs of SWD. Infested fruit tends to have a soft spot on one side and small, white maggots may be present.

In brambles, harvest of summer red raspberries is finished. SWD numbers increased sharply last week. Growers should be monitoring their raspberry and blackberry plantings now for SWD. Our highest single trap catch last week in brambles was 175 females and 34 males from a trap in south Berrien County. Frequent picking of ripe fruit and removal of overripe fruit is important to keep SWD populations in check. One of the signs of infestation in raspberries is a red stain present on the receptacle when the raspberry is picked.

Another pest to watch for now is two-spotted spider mite. Two-spotted spider mite activity generally picks up when plants are stressed by heat and drought. Insecticides to control SWD in brambles and other insect problems should not be applied while bees are actively foraging.

We are beginning to pick fall red raspberries in the high tunnels. The Spotted Wing Drosophila Management Recommendations for Michigan Raspberry and Blackberry Growers has just been updated. For detailed fact sheets, identification guides and weekly reports on this pest during the growing season, see the MSU Spotted Wing Drosophila website.

The hop production workshop scheduled for Aug. 7 at SWMREC is full.

The next in-season grape IPM meeting will be at Lemon Creek Winery on Aug. 27 from 6 to 8 p.m. Contact the Berrien County MSU Extension office at 269-944-4126 to register or for more information about the program. Registration is $15 and includes supper. Speakers will be Stan Howell, Rufus Isaacs and Annemiek Schilder.

A Peach and Plum Variety Showcase will be held at SWMREC Aug. 27 from 4 to 7 p.m.