Tart cherry and blueberry harvest is underway in southwest Michigan.

The weather last week was sunny and cooler with highs in the 70s and lows in the 50s. Storms moved across the region early Monday morning, July 7. We have had a storm every Monday for the last three weeks. Rainfall totals were generally less than half an inch with more rain away from Lake Michigan. Water is standing in many fields. Recent rainfall has greatly exceeded evapotranspiration (ET) in many areas, but some areas report much less rain and dry soils. Soil temperature is about 70 degrees Fahrenheit.

This coming week should start cool with high temperatures in the 70s and highs rising into the 80s. There is a chance for showers mainly later in the week. Last week, we picked up about 180 growing degree days (GDD) base 42, about 23 per day, and 125 GDD base 50, about 18 a day. Current GDD accumulations lag behind our long-term average, but are similar to 2013, 2011 and 2009. See the GDDs for the last five years at Bainbridge, Michigan in northern Berrien County. We seem to be about a  week behind our long-term average, according to Michigan State University’s Enviro-weather.

Less damage was suffered from the July 6 storm compared to last week’s storm. Fruit struck by hail on June 30 is showing gumming, especially plums. Growers with fruit plantings close to soybean fields and wooded areas should watch for brown marmorated stink bugs, especially in the Michigan areas east of Stevensville, west of Niles, and east of Cassopolis.

Apricots are 1.5 inches and larger in diameter, with harvest of early varieties to begin next week in Berrien County.

Peach fruit are 1.5 to 2 inches in diameter with hard pits. Early varieties are coloring with harvest to begin next week for Early Star. Red Haven harvest for central Berrien County is predicted to begin approximately Aug. 3. We are seeing leaves curling lengthwise, normally indicating drought stress or root damage, on two- to three-year old trees with significant wobbling due to recent winds.

We still are seeing strong catches of oriental fruit moth in some orchards. Preharvest interval for Lorsban in trunk sprays for greater and lesser borers is 14 days (check label). Bacterial spot symptoms are increasing on leaves and fruit of susceptible varieties, with some leaf drop. Brown rot is showing up on fruit with split pits.

Sweet cherry harvest is ending. Fruit cracking and brown rot were a problem and birds had a feast. Growers with late-season varieties may consider testing fruit for spotted wing Drosophila, especially if fruit will be held without refrigeration on farm stands.

Tart cherry harvest has begun. Wind whip damage to fruit is now very noticeable. Cherry leaf spot is apparent in the upper canopy of some orchards. In other orchards, the yellow leaves were caused by bacterial canker. Growers should continue to apply sprays to control cherry leaf spot.

Japanese plums are 1 to 1.25 inches in diameter and European plums are 0.875 to 1 inch. Cracking and gumming of fruit and some leaf and fruit drop due to bacterial spot and hail is occurring in Japanese plums. Obliquebanded leafrollers, codling moths and brown rot can be problems in plums as we head into July.

Apple fruit range from 1.625 to 2 inches in diameter, with some summer apple varieties at 3 inches. The Maryblyt model predicts fire blight symptoms from trauma blight approximately 103 GDD base 55 F later. For the severe wind and hail of June 30, symptoms are expected to appear approximately July 6 based on weather data at the Southwest Michigan Research and Extension Center.

The North Carolina model for sooty blotch and fly speck diseases indicates we have received sufficient hours of wetness needed for spores to be available, so spray programs for these diseases should begin. Oriental fruit moth and, more recently, codling moth catches have declined, but are still at significant levels in some orchards. Spotted tentiform leafminer new mines in leaves are expected soon. Obliquebanded leafroller egg hatch is expected to begin approximately July 1 for central Berrien County.

Apple maggot adults were trapped in low numbers on June 30 at the Trevor Nichols Research Station near Fennville, Michigan. Sandy sites with early summer varieties tend to be most prone to apple maggot problems. Unsprayed apples and crabapples have been losing their leaves to apple scab for the last few weeks.

Pear fruit are 1.5 inches or more in diameter. Fire blight strikes are generally rare. Growers continue to tear out watersprouts as a way to remove protective habitats for pear psylla. The next generation of codling moth and obliquebanded leafrollers will target developing fruit.

Raspberries and blueberries are harvesting. Japanese beetles and spotted wing Drosophila (SWD) are the pests of major concern. Wet weather is good for disease development.

Grape berries are at berry touch. Concord grape berries will be at half their final weight soon as most areas will reach 1,200 GDD base 50 after April 1 later this week.

Southwest Michigan GDD summary for grapes from April 1 to July 6, 2014, according to MSU Enviro-weather

In blueberries, hand-harvest of Duke and other early varieties has begun. Bluecrop and other mid-season berries are beginning to color. Cane collapse from phomopsis continues with waves of cane collapse in some fields. Leaves of new shoots are large as a result of the abundant water this season. Growers are reminded the berries become attractive to blueberry maggots and SWD as they color and begin to ripen (see SWD recommendations for Michigan blueberry growers). Growers are advised to maintain relatively short harvest intervals to reduce the amount of time that the fruit is exposed to SWD. The wet conditions also set us up for fungal fruit rots (see “Control of pre- and post-harvest fruit rots in blueberries”).

Blueberry stem gall wasp galls have appeared in the northern growing areas. This wasp emerges and lays its eggs during bloom and currently the only effective control is to prune out the galls before the adults emerge next year. Very few mummy berries have been found so far this season. Growers interested in pre-harvest foliar sprays will want to read Eric Hanson’s article on “Blueberry quality and plant nutrition.” 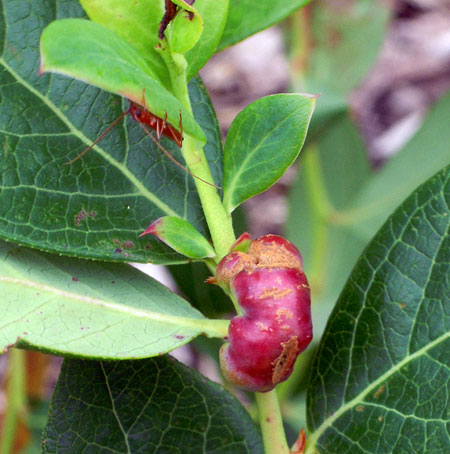 Strawberry renovation is underway. Renovation is a crucial time for weed control in strawberries and more and more growers are forgoing mowing at renovation for fields with good, healthy leaves. Growers need to be careful choosing herbicides as many can damage strawberries. Stinger is one of the few materials that gives good broadleaf weed control and causes little injury to strawberry leaves.

Bramble harvest of black raspberries (black caps) and red raspberries continues. Japanese beetles are out. Raspberries seem to be the favorite fruit for SWD and growers should be trapping to determine if controls are needed. MSU Extension has posted SWD recommendations for raspberry growers. More information is available on the MSU Spotted Wing Drosophila website.