Plants and crops continue to look good in the southwest region.

Last week, high temperatures were generally in the 70s and 80s, and lows were in the 50s. Rainfall across the region was spotty with thunderstorms associated with frontal systems moving north and south across the region. Winds on Wednesday night (June 12) in parts of Berrien, Allegan, Kalamazoo and Van Buren counties tattered foliage, broke weak limbs and snapped some apples at the graft unions. Rainfall totals varied from 0.5 to 1.2 inches.

The upcoming week is forecast to start a little cooler with highs below 80 for mid-week and then rising into the 80s by the weekend, with a very warm weekend. We could see continued thunderstorms when the weather front returns to this area. Soil moisture levels are generally good. We continue a week behind the average of the last five years in terms of growing degree days (GDD), but the relatively cool, moist conditions seem to have been excellent for fruit growth. Check your local weather station and conditions at Enviro-weather.

Fruit are sizing well with recent rains and moderate temperatures. No new plum curculio egglaying was reported. Few rose chafers around this past week; this pest has been only a minor problem. Oriental fruit moth numbers continue to drop as the first generation flight ends. San Jose scale crawlers should emerge about 780 GDD50 after Jan. 1, and currently the Southwest Michigan Research and Extension Center (SWMREC) is at 737 GDD as of June 17. Potato leafhoppers are becoming more common and growers should protect vulnerable plants, especially young apple and plum trees.

Apricots are about an inch in diameter.

Peaches are over an inch in diameter and getting close to pit hardening. June drop has reduced the crop. Growers continue to hand-thin where needed. The first commercial harvest of Redhaven peach for Berrien County is estimated to be about Aug. 2.

Oriental fruit moth trap catches are generally low at the end of the first generation flight. Flagging of branch terminals due to oriental fruit moth larval feeding was reported this past week. Bacterial spot symptoms on leaves of susceptible varieties are still generally scarce. Developing fruit are susceptible to bacterial spot and rusty spot (powdery mildew) until about pit hardening.

Sweet cherries are 15 to 27 millimeters in diameter and coloring. Bird feeding has started. They should be protected against plum curculio and cherry leaf spot. Sweet cherries are always susceptible to brown rot.

Tart cherries are 13 to 14 millimeters. Fruit are developing red color which makes it easy to see the good crops for many farms in the area. Growers should protect against plum curculio and leaf spot. Leaf spot symptoms are easy to find in some orchards.

Plum fruit are 27 millimeters (Shiro) to 22 millimeters (Stanley) in diameter at SWMREC. Plum growers should protect against plum curculio and black knot. Black knot controls are needed until active shoot growth slows in early to mid-summer. Bacterial spot symptoms are causing small, water-soaked spots in leaves of some varieties, resulting in shot holes as the spots turn brown and drop out. Growers should check for signs of brown rot, which has been seen on green fruit in some orchards. 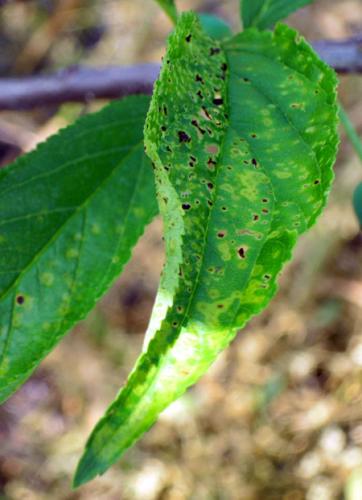 Apple fruit are 1.25 inches in diameter for ‘Golden Delicious’ to 1.75 inches for ‘Zestar’. Hand-thinning of fruit is being done where natural and chemical-induced drop was insufficient. Growers with a heavy crop should use NAA to enhance return bloom.

Fire blight symptoms have shown up in more orchards, but still are relatively scarce and isolated. Apple scab ascospore trap catch numbers have decreased to low numbers for the past few rains, indicating primary scab season is essentially over. In orchards with secondary scab lesions on the leaves, growers need to maintain protective sprays to prevent further spread of the disease. Cedar apple rust symptoms are also appearing.

Apples are also at risk of plum curculio and tarnished plant bugs. Overwintering obliquebanded leafroller larvae have been feeding on shoot tips and the trap catch of adults has started to increase, indicating the flight of the spring generation has started. Many growers are or will shortly apply their second sprays for the first generation of codling moth. Spotted tentiform leafminer mines are apparent.

Pears are approximately 1.2 inches in diameter. Growers should continue to protect against pear scab and scout for fire blight and pear psylla activity.

The Enviro-weather model is currently showing a grape berry moth model screen that dates from June 1 onward, and needs adjustment. Growers can get a closer idea of the expected onset of grape berry moths by accessing the box on the model page that is titled “Different wild grape bloom date?” Type in the observed biofix for wild grape bloom 50 percent clusters with 50 percent flowers open. You can get predicted dates for the start of egglaying and it will return when the beginning of first generation egglaying is expected.

Grape flea beetle larvae foliage feeding is causing little damage. No Japanese beetle adults have been observed in the vineyards we monitor. The bloom and post-bloom period is critical for disease control.

Phomopsis is common on foliage in vineyards that were not treated or received poor fungicide coverage. Keep developing fruit protected at least through bunch closure. This wet weather is favorable for black rot infections. More black rot is appearing now on leaves, particularly next to mummified berries from last year. Black rot infection requires six to seven hours of leaf wetness when temperatures are in the 70 to 80 degree range. Downy mildew needs three hours of leaf wetness at 70 F and two to three hours at 80 F. Powdery mildew is favored by high humidity and temperatures in the 68 to 81 F range. Consult the 2013 Michigan Fruit Management Guide (E154) for recommended grape fungicides.

Blueberries have large, green fruit and exposed fruit have a blue blush. Fruit set is generally heavy. Most irrigated fields have very good yields following the 2012 drought. Fruit set is lighter in fields that were not irrigated last year. Red leaves from cool weather are fading, but the cool weather has made virus symptoms very apparent. 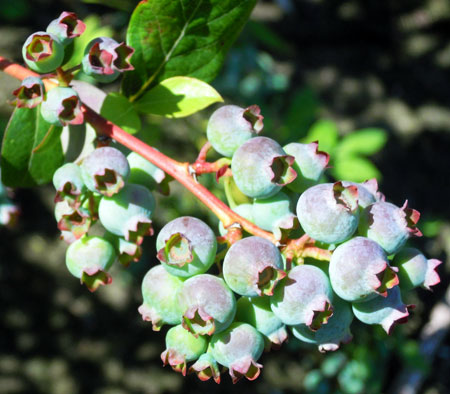 Symptoms of shoestring, mosaic, tomato ringspot, necrotic ringspot and other viruses are easy to find. Bronze leaf curl symptoms are also apparent. Growers have begun to call about sooty blotch on last year’s green stems. This black mold appears to grow on the waxy cuticle of the stem and does not appear to cause any damage. Michigan State University Extension does not recommend growers attempt to control this cosmetic disease. Shoots with a heavy fruit load have stopped growing, but young shoots without much fruit are still actively growing.

Growers have been applying sprays to control fruitworms and suppress fruit rots such as anthracnose and phomopsis. The Anthracnose Disease Prediction Model Handout posted at the Michigan Blueberry Facts website explains how to use the anthracnose prediction model on Enviro-weather. Note that the output for this model has the earliest rains at the top, so the most recent rains are at the bottom of the page. June 10 was an anthracnose infection period, but most recent rains have been too cool or too short. This should change as we warm up.

The final Monday fruit IPM meeting of the season is June 24 at Fruit Acres Farms at 5 p.m. These weekly meetings are good for one RUP credit.