Plants are ready to resume growth when warm temperatures return.

The winter of 2017, much like 2016, was mild compared to 2014 and 2015. Temperatures during the 2017 winter dropped to around zero degrees Fahrenheit at the end of a long December cold spell. This winter cold did not cause any damage.

Warm weather in February caused plants to start growing several weeks earlier than normal. First fruit bud swelling was detected in mid-February for apricots and other stone fruit. Southwest Michigan was far ahead of areas to the north where little bud movement occurred.

Warm periods in late February and early March pushed tree development in southwest Michigan ahead of normal. The first challenge to fruit buds came in early spring on the morning of March 14 when temperatures dropped into the low teens and single digits for areas of southwest Michigan away from Lake Michigan. Cold weather before this cold blast stopped bud development and certainly helped reduce damage. This event caused similar levels of damage to the East Coast and much more severe damage to southeastern United States. Areas to the north of us suffered no damage.

Temperatures for most of March have been cool with lows at or below freezing and only a few warm days. There has been little bud movement since early March. Most fruit crops are still in the swollen bud or bud burst stage and it would require cold temperatures below 20 F to damage the tree fruit flower buds. See “Freeze damage depends on tree fruit stage of development” from MSU Extension for more information. Recent rain has saturated the soils and made any fieldwork or spraying difficult.

Reports of significant damage to fruit crops in the eastern U.S. have given special importance to maintaining good management of the Michigan crop this year because of the prospects for higher prices. Growers have been applying oil sprays for control of San Jose scale and mites.

Apricot flowers are at red tip for some varieties. Normal apricot bloom in southwest Michigan is about April 15, but with a little bit of warm weather we should see bloom open before that. There was significant damage to apricot flower buds by low temperatures on March 14, especially away from Lake Michigan.

Peach and nectarine fruit buds are at green calyx to red calyx, with showy bloom varieties such as Loring and Fantasia ahead of non-showy types. Some peach varieties on higher sites closer to Lake Michigan showed about 10 percent fruit bud damage from the March 14 freeze event. Less favorable sites will likely have more damage. More assessments will determine the effects of the March 14 event.

Japanese plum fruit buds of early developing varieties such as Shiro are at late bud swell, with European plum fruit buds swelling only slightly. Damage from the March 14 low temperatures seems minor. A more effective examination is waiting for bud growth to resume. 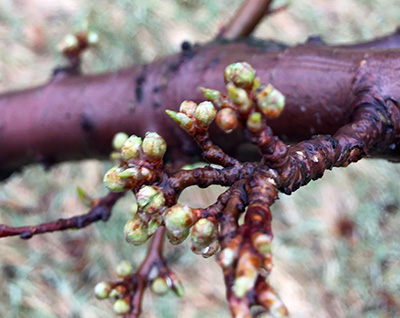 For the most part, apple flower buds were unaffected by the March 14 low temperatures. Early developing varieties such as Zestar, McIntosh and Gala are at 0.25-inch green, Golden Delicious at green tip and Red Delicious at silver tip, depending on the site.

The rain beginning late Friday night, March 24, was sufficient for a scab infection period by mid-Saturday. Scab ascospores were detected in low numbers during this rain event. This extended rain event made it difficult to apply fungicides until Monday morning. 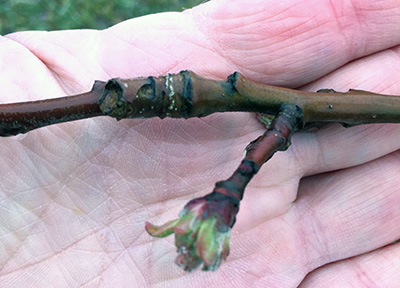 Pears fruit buds are at early bud swell, depending on the site and variety. Pear psylla adults should be flying.

Grapes have not yet begun growth. There was some concern during February, but the temperatures in March have been too cold to stimulate growth.

Blueberry flower buds are swollen. In early varieties, the buds are beginning to burst. Leaf buds do not appear swollen, but warmer weather will bring on growth, making them susceptible to mummy berry infections. Some growers have applied Sulforix and other lime sulfur products to suppress early season diseases.

Strawberries have greened up and new leaves are emerging from the crown. Over-wintering mulches should be removed and raked between the rows. Growers are looking at early-season herbicides to control overwintering weeds.

The Preseason Blueberry Kickoff meeting will be Thursday, March 30 from 1-5 p.m. at the MSU Trevor Nichols Research Center, 6237 124th Ave., Fennville, MI, 49408. Growers should register online. Registration at the door is available. The cost of the meeting is $10.

Southwest Michigan Horticultural Days will be live and in-person Feb. 2-3, 2022