Last week was cooler with highs in the 80s. A strong storm crossed the region early Friday morning, July 7, with high winds some rain and no significant hail. Damage was mainly from the high winds. Rainfall was variable and ranged from 0.2 to 0.4 inch of rain.

Another storm front moved through the area early Monday, July 10, with much more rain. Rainfall totals from Monday’s storm ranged from less than 0.5 inch to almost 2 inches.

For the week, most areas received between 0.5 inch and less than 1 inch of rain. Comparing this season’s rain across Enviroweather stations in southwest Michigan shows an average of 10 inches. Some sites have received only 5 inches while others received over 14 inches of rain. The potential evapotranspiration has been around 0.20 inch of water a day.

This week will begin humid with highs in the 80s and lows near 70. There is a good chance of thunderstorms Wednesday, July 12, with a cooler, drier weekend. Last week we accumulated 20 growing degree-days (GDD) base 42 every day and 14.7 GDD base 50. We continue to track over a week ahead of normal for heat accumulation for this date.

Japanese beetles continue to appear in more locations. San Jose scale crawlers are out but no damage seen on fruit. Brown marmorated stink bugs are still keeping a low profile in the area. The summer generation is still largely in the immature stage and not yet flying. Damage to crops is still very low. Growers can the Trevor Nichols Research Center's insect trap catches.

Peach and nectarine harvest has begun. Harvest of Desiree, Earlystar are Harrow Diamond are underway. Bird peck damage is a problem. The Michigan State University Enviroweather peach maturity model estimates the start of Redhaven peach harvest in central Berrien County on July 30, and Aug. 4 for the Allegan County area.

Oriental fruit moth trap catch has jumped in some orchards with the peak of the second oriental fruit moth flight. Egg hatch for the second-generation began approximately June 25, and larval damage to peach and apple fruit will be showing up soon. Stink bug and tarnished plant bug damage can increase fruit susceptibility to brown rot. 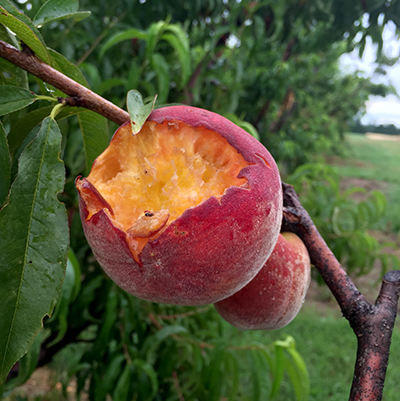 This peach has been partially eaten by birds. Ripening fruit are attractive to birds, providing food and water. Photo by Bill Shane, MSU Extension.

Cherry harvest is ending with late season sweet cherry varieties. Tart cherry harvest is winding down in Berrien and Van Buren counties. Wind whip damage and brown rot are the primary issues. There was some limb breakage and tree damage from recent storms as well as some wind whip to fruit still on the trees.

There is yellowing and leaf drop of older leaves due to cherry leaf spot infections in some orchards. Many growers applied insecticides to protect their fruit from spotted wing Drosophila (SWD).

Plums range from 1.25 to 1.5 inches in diameter. The area plum crop ranges from poor to fair. Early plums are coloring. Self-thinning of fruit is continuing for some blocks. Protect fruit from brown rot and SWD.

Apples range from 1.5 (Gala) to 2.5 (Zestar) inches in diameter. Sooty blotch and flyspeck management is needed as rains wash off fungicide coverage. The Enviroweather sooty blotch and flyspeck model predicts symptoms of these diseases should be appearing on unprotected fruit. Recent winds and rain may spread fire blight in orchards with succulent growth and a history of the disease.

Grape berries are sizing rapidly. Concord and Niagara are at berry touch. Clusters on secondary shoots in frost-damaged vineyards are catching up. Downy mildew and powdery mildew incidence is low. The fruit cluster rachises of all varieties are still vulnerable to infection by downy mildew. V. vinifera berries are still vulnerable to black rot. Otherwise, clusters are now are resistant to new infection of fungal disease until veraison. 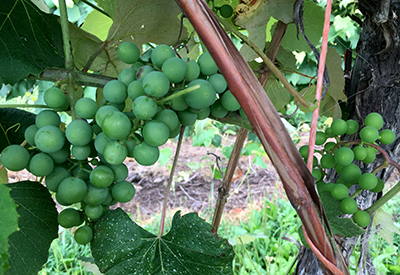 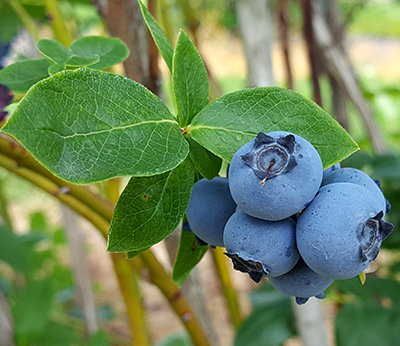 Bramble harvest continues with black and red raspberries. Black raspberry harvest is winding down. Summer red raspberry will continue for several weeks. Protect fruit from SWD. Raspberries and blackberries are a favorite host for SWD and control is difficult. See the MSU recommendations for SWD control in brambles

Clean Sweep Pesticide Disposal in Berrien County on Wednesday, July 26, is for pesticide materials that have expired, are no longer registered, of unknown content, or otherwise need disposal. Participants must register by July 12 (two weeks before the event) to take advantage and disposal of unwanted pesticides. They are going to open early so Viticulture Field Day attendees can also take advantage of this opportunity. Fill out the registration form or call Jill Adams at 269-983-7111 ext. 8234.

The 28th Annual Viticulture Field Day and Steak Cookout is Wednesday, July 26, at the Southwest Michigan Research and Extension Center. This well-attended, educational event is hosted by the Michigan Grape Society and Michigan State University Extension. Register before July 14 for the early-bird rate.