Last week was warm with highs in the lower 80s. Storms crossed the region early Monday morning, July 10. A front moved through the area Wednesday, July 12, with more rain. Rainfall totals for the week ranged from less than 2 to over 3.5 inches of rain. All this rain has relieved drought concerns. Soils are generally wet.

Comparing this season’s rain across southwest Michigan shows an average of almost 12 inches. Some sites have received only 7.5 inches while others have received over 14 inches of rain.

Last week, potential evapotranspiration was less than 0.15 inch of water per day. This week will be warmer with highs in the humid upper 80s and lows near 70. There is a good chance of rain later in the week.

Last week, we accumulated 30 growing degree-days (GDD) base 42 every day and 21 GDD base 50. We continue to track over a week ahead of normal for heat accumulation and crop harvests for this date.

Japanese beetles continue to appear in more locations. Red spots are showing up on fruit due to San Jose scale infestations. Brown marmorated stink bugs are still keeping a low profile in the area. The summer generation are still nymphs and not yet flying. Damage to crops is still very low. Growers can review the insect trap catch at Trevor Nichols Research Center. Young plantings on sandy sites may need irrigation again soon. Leaf samples for foliar tissue analysis should be collected from mid-July to mid-August.

Oriental fruit moth trap catch is up and down. We are in the second oriental fruit moth flight and egg hatch for the second-generation began about June 25. Damage to peach and apple fruit will be showing up soon. Stink bug and tarnished plant bug damage can increase fruit susceptibility to brown rot. As fruit begins to color, the need for brown rot protection increases. Rotate classes of fungicides used for brown rot control to avoid resistance problems. 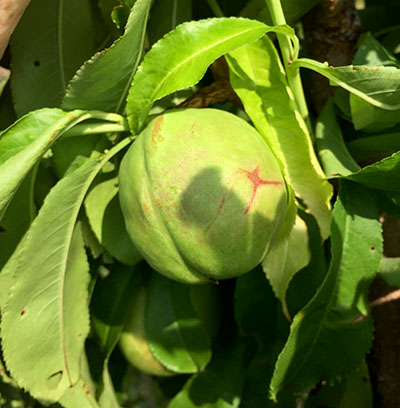 Grape leafhopper and potato leafhopper numbers are increasing in some vineyards. Most growers applied controls for second-generation grape berry moth in early July 2-3. In wine grapes, leaf removal, tucking and other canopy management tactics are continuing.

Blueberry harvest is in full swing with the second pickings of early varieties and the first picking of Bluecrop. Hand harvest and machine harvest are moving quickly. Fruit quality is excellent, but size is small in some fields where the number of berries is high and the number of leaves is low. Harvest was delayed by Wednesday’s and Thursday’s rain.

In the last few weeks, SWD numbers have jumped from single to double digits and a few traps have caught more than 100. It looks like the dramatic increase in SWD numbers we see at the end of July has begun early. There are many wild berries this year. Abundant hosts allow SWD populations to build to high numbers outside berry fields. Protecting ripen fruit becomes harder and harder as the number of SWD increase.

Tight spray schedules are needed to control SWD. Tight harvest schedules will reduce the amount of time berries are exposed to SWD. The longer ripe fruit stays in the field, the more likely it is to be attacked by SWD. Do not neglect fungicides.

Very few fruit rots such as anthracnose and Alternaria have been reported. Phomopsis canker and cane collapse is apparent in some fields. This does not appear to be a bad year for phomopsis. In the next month, collect leaf samples for foliar tissue analysis. Foliar analysis give a much better picture of the nutrition in the plant. Soil sample reveal what is in the soil but not what the plant needs to optimize growth and yields. 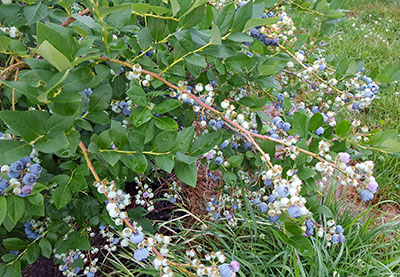 The 28th Annual Viticulture Field Day and Steak Cookout is Wednesday, July 26 at the Southwest Michigan Research and Extension Center. The event is hosted by the Michigan Grape Society and Michigan State University Extension.

An open house at the Southwest Michigan Research and Extension Center is Tuesday, Aug. 15, from 1 to 4:30 p.m. Project tours of vegetable, tree fruit, bramble and blueberry research will be available. There is no charge for admission, but please pre-register.