State of the Program: Look how far we've come

Landscape Architecture has played a role in education at the University since the very beginning.

In 1947, Landscape Architecture expanded its offerings to include a four-year degree in Urban Planning, and moved to the old Quonset huts, located where Wells Hall stands now. Alumnus Ken Polakowski (class of 1956) “spent all four years in the ‘huts’ that were located just over the bridge to south campus…neighbors to the LA program were the Studio Art and Civil Engineering huts; both required classes.”

There, he recalls that “no student was assigned a permanent drafting table and there were no lockers for storing equipment. The building was closed at
night so all ‘charrettes’ occurred in the students’ private ‘digs’. You carried your equipment in a small tackle box and had a drafting board in your room.”

He also recalls a large graphic hanging over the front door with a quote from Daniel Burnham, “Make no little plans, for they have no power to stir men’s minds.”

Don Fox (class of 1967) still uses his LA tackle box repurposed for transporting his fishing tackle. In 1966, the department moved into the Urban Planning and Landscape Architecture building or UPLA building.

Alumnus Christy Summers (class of 1993) recalls “the building and studio space being very spartan, but reflects on the great camaraderie of the classmates, despite the physical environment”.

Alumnus Don Stefanko (class of 2012) recalls that it was a place where the students felt a sense of ownership – students had personal lockers, brought in furniture for late-night breaks, and decorated the walls with art and memories. It was more than a studio – it was a place to call home. 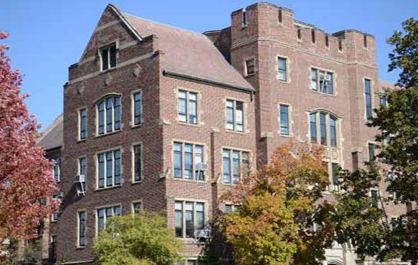 Now students can look out of the south window to the pastoral setting of north campus and out of the north window to the contrasting hustle and bustle commercial strip along Grand River Avenue that we all frequented on occasion. Students find the new location to be useful when juggling deadlines.

Current student Marlena Smith (class of 2015) remarks that since students spend the majority of the day in studio, having access to the food options at the Union and along Grand River are especially convenient. It’s easy to grab a quick grilled cheese special at the Dairy Store or toss a Frisbee in the lawn between classes when the studios are located in the heart of campus.

In 2008, the Landscape Architecture program moved to its new home on the third floor of the Human Ecology building located right at the threshold
between campus and the East Lansing community. The new studios feature large windows providing lots of natural light and folding partitions that allow for collaboration between multiple classes or hosting large graphic workshops.

Graphic artists such as Michael Doyle and James Richards have been the focus of the last two Biennial Big Ten Graphic Workshops – each studio accommodates around 100 students with the ability to view the artists’ work up-close on video projectors. The studios are equipped to host both lecture and studio classes for added flexibility.

Just across the hall, students can produce digital graphics using state-of-the-art software in a computer lab that is shared by students in SPDC. Late into the night, students collaborate on the white board, scan drawings, work in AutoCAD, produce 3-D models or sketch directly on the touch-sensitive
computer screens, all to the sound of inspiring music.

The new location affords opportunities for engagement with other students and the community. At least once a year, a studio class creates an outdoor installation of art in the landscape on the front lawn of the Human Ecology Building. Seen by many passing by these installations provide visibility of the landscape architecture program to the campus and its visitors.

Within SPDC, landscape architecture students have opportunities to collaborate with students in construction management, interior design, and urban
and regional planning, both in classes and after hours in the studio.