The days of assuming natural resources can be swapped in and out to solve shortages – corn for oil, soy for beef – may be over. An international group of scientists demonstrate that many key resources have peaked in productivity, pointing to the sobering conclusion that “renewable” is not synonymous with “unlimited.”

Scientists from Michigan State University (MSU), the Helmholtz Centre for Environmental Research (UFZ) in Germany and Yale University analyzed the production and extraction rates of 27 global renewable and non-renewable resources. They examined 20 renewable resources, such as corn, rice, wheat or soy, which represent around 45 percent of the global calorie intake according to the Food and Agriculture Organization of the United Nations, as well as animal products, such as fish, meat, milk and eggs.

The annual growth rate of 18 of these renewable resources – for example, increase in meat production or fish 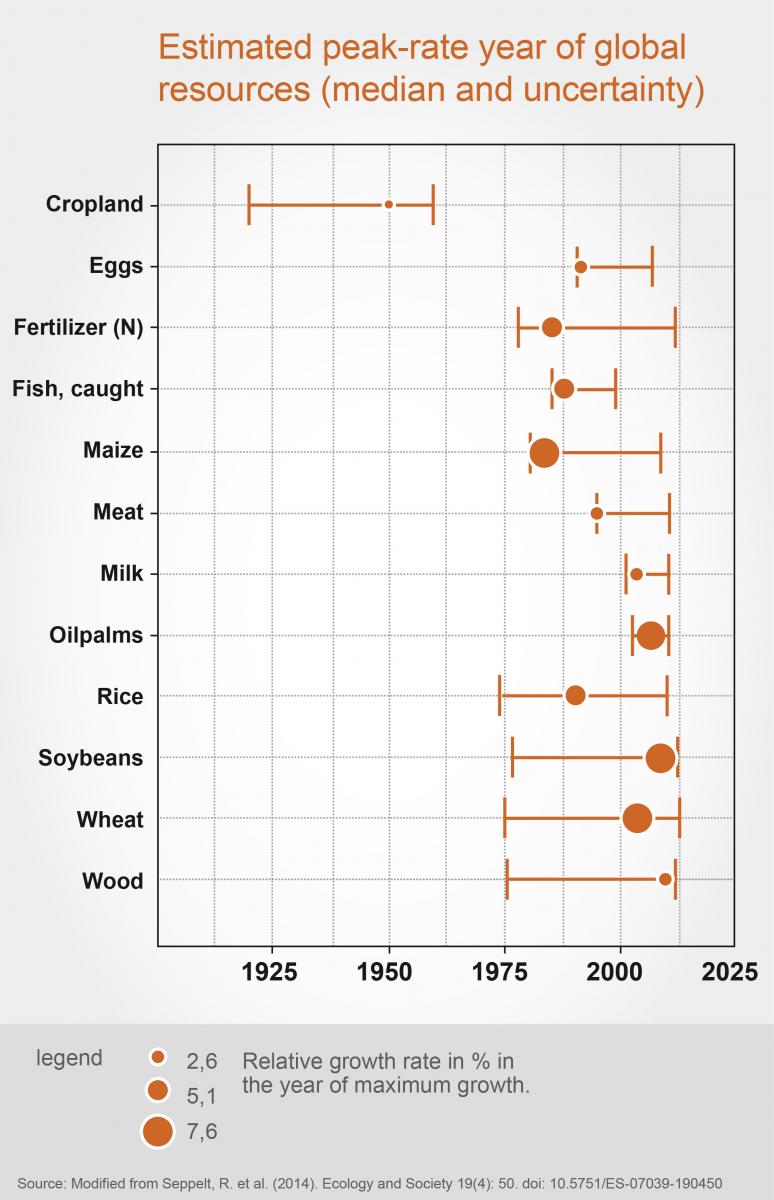 The results were published in the latest issue of the international journal Ecology and Society, and featured in the journal Nature’s Research Highlights this week.

For Jianguo “Jack” Liu, who is director of MSU’s Center for Systems Integration and Sustainability, this is strong reason for integration -- to approach sustainability problems holistically, rather than searching for a “one for one” substitution to offset shortages.

“People often talk about substitution. If we run out of one resource, we just substitute another. But if multiple resources are running out, we’ve got a problem,” Liu said.

The researchers used a global dataset and made limited assumptions, relying on computer power to extract pattern from the database.

Surprisingly, they discovered not only that 20 resources had a peak-year but also that for 16 of the 20
resources with a peak year, the peak year lay between 1988 and 2008 -- a narrow range in the history of mankind.

"The key commodities that a person needs for food and must harvest are limited", said Seppelt, who leads the UFZ Landscape Ecology Department.

Renewable resources become scarcer. The authors were able to illustrate this using various examples: The
maximum global growth rate in crop yields for soybeans was in 2009, for milk it was 2004, for eggs it was 1993 and for the fish caught it was 1988. Data from other studies confirm these results. For example, the crop yield per area with corn, wheat, soy and rice on more than a quarter of the farming area around the world is stagnating or decreasing, according to the U.S. scientists.

There are several reasons why many of the peak years occurred during the same time period or “synchronized,” Liu said.

"Experts see opportunities for further increases in agricultural yield of about one to two percent per year due to better breeding techniques and genetically modified organisms,” Seppelt said. "Mankind needs to accept that renewable raw materials are also reaching their yield limits worldwide".

Liu said this does not speak to hopelessness. Rather, it’s a call to not be simplistic when seeking solutions and to acknowledge that all resources come with costs, and that the costs may not be immediately obvious, and span the globe.

“The world is now tightly telecoupled,” Liu said “To produce one thing you need multiple resources often at distances, and we ignore that at our peril.”

Liu’s portion of the research was supported by the National Science Foundation and Michigan State University AgBioResearch.