The Policy Project Interacts with the Media in the Delta State

Updated from an original article written by Oyinkan Tasie.

What is the role of the Media in strengthening the Agricultural Policy Process in the Delta State? 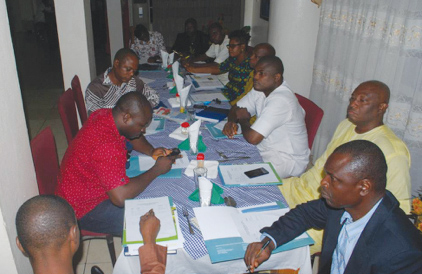 On June 28, 2017, the Feed the Future Nigeria Agricultural Policy Project held an interactive session with the Media in the Delta State. Twenty one journalists from 17 Media Houses in Delta State attended the session. In addition to representatives from radio (4), television (5) and print media (11), the Public Relations Officer and other staff of the State Ministry of Agriculture and Natural Resources including the Director, Planning Research and Statistics also attended. Three of the 20 Journalists were also Newspaper Publishers.

Reaping the Benefit of the Visiting Scholar Program of the Nigeria Agricultural Policy Project: Training on R Statistical Software

"Train One to Train Others": Project Scholars Train Nigerian Faculty on Using "R" for Data Analysis

The Project Scholar Program: A Rare Privilege and Wonderful Experience Worth Sharing.