It rained most of Monday through Wednesday, and the temperatures were in the 50s–a normal grey spring in Michigan as April showers give way to the promise of May flowers. The first bicycle tour was scheduled for Thursday, May 5th at three o’clock, and we were worried that it would be a bust due to the wet and cold weather.

Lo and behold, on Thursday the sun appeared and the temperatures were forecast well into the mid-60s. Those temperatures were perfect for a RIDE, especially a first RIDE, a RIDE designed to celebrate spring and landscape architecture, even though we just missed LA month in April, otherwise known as LAM. This first ride inaugurated the “LA RIDE,” sponsored by the Michigan Association of Landscape Architects (MASLA) 2016.

A small crowd gathered at the Eli and Edythe Broad Art Museum on the campus of Michigan State University in downtown East Lansing. We chose “The Broad” because it is a world class exhibit that is easy to find, and it was the site of the first MSU Landscape Architecture Alumni and Advisory Board (LAAAB) speaker series. We thought it would be a great way to recognize both organizations and to attract existing and new members as well as students, faculty and allied professionals.

We had no idea who would show up for a bicycle ride like this, since our advertising was mostly by word of mouth, the Michigan ASLA website, and the School of Planning and Design website. We also scheduled it during finals week, which may not have been too smart since most students were getting ready to leave or had already left campus for the summer. Our goal was to test it out and to see if there was interest: an experiment of sorts. We hoped to have a dozen people show up and maybe half of them to ride. We had no clue what was to happen next.

Our efforts were certainly not in vain— we attracted 45 people. Everybody’s spirits lifted as people gradually filtered onto the plaza to meet friends and make acquaintances. We had a nice selection of music playing, some light refreshments, and a delightfully diverse group of people who were curious, energetic, and willing to participate. Our group was evenly bracketed with ages ranging from 17 to 68. Most all were ready to ride!

Karen Russcher, MSU landscape architecture instructor, agreed to be our local school representative. In a green and white riding outfit, she led our group from the Broad Art Museum through Benefactors Plaza to the MSU Bicycle Center for some impromptu safety instructions from director Tim Potter. From there, we were off to the Lansing River Trail and officially on the First LA RIDE ever! It was exhilarating to know that this was actually happening after months of planning! It was a relief to know that it was becoming a thing!

The LA RIDE had a feeling of authenticity, camaraderie, and an inner sense of belonging to something special. It was a cool thing we were doing and we knew it. This was a collection of people young and old, women and men, with thirst for knowledge all the while huffing and puffing as we rode the trail through woods, meadows, and wetlands of the Grand River and Red Cedar watershed. 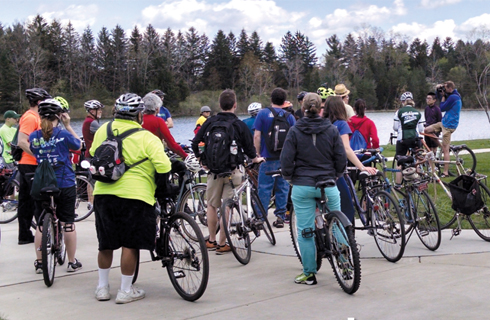 Our first stop was Crego Park. Richard Schaefer, landscape architect with the City of Lansing, gave a brief description of the rehabilitated toxic waste site that was transformed into a beautiful park with a large pond, new walkways, sandy shorelines, and docks designed for fishing, wading, and paddling within 200 acres of woodlands right in the center of the city.

From there, we rode to Mt. Hope Cemetery, where Loretta Stanaway, cemetery caretaker and historian, gave a brief lecture. She told us the stories of the past legends who built Lansing, such as R.E. Olds, Potter, Ranney, Cahill, and many others. Some people said they had driven by that cemetery a thousand times but never stopped to see the granite sculpted tombstones, sunken columbarium, or the gracefully meandering service roads (which were, by the way, perfect for a peaceful bicycle ride). The talk was captivating and tranquil, and it was inspiring to learn of the deeds that these men and women performed in building their city during the early to mid 1900s.

We rode onward to Hawk Island County Park, operated by Ingham County in the heart of Lansing. We stopped at the bottom of the newest addition to the 180- acre park, “the urban snow park.” A brief presentation on the history, design, and operations for the park was given by Robert Moore, previous Ingham County Park Director; Aaron Senchuk, LA student and snow hill digger; and myself, LA designer for the Hawk Island Master Plan and construction plan for the Snow Hill.

Afterward, the LA RIDE met at the Red Tail Hawk Shelter for refreshments as the speakers gave the development history of Hawk Island Park, an abandoned gravel pit that has been reclaimed and remade into a regional destination.

Next we rode to Hunter Park, an urban agricultural neighborhood food producer. Rita O’Brien, Director of Hunter Park Garden House, provided a guided tour of the hoop house, compost center, free pick-your-own open garden plots, and of course the neighborhood gardens. We learned how the community works together to supply food to themselves, the local farmers market, and to people of less fortunate means. While we were there, two MSU students volunteered to learn more about gardening and to work in the gardens.

About 100 yards away from the gardens, President of the MSU/Lansing Bike Polo Club Eddie Glayzer provided us an understanding of what “guerilla recreation” looks like up close by demonstrating their craft on one of the abandoned tennis courts. This group finds abandoned or underutilized hard surfaces, usually within parks, and transforms them into a hockey games on bicycles during the spring, summer and fall. They have a blast doing it.

On this first first LA RIDE, I overheard someone say “this is like education in motion,” and it was exactly that. Our post-opinion survey proved that point specifically with an overwhelming majority (95%) stating that they would participate again, and that they loved the educational component, the exercise, and meeting old friends and developing new ones they met on the ride.

Our new goal is to improve, by reaching out to more: LAs, students, related professionals, and others.

After we had a beverage and dinner together, we decided to take the LA RIDE to Grand Rapids for the 2016 MASLA conference. This is the first ride offering three continuing education credits. Consider joining us for a RIDE to remember next year in Detroit!