The 100th anniversary of the Great Storm of 1913 recalls the greatest maritime disaster ever to befall the Great Lakes.

Hurricane Katrina.  Super Storm Sandy.  We all know about these storms, but do you know about the Great Storm of 1913? On November 10, 2013 a ceremony was held at the Dossin Great Lakes Museum in Detroit to commemorate the 250 sailors lost in a storm that raged over the lakes one hundred years ago – November 7-12, 1913 – the Great Storm of 1913. As a ship’s bell rang in the Dossin’s Great Hall, names of the 12 ships sunk and the number of crewmen lost from each were 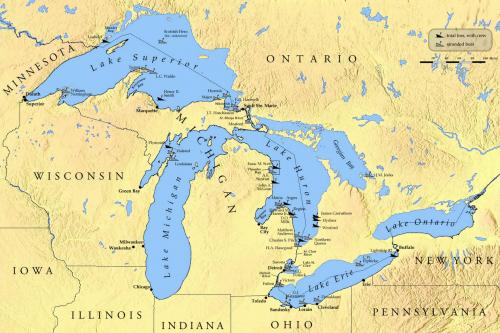 announced. The ceremony culminated with the laying of a wreath on the river amidst an Honor Guard flotilla of vessels. This was one of several events held in communities throughout Michigan, other Great Lakes states and Ontario on the centennial of what is said to be the worst storm to ever hit the Great Lakes.

The storm was a combination of two of the worst meteorological phenomena: a blizzard and a hurricane. The storm is often referred to as the “White Hurricane.” Ships on the Great Lakes sailed into waves more than 35 feet in height, sustained winds above 60 miles per hours with gusts topping 90, and whiteout conditions. Captains reported that their ships were thrown backward while at full power. On land, blizzard conditions prevailed. Cleveland had two feet of snow, cities from Marquette to Buffalo were shut down, with severed telephone and telegraph links further impeding rescue efforts. Days passed before the devastating impacts of the storm became known. 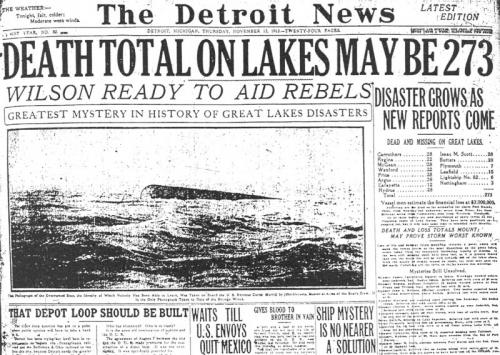 Ships were sunk on all the Great Lakes except Ontario. Twelve went down with all hands, eight of them on Lake Huron, two on Superior, and one each on Michigan and Erie. Four of the twelve have never been found. An estimated 31 additional ships were blown onto shoals and their crewmembers forced to endure the storm’s fury before being rescued. Today, many of these ships lie within the bounds of Michigan’s Bottomland Preserves, which coastal communities developed with assistance from Michigan Sea Grant and Michigan State University Extension.

Analysis of weather data from November 1913 shows that this storm was created by the meeting of two distinct systems. The first was a typical “Alberta Clipper” sweeping across the plains and the upper lakes from the Canadian north. The second system of low pressure moving from south to north along the U.S. eastern seaboard turned 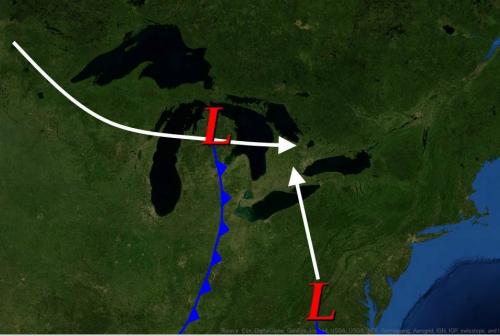 inland toward the Great Lakes instead of heading toward the Atlantic Ocean as it normally would. Weather reporting technology at the time was not sophisticated enough to predict what the intersection of these two systems would mean to the Great Lakes region. When the second system stalled over Ontario, chaos began to unfold and the time for warning was past.

Over the past century, although nature continues to brew perfect storms, NOAA’s National Weather Service has made great strides in development of technologies capable of giving us time to get out of harm’s way in both maritime and land-based settings. The Great Storm of 1913 was the catalyst for many of these improvements. These developments, and the science behind them and the Great Storm of 1913, will be the focus of Part 2 of this article series.