There are multiple ways to style a zoning ordinance

Zoning can be written, or prepared, several different ways. Most common is to think of zoning as traditional, conventional, performance-based, form-based or a mix of each of these.

Traditional zoning is also known as pyramid or Euclid zoning, named for the U.S. Supreme Court case Village of Euclid (Ohio) v. Ambler Realty Company, where zoning was upheld as a valid government police power. In traditional zoning, each zoning district builds on the previous one. For example, an R-1 Residential may allow dwellings and duplexes. The R-2 Residential allows everything in R-1 plus apartment buildings. The C-1 Commercial district allows everything in R-2 plus retail and service establishments, and so on. One might illustrate this with a pyramid, with R-1 at the top, and under it, slightly larger, is R-2, and then C-1 forming the wide base. Largely fallen out of use, this type of zoning is not seen much anymore.

Conventional zoning, by far the most common type of zoning found in Michigan, divides communities into separate exclusive zoning districts. A major characteristic s the segregation of land uses into separate areas. This type of zoning results in neighborhoods (development or subdivisions) without a mix of commercial or other land uses, and may result in neighborhoods with all dwellings built for a single income bracket. More recently, this type of zoning has been modified to allow a mix of uses (especially in commercial areas) and to include a very small number with some form-based zoning elements.

Performance-based zoning focuses more on the impact of a land use rather than the actual use. For example, a residential district may allow any type of land use when the external impact of that use is basically the same as the typical use for that district. Therefore, if a person wants to open a corner store, that store must meet the zoning ordinance set of standards. If the store meets the standards, indicating the store’s impacts are the same as those of a 10-unit apartment building (traffic generated, amount of sewage, noise or other impacts), then the store will be permitted. The formula and system for measuring impacts can be complex but effective if done right. Very few communities in Michigan use this exclusively.

Form-based zoning focuses more on the form of the activity rather than the land use. This type of zoning emphasizes the form of the building and its relation to the public realm (street, park, etc.) It allows for broad and general land use. However, the outline of the built-form of buildings, parks and streets has priority. This type of zoning plan includes many drawings and illustrations, relying on illustrating the regulations with minor use of annotations. Form-based zoning is particularly effective in urban settings (but likely can also be applied in a rural setting) and for adoptive re-use of buildings, faster approval processes, placemaking, and so on. Form-based zoning is still new for Michigan, but it has been put into practice in about two dozen communities in the state. 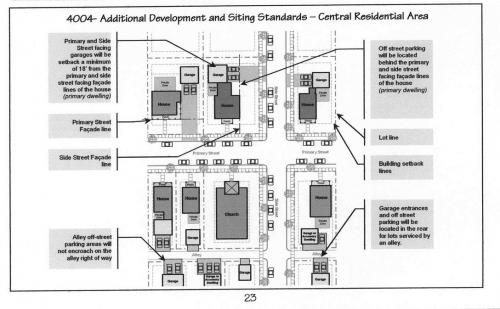 Michigan State University Extension government and public policy educators can provide training and technical assistance for these zoning types and for planning and zoning generally.

Do you require training for your zoning administrator? You should

Court clarification on Right to Farm and local regulation