Farming has always been difficult. However, through technological advances, we can plant crops, apply precise synthetic fertilizers and harvest with ease. Yet even as uncertainty over supply has been reduced, market demand is more volatile than ever.

“You used to be able to make it as a farmer with a strong back and a weak mind. But nowadays, you can make it with a weak back and a strong mind.” – Illinois farmer #3

Farming has always been difficult. Weather is unpredictable and markets are volatile. Farming used to rely on human and livestock labor to plow, plant, tend and harvest crops. However, through technological advances, we can easily plant crops, apply synthetic fertilizers in precise amounts and harvest. Through genetic modification, crops are designed to resist pest outbreaks and produce under extreme conditions like droughts and floods. Infrastructure investments such as irrigation and drainage tiles mitigate extreme events and help manage water resources.

Yet even as uncertainty over supply has been reduced, market demand is more volatile than ever.

While conducting farm interviews in Illinois, I started by asking “What about farming has changed during your life time?” No surprise, technological advances topped the list. But a pattern emerged as more and more farmers responded with “market volatility”.

Several Illinois farmers explained that a 2-cent change in crop price in the past would have sent the market into a frenzy. However, today changes of 20 cents before lunch are considered normal. Market volatility has become such a problem that there are limits on how much crop prices can change in a day (40 cents for corn and $1.15 for soybeans).

So why are the corn and soybean markets so volatile? 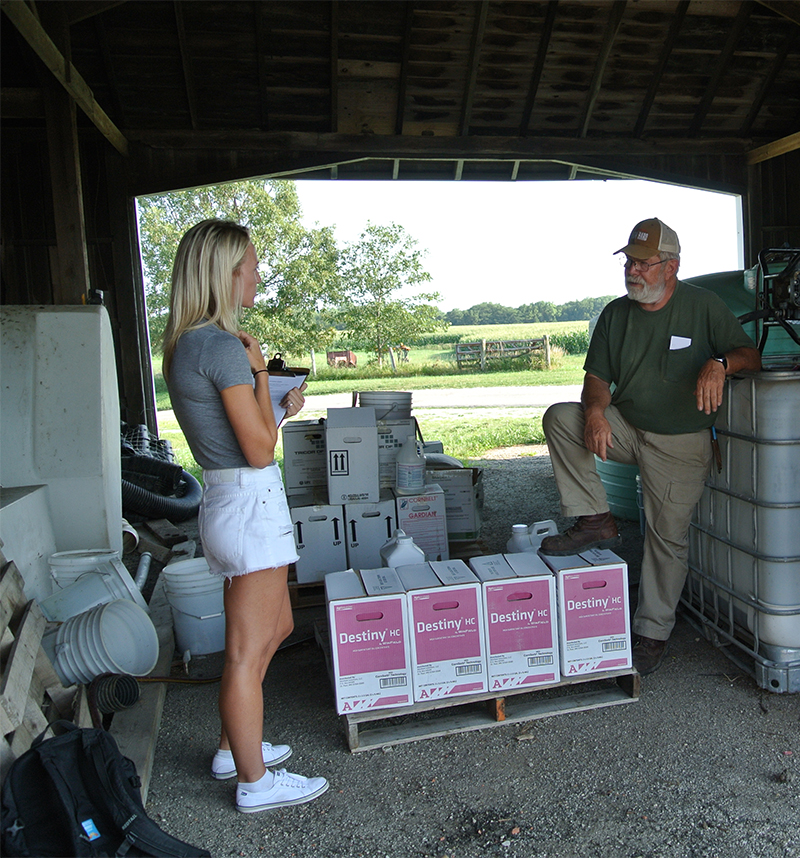 Since the consolidation of the livestock industry, many farmers have been forced to sell their livestock operations and subsequently reduce the need for feed crops like wheat and alfalfa. Resources that once supported livestock production have been reallocated to produce corn and soybeans, thus reducing farm diversity and increasing dependence on corn and soybeans for profit. In other words, farmers began putting all their eggs in two baskets. As technology continued to increase production, the supply has kept up with and sometimes surpassed the demand for corn and soybeans.

Now, farmers rely on politicians and lobby groups to secure access to stable markets and find new ones.

Domestic ethanol mandates created, and trade with Mexico has supported, corn expansion while the demand from China steadily supports the soybean market. This large and concentrated demand driven by international trade is unprecedented – China purchases over half of U.S. soybean exports.  Further, the U.S. isn’t the only country dependent on China’s insatiable soybean demand. Brazil holds the biggest market share and many other South American countries are gearing production toward China’s demand.

When it comes to politics the most important thing to a farmer is support for agriculture -- limited environmental regulations, subsidized crop insurance and domestic mandates. But foremost: farmers do not want politics to interfere with their access to global markets.

President Trump has discussed altering trade relationships with both Mexico (the U.S.’s #1 corn market) and China (the U.S. #1 soybean market). Regardless of the impact, as president of the United States, his words still affect the market. Several farmers mentioned that government reports and announcements are used by speculators -- outside investors who make money from fluctuations in the futures market -- to inform their buying or selling decisions.

There is no question that global trade has benefited the American farmer. As technological advances boosted production by limiting damage caused by extreme weather events, international markets hungrily gobbled up the U.S. growing crop supply. At the same time the back-breaking labor of farming has gotten easier, global trade has amplified risk and changed the skillset required to be successful. In addition to local conditions, farmers must make informed decisions based on weather patterns and government policies in areas far far away from the Midwest’s amber waves of grain.

Unlike natural disasters which have spurred the development of drought- or flood-resistant crops, the U.S. farmers’ dependency on foreign markets cannot be solved through technological advances. This is the new drought. This is the new flood. Furthermore, this man-made disaster places farmers in the vulnerable position of relying on the U.S. government to fight for their best interests.

A farmer’s most important tool in the past may have been the plow, but for the farmers of today, it is the pen.

ECOLOGY AND SOCIETY - Network analysis as a tool for quantifying the dynamics of metacoupled systems: an example using global soybean trade

ECOLOGY AND SOCIETY -- Multiple telecouplings and their complex interrelationships