Houghton County 4-H member shares her passions for making her community and world a better place through her remarkable leadership and civic engagement endeavors.

Part 1 of this news article introduced Houghton County 4-H member Ganna Omar and highlighted some of the ways she is engaged as a leader in her community. Part 2 of this three-part series explores the ways Omar and her group of local teens have been working to change the world for the better.

Omar thinks gender equality is one of many important social issues that she and other youth should be engaged in helping to achieve in the world. “I believe it is everybody’s goal as humans to live in a world that is peaceful,” said Omar. “People don’t realize that in order to achieve peace, there must be justice. This means that we cannot stop fighting for what is right until not only women are given the same opportunities as men, but until Native Americans are treated with respect; until systematic racism is eliminated from our societies and every innocent person of color feels safe; until no one is treated with inferiority to someone else because of the color of their skin, their religion, their sexuality or their gender identity.”

The Houghton Keweenaw Girl Up chapter, as well as other chapters around Michigan and world, focus on three main topics as they are related to gender inequality: education, healthcare and domestic abuse. According to Omar, Girl Up members employ three primary methods for creating positive change on these topics: awareness, advocacy and fundraising. At the local level, Omar’s group has been busy raising awareness of gender inequality, and raising funds to help support the education of girls in other parts of the world.

Houghton Keweenaw Girl Up members planned and organized the screening of the movie “Me Named Me Malala”, which tells the story of Nobel Peace Prize winner Malala Yousafzai. The group partnered with students from Michigan Technological University to screen the movie on the university’s campus and promoted the event through local schools, radio, newspapers and fliers. The event raised hundreds of dollars to support their cause, and according to Omar, had a valuable impact on the group and their larger local community.

“Screening the movie allowed for us to not only raise awareness of the kind of things that happened to women in the developing world, but also to start a conversation in our community about what this meant we had to do,” said Omar.

Omar’s engagement in Girl Up has also provided her with the opportunity to learn and practice advocacy and civic engagement skills at the national level. Omar traveled to Washington, D.C. and joined other Girl Up members to lobby elected officials and ask them to support two bills addressing education. 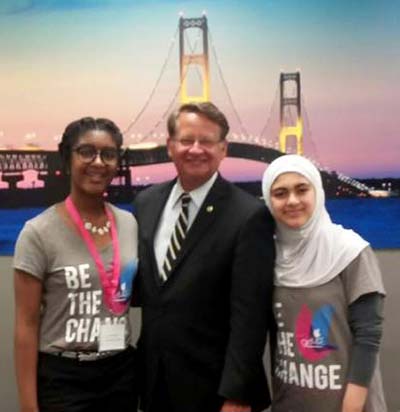 “I was part of a group that met with Representatives and Senators from Michigan, Indiana and Ohio,” said Omar. “We were given 30 minutes to talk to each of them, meaning we were lobbying for 4.5 hours total. We’d go in and each girl would take a turn presenting part of our case, and finally one girl would make the big proposal, which was asking them to vote on the Education for All and Education for Refugees bills.”

While her meetings with these officials were very positive, Omar says one of her biggest takeaways from the experience was that “talking to members of Congress requires a layer of toughness; some of them are really harsh.”

Omar also shared other significant things she learned from the experience. “If you ask them for a picture, they are more likely to like you. Beyond that, I learned how to stride into meetings with confidence and declare what my definitive goals is, even when I was meeting with people who are opposed to it.” 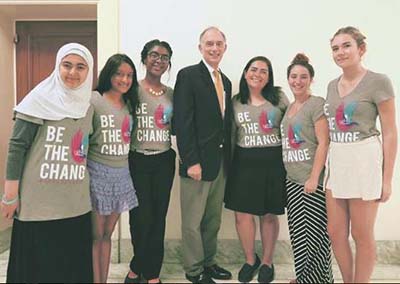 To learn about what Omar and the Houghton Keweenaw Girl Up group members are planning for the future, continue reading Part 3 of this news article.