In this series, we’re exploring trace contaminants and residues. In this post, we’ll take a look at water and the guidelines and regulations that keep our water safe.

What is a trace contaminant or residue?

Is water quality monitored and regulated in the U.S.?

Yes, the U.S. Environmental Protection Agency (EPA) works with state and tribal governments to set water quality standards. Numerous standards in place cover many water uses, such as animal feeding operations, mining, and more. In this post, we will focus on drinking water standards.

For public drinking water, the EPA sets minimum health-related standards that all states and tribal governments must meet or exceed, then states can add additional controls and regulations. These standards are monitored by state and local agencies that report to the EPA.

The EPA does not regulate privately owned and operated well-water operations. However, the EPA provides information on proper well-water testing so owners can ensure their well-water remains safe for use.

No, however, the World Health Organization (WHO) works closely with scientists and researchers to create drinking water quality standards applicable to the more diverse global water supply.

It’s essential to keep in mind that drinking water quality standards in the U.S. are much higher than global standards.

Are there trace contaminants or residues in water?

Water can contain natural and synthetic trace contaminants caused by a variety of natural or human-influenced occurrences. There are four key water contaminant categories recognized by the EPA:

How does the EPA determine safety thresholds?

U.S. law requires the EPA to perform in-depth risk assessments and use the best available peer-reviewed science to develop drinking water safety standards. Scientists and policymakers then review these standards every six years to keep regulations on par with the current knowledge.

Remember, regulators set safety thresholds intentionally low to help prevent contaminated water from harming our most vulnerable populations. The EPA currently has limits set for 90 common contaminants, and they are reviewing other possible contaminates for further regulation.

How are contaminants measured in water?

The EPA currently has thresholds set for 90 common contaminants and are reviewing other potential contaminants. 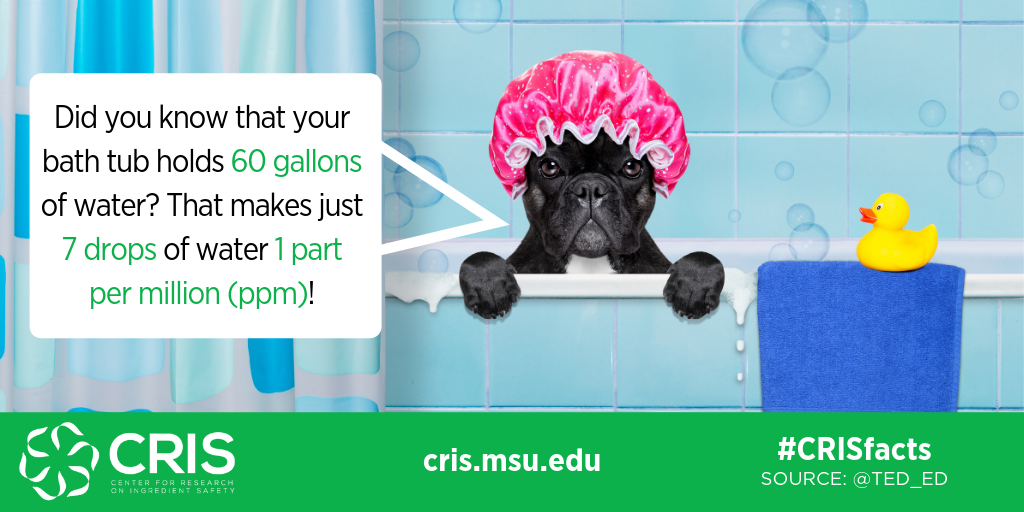 Ted Ed put together a fantastic video helping to explain parts per million.

When we talk about parts per billion (ppb) or parts per trillion (ppt), it’s an even smaller number. While billion or trillion sounds like it would be a larger quantity, it’s a much small quantity by a much larger magnitude.

Does all water contain the maximum allowed amount of a trace contaminant?

No, water contaminants vary by region. Some regions may have more copper in the water, while other areas may have more nitrates depending on a multitude of factors.

Anyone from the general public can view their local drinking water reports, and the EPA outlines how to perform water testing to see what contaminants, if any, are in the water (1,2,3).

As we know, the mere presence of a contaminant doesn’t necessarily cause harm; the dose makes the poison. We also know that across the U.S., the highest threshold allowed is just that, the highest allowed, it does not represent that actual levels found in public drinking water, which will often be lower than the upper permitted limits.