Growing degree-days, or heat units, help growers and researchers track the development of plants and pests.

There are two methods for calculating GDD. The first method is simpler and the second method involves higher level mathematics, but is more accurate, especially at cooler temperatures.

The Baskerville-Emin method fits a curve to the various temperature points that are greater than the base temperature, then calculates GDDs from the area under that curve. That’s a little more math than most people can do on a piece of note paper, but it does a better job of calculating heat accumulation, particularly during the beginning of the growing season when temperatures are still cool. When temperatures are still cool in spring, referencing tools such as Michigan State University Enviroweather and finding nearby weather stations can help get more accurate GDD totals. 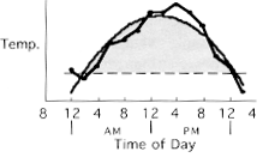 An example of the curve used to calculate GDDs using the Baskerville-Emin method.

An understanding of plant and pest development at various GDDs can be helpful in making a variety of management decisions, like cutting alfalfa and corn silage, as well as decisions on scouting for insect pests.