The urban transect is a community analysis tool that can lead to better understanding of community form and patterns.

The rural to urban transect, or urban transect, is a tool used to analyze and categorize community form and character. Alexander Von Humboldt originally conceptualized the transect to analyze natural ecologies showing the characteristics of different zones such as wetlands, shorelines and uplands. It was developed to study the differing components that make up habitats and ecosystems.

The urban transect was adopted from Humboldt’s work by New Urbanist Andrés Duany. And now subject of the Center for Applied transect Studies (CATS).

The urban transect is divided into six zones based on intensity of the built environment and physical and social character. One of the underlying principles of the urban transect is that certain forms and elements belong in certain environments. For example, an apartment building belongs in an urban setting and a farm belongs in a more rural or working lands setting. As transect zones become more urban, they also increase in complexity, density and intensity. The elements that change as an area becomes more urban include things like lighting, plantings, setbacks, thoroughfare design and building heights.

The natural zone, or T-1, is an area with little or no human impact consisting of lands approximating or reverting to a wilderness condition. This includes lands unsuitable for development due to hydrology, topography, vegetation, or special status as a protected area like a park, wildlife preserve and so on (special and unique areas). 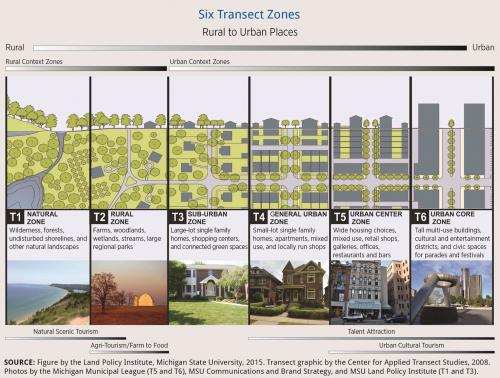 The rural zone, or T-2, is comprised of sparsely settled lands in a cultivated or open state. Often considered working lands they are made up of woodlands, agricultural lands and grasslands. The typical building located in this zone would be farmhouses, agricultural buildings, and cabins or other isolated housing types.

The sub-urban, zone or T-3, consists of low density residential areas. Setbacks are relatively deep and plantings are natural in character. There is some mixed use in areas adjacent to higher transect zones. Home occupations and outbuildings are common. Blocks are large and roads can be irregular to accommodate the natural features.

The general urban zone, or T-4, consists of mixed use but primarily residential urban fabric. A wide variety of housing types attached and detached are found in this zone. Setbacks and landscaping are variable. Streets with curbs and sidewalks define the small to medium sized blocks and street connectivity is high.

The urban center zone, or T-5, is comprised of higher density mixed use that provide for retail offices, rowhouses and apartments. Setbacks are minimal or nonexistent and buildings are close to the sidewalks, which are wide. There is a tight street network forming small blocks and high connectivity. The urban center is often the location of traditional downtowns in many cities in Michigan.

The urban core zone, or T-6, consists of the highest density and height with the highest intensity and diversity of uses. Buildings are sited on the sidewalk, which are wide and there is good street connectivity. Only our largest cities have an urban core such as Detroit, Grand Rapids, Flint and Lansing.

These transect zones are based on an analysis of functioning community habitats and historical development patterns. Each of the zones represents a normative urban pattern. And each of these transect zones can change over time and intensify to a more urban zone. A discussion of the numerical characteristics behind the urban transect can be found in the article, The numbers behind transect classifications.

The urban transect can be used as a basis for a form based code by calibrating the differing districts to the transect zones. For more information on applying the urban transect in your community, contact a Michigan State University Extension Land Use Educator.

From Exclusive to Inclusive: The evolving single-family zone - November 10

Who Gets Grandma's Yellow Pie Plate? - Passing on Personal Possessions