Updated from an original article written by Flora Nankhuni and Paida Mpaso.

Why investment in irrigation in Malawi is critical and why creating the innovative financing mechanism for irrigation is paramount to unlocking the necessary investments. 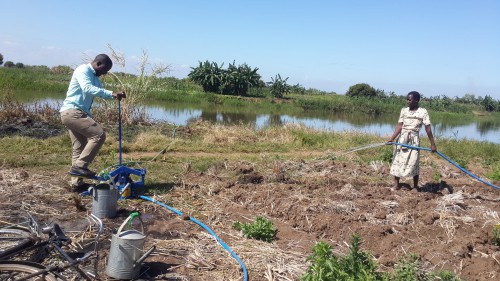 Introduction
Investment in irrigation is expensive and often requires a large sum of money upfront, with returns only occurring in smaller tranches over a long period of time (Small, et al., 1993; Rosegrant et al., 2002). As such, the type of financing that can work to profitably invest in irrigation needs to be specialized and must account for the nature of irrigation farming as well as the attributes of the specific value chain(s) to be irrigated (Turral et al., 2010). Standard loans simply do not work for irrigation because they are not designed to allow investors to repay loans over a long period of time in a profitable manner (Cuevas and Pagura, 2016). The high interest rates, lack of grace period before initial repayment is required or interest rates are charged, and the short repayment periods of standard loans are simply inappropriate. The institutional arrangement under which irrigation is implemented also matters and should be taken into account in the design of financing mechanisms for irrigation (Small, et al, 1993; Burney and Naylor, 2012).

This policy note is written with these issues in mind, which also form the basis of the rationale for designing and implementing a specialized financing mechanism to kick-start irrigation investments in Malawi. Details of the financing mechanism referred to in this policy note have previously been proposed and presented by the Ministry of Agriculture, Irrigation and Water Development in a concept note titled, “Intensive Irrigated Food Production.”

a) Irrigation can have many benefits – increased food security, nutrition, resilience, jobs, incomes, and export revenues
Irrigation has been shown to improve food security nutrition and climate resilience, while offering opportunities for improved livelihoods from commercial production and sale of crops and livestock (Dillon, 2008; Benson, 2015; Domenech, 2015). In the absence of irrigation, dry spells occurring during the rainy season can have devastating effects on rain-fed crop and livestock production, as recently witnessed in Malawi during the 2014/15 and 2015/16 farming seasons (MoAIWD, 2016). With climate change taking place while the Malawian population that needs to be fed continues to grow, irrigation will have to be an important instrument for building resilience of a robust food supply system in Malawi.

b) Current institutional arrangements for financing irrigation in Malawi are not properly designed and therefore are not working
Past efforts to ramp up irrigation financing in Malawi have been limited and in cases where they existed they have mostly not worked, as witnessed by the high loan default rates, poor management of irrigation schemes, and failure to scale up irrigation despite the country being water-abundant. High loan default rates and poor management of irrigation equipment have been attributed to institutional arrangement and capacity problems i.e. investments were largely implemented through government systems and dysfunctional cooperatives or water users association, with little or no capabilities of implementing fees (pricing) of irrigation services and water access. Anecdotal evidence suggests that many farmers and villagers have also tended to treat loans or irrigation projects implemented by government as a subsidy rather than as a loan that has to be repaid with interest. As such there has been an attitude of abuse towards such subsidies and programs, resulting in defaults or damage or vandalism of irrigation equipment.

d) Similar Innovative Financing Mechanisms for Irrigation and Agriculture in General have worked elsewhere
Several countries have implemented similar financing mechanisms to attract investment in irrigation for improved food security, nutrition and farm livelihoods. For example, the Brazilian federal government subsidized loan interest rates for agriculture through the National Rural Credit System (SNCR), with the type of financing dependent on farm size. Large-scale irrigation farms benefited from longer-term financing at concessional interest rates based on agreements established between government and commercial banks (Westercamp et al., 2015). Financing for these agriculture loans was mainly funded through levies on the banking sector and federal budget resources, with distribution and administration of loans open to all categories of financial institutions. In some instances, the loans were linked with output off-take programmes with government providing crop purchasing guarantees under the food acquisition programme (programa de Aquisiciao de Alimentos), a strategic component of Brazil’s Zero Hunger (Fome Zero) food security programme.

Under a separate financing mechanism, the government of Brazil also established a variety of public–private partnerships (PPP), which essentially subsidized part of the irrigation investments, while creating administrative concessions for private companies that financed completion of construction of irrigation infrastructures, with the provision that they would serve as concessionaires and provide irrigation service delivery for profit. One of the projects under this initiative is the Pontal Project located in the state of Pernambuco, near the Petrolina/Juazeiro fruit cultivation hub, which encompasses 30,000ha. The financing and concession term was set at 25 years with structured payments; 10% paid in a single instalment on the date that construction of the main irrigation works was completed, 40% payable monthly within five years when irrigated production takes place and 50% paid monthly for the remainder of the financing term period (La Porta Arrobas and Lopes Enei, 2009). In this arrangement the winning bidder for the concession contract was given the responsibility of mobilizing the necessary capital be it from private equity, commercial banks, or other sources.

Recently, Netafim (an Israeli irrigation company) has sourced about half a billion dollars to invest in drip irrigation in developing countries, particularly in China and India. The firm, working with governments and several international banks, including HSBC, Mizrahi-Tefahot Bank, Migdal Insurance and Financial Holdings, Union Bank of Israel, and Israel Discount Bank, has essentially secured government contracts to install irrigation infrastructure in the countries agreed upon through tripartite negotiations involving Netafim, the respective governments and international banks.

In Ethiopia, Netafim is implementing a $200million irrigation investment project on 7,000ha in partnership with the government-owned Ethiopian Sugar Corporation. Financing is provided as buyers’ credit, fully guaranteed by the government of Ethiopia, payable in tranches against milestones of the project. Under this arrangement the credit is transferred directly to Netafim as payment for exports. The government sugar company will repay the credit over 9.5 years, and the repayment risk is insured by a consortium of insurance companies that includes Ashra Israel Export Insurance Corp. Ltd. and international insurance companies.

In the United States, the Federal Government established the Farm Service Agency (FSA) to offer subsidized interest rate loans to family farms (Westercamp, et al., 2015). Much of the FSA’s success has been attributed to linking provision of credit with close monitoring systems and capacity building service provision, to ensure that irrigation and farming activities are in line with planned projections necessary to repay the subsidized loans. As part of the process, farmers benefiting from FSA financing are expected to graduate and eventually receive financing from the Federal Credit Agency or other commercial banks, whose interest rates are not subsidized.

Finally, in Morocco, the European Investment Bank (EIB) along with other financiers including the World Bank and the African Development Bank supported the government to finance implementation of the National Irrigation and Water Saving Program with the goal of converting surface irrigation to drip irrigation on nearly 550,000 ha – a total investment value of 4.5billion. Up to 333,000ha had already been converted by 2012 and the EIB had approved a loan to the tune of €42.5million for the program to convert an additional 21,405ha of existing public land with as many as 8,000 small-scale farmers benefiting.