Know your winter wanderers, because you could be mistaking the western conifer seed bug for an assassin bug, or worse, a brown marmorated stink bug.

On sunny, winter days, it is not unusual to find a slow-moving insect or two indoors, on the windowsill or wall. Concern over who the visitor is has increased since last year when the brown marmorated stink bug entered our lives.

Before, the unwanted guest could be annoying, unwanted or repulsive. Now, people are in fear that the insect invader could also be very bad smelling. However, insect identification is a specific science and people often misidentify their home invader and become very distressed.

The western conifer seed bug is native of the United States. For a number of years, it was found in western states like California, Nevada and Oregon. Then, it began its slow migration across the country. It made its way to Michigan in the late 1980s and now is found as far east as Maine and New Brunswick, Canada. They recently have been found in Europe.

Being a true bug, it feeds with its piercing-sucking mouthparts on the gooey goodness inside of conifer seeds. The trees still produce cones, but there may be no viable seeds. For homeowners with trees in the landscape, this makes very little difference. Tree favorites are Douglas-fir, Scotch pine, white spruce, white and red pines.

The western conifer seed bug has a body length of 3/4 of an inch with a brownish top. There are checkers of black and white along the margins of the lower portion of the back. But the fastest way to identify the western conifer seed bug is to look at the lower hind leg. It is widened on each side of the leg and looks like a tiny leaf has been attached. Stink bugs and other look-alikes will just have a straight, cylindrical leg. 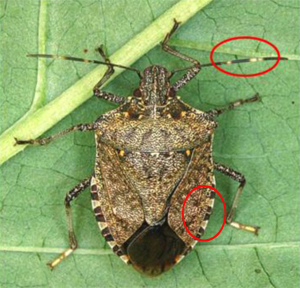 Western conifer seed bugs spend the winter as adults and often find their way indoors where their loud buzzing sound when flying attracts attention. When crunched flat, they have a distinctive, musky, evergreen-turpentine odor. They have been called many things, but rarely by the correct name. They are often confused with squash bugs and assassin bugs, as well as the brown marmorated stink bug.

Squash bugs are a pest in many gardens where they destroy the leaves on zucchini, pumpkins and other members of the cucurbit family. Squash bug adults do not spend the winter as adults – and no one will ever find them squeezing through a crack to come indoors any time of the year.

Several years ago, the papers carried articles about an assassin bug called the kissing bug. In the southeast part of the United States, this bug was blamed for transmitting African sleeping sickness. This insect also resembles the western conifer seed bug. There are assassin bugs in Michigan, but they do not carry any diseases.

To add insult to injury, the poor western conifer seed bug was tagged with the wrong name when it first appeared in Michigan. Entomologists first misidentified them as the leaf-footed pine seed bug. So it’s been a long road to the recognition they so richly deserve. If there are evergreens with cones in the area, your mystery house guest may be the western conifer seed bug. So check that hind leg and relax.

Register today!
Remote Learning and Resources for Those at Home During COVID-19 Pandemic