What is spruce decline and what should you do about it?

What’s wrong with the blue spruce trees in my neighborhood?

Colorado blue spruce trees have long been among the most popular conifers for landscaping in Michigan and the upper Midwest. Blue spruce trees are widely planted due to their good growth rate, stately form and, of course, their blue foliage. Unfortunately, blue spruce trees are subject to a wide range of insect and disease problems that can impact their growth and aesthetic appeal.

The prevalence of diseases on blue spruce trees has intensified in recent years and trees are declining rapidly in many areas (Photo 1). The key symptom of spruce decline is branch dieback, which progresses over two to four years and renders the plant’s appearance unacceptable for most homeowners (Photo 2). The rapid decline of many spruce trees in Michigan and surrounding states appears to be related to an increase of canker diseases coupled with other disease and insect problems that plague the species.

There are three principle types of diseases that affect blue spruce trees: needlecasts, tip blights and canker diseases. All of these diseases are caused by fungal pathogens and each produce specific symptoms that can be useful in diagnosing the problem.

1. Needlecasts. As the name implies, trees with needlecast diseases shed needles. Needlecast fungi often infect needles on the current year’s shoots. As the disease progresses, the needles die, usually the year following the infection. As a result, trees affected by needlecasts often have an outer “shell” of live needles on current shoots and dead needles on older shoots (Photo 3). The two most common needlecasts we find in spruce are caused by the fungal pathogens Rhizosphaera and Stigmina/Mycosphaerella.

3. Canker diseases. Canker diseases are caused by fungi that infect branches or the main stem of trees. Typical symptoms of cankers are sunken areas along a stem that may ooze resin (Photo 5). Trees may produce ridges of wound tissue around older canker infections as the tree attempts to restrict the fungus’ growth. As cankers develop, they can interfere with the branch’s ability to transport water and nutrients, resulting in the death of individual branches often referred to as “flagging.” 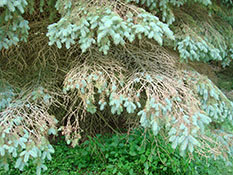 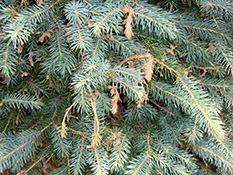 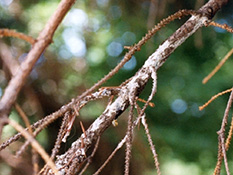 Numerous insect pests can impact spruces in Michigan’s landscape, but the two most common are gall adelgids and spruce spider mites. In both cases, the insect pests are tiny and you may need a hand lens to see them. Often times, people are more likely to see the damage as opposed to the insect pests themselves.

1. Gall adelgids. Adelgids are small insects that feed on shoots by sucking plant sap. As they do so, they cause the shoots to deform and produce galls that resemble cones (Photo 6). Damage from gall adelgids is mainly aesthetic.

2. Spruce spider mites. Spruce spider mites cause needle discoloration and eventually kill needles, which can be mistaken for a needlecast disease (Photo 7). Technically, mites are not insects, but are related to spiders. This distinction is important since not all insecticides will control mites. 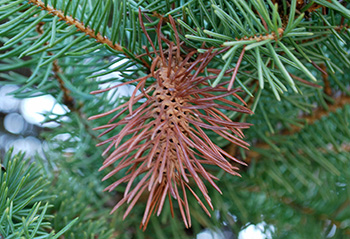 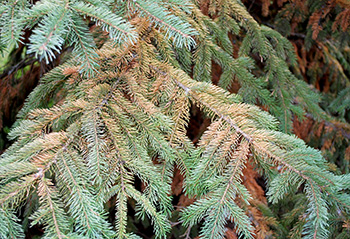 Why are we seeing increased decline in blue spruce trees?

There are a number of factors contributing to the decline we see in blue spruce trees, including environmental changes, poor site conditions and new pathogens. Colorado blue spruce is native to arid regions in the Rocky Mountains. Michigan’s climate is generally more humid, especially in the summer, which is ideal for fungal pathogens to thrive. In landscapes, Colorado blue spruces have been planted on some sites that are marginal for their success. As a result, they are stressed and more susceptible to fungal pathogens.

Finally, for decades the default diagnosis for most problems with blue spruce has been Rhizosphaera needlecast or Cytospora branch canker. However, a recent survey by Michigan State University researchers suggests two other fungal pathogens, Diplodia and Phomopsis, were much more commonly associated with branch death and tree decline than Cytospora (Photos 8-9). Diplodia and Phomopsis are both considered weak or secondary pathogens, so it is unclear at this point why they appear to cause major disease problems for spruce. Also, in many cases there may be more than one issue that is affecting your tree’s health. 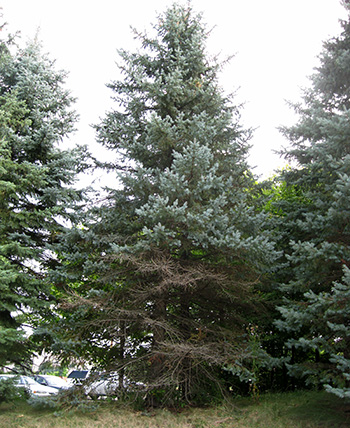 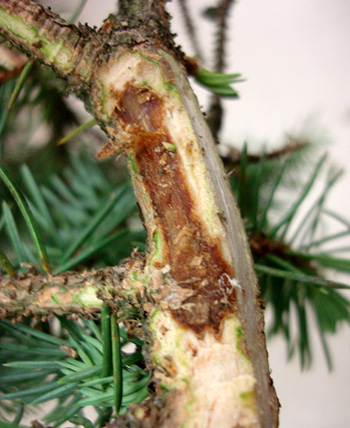 Can I do anything about these spruce problems?

As with any tree health problem, the first step in dealing with declining spruce trees is to diagnose the problem and identify the cause. For large or important landscape trees, homeowners should contact a professional arborist or tree care company.

For some disease issues, such as needlecasts, fungicides may be effective in preventing or controlling the disease. It is important to note that fungicide treatments for needlecasts only protect new growth. For control to be fully successful, it may take two to three years of yearly fungicide applications. For canker diseases, the effectiveness of fungicides is usually limited. Removing affected branches is usually the best action to improve the tree’s appearance and slow the spread of disease within the tree.

For insect or mite issues, insecticides or miticides can be effective, however selection of the proper product and timing are critical.

Should we continue to plant blue spruce trees?

This is a difficult question. Although spruce decline is widespread and appears to be increasing, it is not a certainty that all trees will be affected. In fact, it is not uncommon to see healthy, thriving spruce trees near or adjacent to trees that are in severe decline. Another complicating factor is that trees may be healthy for a number of years and then begin to decline as they mature and are more difficult and costly to remove.

The likelihood of having success can be improved by planting blue spruce trees on sites with conditions they favor. Key site factors for blue spruce trees are full sunlight, good air movement and excellent soil drainage. Michigan State University Extension recommends homeowners diversify their landscapes to help make their landscapes more resilient to pest and environmental changes, and seek to plant a variety of species wherever possible.

Print a PDF of this article.